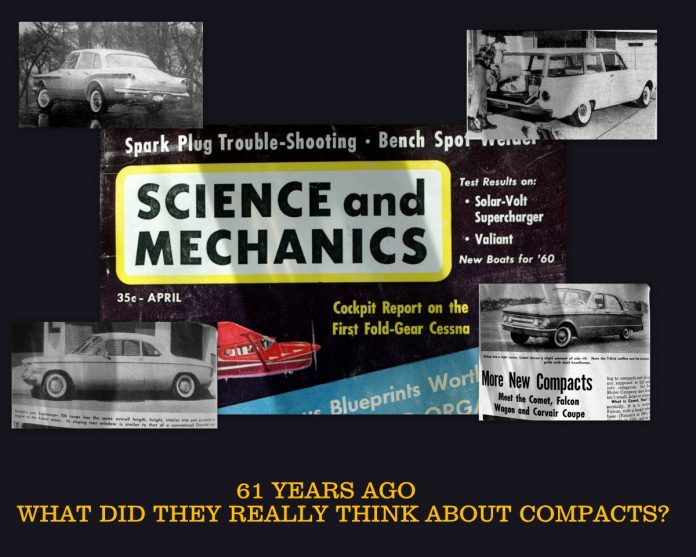 1960 was a pivotal year for the domestic car builders, particularly the Big Three (General Motors, Ford, and Chrysler) because the dawn of a brand-new decade also required a brand-new automotive style.

It is no secret the late 1950s automotive era was defined by tailfins, a design trend that was on its way out in Motor City as car companies headed into the Sixties, even though a convincing case could be made for 1960 as the last big year for fins on domestic cars built by the Big Three.

1960 also marked the dawn of the compact car for the Big Three, although domestic compacts were already offered by American Motors and Studebaker by the late 1950s.

A major United States recession in 1958 became an event that ignited interest in economical vehicles. The result was a lower cost, smaller vehicle that produced better MPG and could hold its own on the faster interstate freeway system that began under the Eisenhower administration in the 1950s.

Many of the early freeways offered higher speeds (typically 70 mph) that prompted domestic car makers to build faster cars, a fact not lost on the Big Three when they built compacts, even though many customers liked their smaller size for urban use.

The higher speeds were important to Motor City builders because they wanted an advantage over the Volkswagen Beetle, a small import car that was a serious thorn in the side of domestic builders due to its incredible popularity with North American car buyers. The downside to the Beetle was its slug-like speed, a major disadvantage that was not lost on the Big Three.

Consequently, GM, Ford and Chrysler offered more power and a bigger passenger compartment than Beetles when they introduced their compact models in 1960. The occasion was duly noted in an April 1960 edition of ‘Science and Mechanics’ when the publication tested the new Big Three compact models in a comparison article.

The test models included Chrysler’s Valiant, Ford’s Falcon, and GM’s Corvair. The Corvair mimicked the basic air-cooled engine feature of the VW Beetle-but in a more powerful and much faster version. However, the main goal for the ‘Science and Mechanics’ report was a comparison between the Valiant, Falcon and Corvair, a fact not lost on MyStarCollectorCar because the article was a snapshot of a bygone era when these cars were brand-new.

The speed comparison between the three cars was interesting because the writers wanted to know whether these compacts could indeed run with the big dogs on the freeways. None of the vehicles offered V-8 choices in 1960, so their builders had to squeeze as much performance as possible out of their four and six-cylinder engines.

The compacts did not produce neck-snapping acceleration, but they would blow by a Beetle or any other Euro sub-compact on the road. The Valiant led the way in acceleration and top speed (roughly 90 mph) compared to the Corvair and Falcon (about 82-83 mph), mainly because Valiants had the famously peppy Mopar Slant Six under their hoods.

The Ford Falcon was the only 1960 Big Three compact to break 20 mpg in combined city/highway fuel economy, while the Corvair came up last with a 17.5 mpg city/highway figure.

It was clear the ‘Science and Mechanics’ writers wrote about a new (to them) kind of car in their April 1960 issue. They commented on whether the compacts were truly economy cars (in mpg terms) by comparison to the even smaller sub-compact imports at the time, so the jury was clearly still out for the writers regarding the compact cars’ frugality.

The most intriguing factor for us here at MyStarCollectorCar was an article from a 61-year-old car magazine that was frozen in time and discussed the dawn of the compact car in North America.