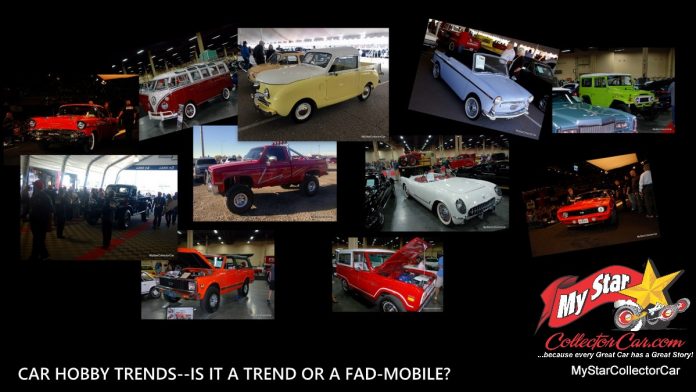 The annual TV car auction in Arizona helps set the price trends in the collector car hobby for the upcoming year.

This year’s edition had some old favorites, along with some new members of the Fad-mobile fraternity. Just to be clear, a Fad-mobile is any vehicle from the past that suddenly became a rock star at the Scottsdale show.

The common denominator is a flavor-of-the-week Fad-mobile vibe that connects the vehicles because they have a sudden and inexplicable price rise that pushes them into the spotlight and well above their former price tag.

The giant price increase is typically fueled by the unusual nature of the auction vehicles, although heavy alcohol consumption by auction bidders may also play a role in the vehicles’ price spikes.

Former famous examples of Fad-mobile stars include Volkswagen micro-buses that bounced back from the hippy market and were long forgotten after too many acid trips, alleged land/water cruisers called Amphicars with original sales numbers that sank faster than the Titanic, and three-wheeled refrigerators named Isettas that cashed in heavily on the terminally cute market at past Scottsdale auctions.

The 2021 auction had some new favorites and some old favorites vying for the top dog award at the event. One thing was abundantly clear: prices are soaring in the vintage vehicle market.

One of the surprises in this area was the big prices for the Tri-Five Chevys (1955-57 Chevys) at the Scottsdale auction. These models have always been popular in the car hobby, but many believed the Tri-Fives had already reached their peak price and were now headed directly toward a landing pattern because their largest fan base (70 years and older) were no longer active buyers.

The Scottsdale auction proved otherwise because rare original (and custom) Tri-Five Chevys sold for well over 100k and broke the glass ceiling for high end collector versions. Additionally, the sales durability of classic Dodge Power Wagons (in both stock and modified versions) continued at the Scottsdale auction.

1969 Camaros also proved to be hot commodities at the auction, both in rare stock versions and resto mod editions. The ’69 Camaro was always considered to be the top stallion in GM’s first-generation pony cars, but its popularity was off the charts in Scottsdale and pushed the cars well above $100,000 for the 1969 Camaro’s best and brightest.

The Camaro’s flashy stablemate Corvette was also driven to new price heights at the Scottsdale auction. The 1950s edition Corvettes sold extremely well if they were connected to a new age chassis and powertrain, while the 1960s Corvette models sold for big bucks if they had big factory horses under the hood-or were new age resto mods.

Honorable mention in the famous pony car category goes to performance Mustangs from the Sixties and early Seventies. Prices went through the roof on these famous Fords, both in stock and resto mod form.

Square Body Chevy trucks have stepped into the spotlight in a big way, particularly the 1970s versions, although the 1980s models have also taken flight in the vintage vehicle market. The biggest price tags were reserved for Blazers, Jimmys-or any other vintage original or resto mod GM truck from the past for that matter. Except an electric resto mod Chevy pickup- it was dead last in the high end vintage GM truck price wars.

It is still too early to label the Square Bodies as Fad-mobiles, given their long production run and impact on a younger generation of car guys, but resto mod versions have also rocketed past the 100,000-dollar mark in a big way.

Some of the more likely candidates for Fad-mobile membership include the early Ford Broncos, early Toyota Landcruiser models, and even the IHC Scouts. The current automotive market trends heavily toward sport utilities and the aforementioned vehicles are early versions of sport utility vehicles. The early sport utility vehicles blew well past the 100-k mark at Scottsdale, both in stock and resto mod form.

However, it remains to be seen whether the Bronco and its vintage sport-ute colleagues can hold orbit and avoid crashing back to earth as flavor-of-the-week entities at the Scottsdale auction.

Nevertheless, prices are definitely up for all vintage rides.