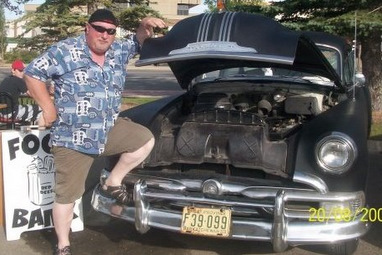 Fred Scaiffe is, (as the late, great James Brown used to say), “the hardest working man in show business”.

‘Fred runs a food bank in Red Deer, Alberta, Canada and as the economy goes down, Freddie’s business explodes, so his job went from very hard to insanely difficult in 2009.’

Fortunately, Freddie has a great pressure relief valve in the form of this classic ’53 Pontiac Chieftain 2-door sedan.

Among his many other duties, Fred works a weekly car show and shine with a fundraiser barbeque and last year he spotted this big old Chief at the show.

Happily for Freddie-it was for sale. 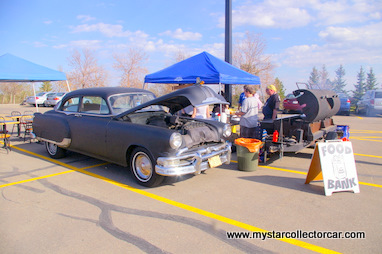 Fred remembers his dad’s and his uncle’s early 50s Pontiacs and the thing that really struck him was the light in the famous Chief hood ornament. This Poncho had that great feature and Fred fell victim to the legendary disease of Nostalgia Fever.

The owner didn’t beat Fred up on the price and this ’53 Pontiac direct from American Forks, Utah got a new home. 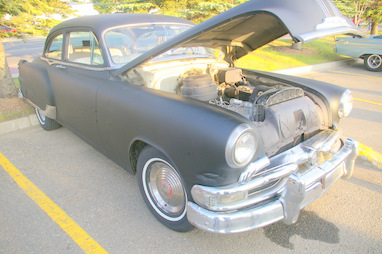 This is a very well optioned car with the 4-speed automatic, power steering and brakes and the legendary straight 8 flathead motor-arguably one of the world’s smoothest running production engines-then or now. 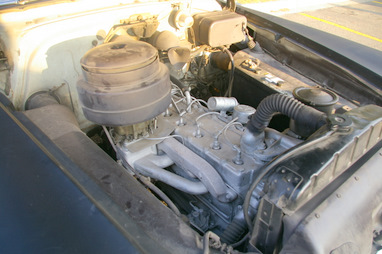 Freddie feels like he’s part of the club now and plans to use the big old Poncho to haul the food bank mobile barbeque to various events. He’s  one of those rare guys who can genuinely say that he has fun o n his way to work.

In fact, Fred drives the car every day because he “didn’t b uy it to look at it or work on it”. His only concession to the 21st century was a portable Mp3 player because the car “drives a lot better with 50s tunes”. Freddie is fearless in the old Poncho-he’s done quite a few trips through the Canadian Rockies and yes, ladies and gentlemen-this car is bone stock right down to the 6-volt battery.

Freddie’s had a few adventures in the old Chief including an incident on Vancouver Island where the old soldier died a few hundred feet from his destination thanks to a faulty voltage regulator. No problem.

Help came right away from an unlikely source-a soccer mom and her kids in an SUV. She was so concerned about Freddie and the old Pontiac that she boosted his battery and and didn’t leave until Freddie was safely parked. That’s the magic of the old car experience that Freddie loves.

The biggest highlight for Freddie and his loyal Poncho came when the car was part of his daughter’s wedding-you simply can’t put a price on that kind of automotive experience. Freddie’s quote on that-“it’s way bigger than doing 200 miles per hour in a Ferrari”.

The other high point for Freddie came from giving his grandmother a ride in this early 50s classic-she was thrilled but a little worried about Freddie’s driving. Like he said, it’s a regular daily car so he drives it like it’s a new Lexus.

FEBRUARY 2012 CAR SHOWS AND CLUB EVENTS PLEASE CONTACT US TO...