Ike Martens has a very simple automotive philosophy-anything between 1955 and 1965 works for him.

Everything else is pretty boring in Ike’s world.

This 1963 Ford Galaxie XL is a classic example of how one guy loves an era when most guys like a brand name.

The ’63 Galaxie is a completely original, unrestored vehicle  with 76,000 documented miles.

The original owner was an older guy who happened to live in a mild dry climate. He looked after it like a newborn infant and died long before any real miles were clocked on the odometer. After that this upscale model 60’s Ford ended up with a series of “Mopar or no car” owners.

Clearly they were too embarrassed to drive the mint Galaxie so even though it had many masters after the old guy owned it very few miles were racked up. 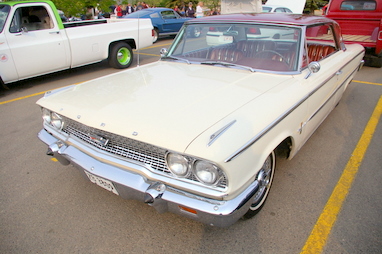 Ike has no such bias-he loves all the iron from the classic 60s decade and he remembered coveting a ’63 Ford that a buddy owned back in high school. Those styling cues were a Holy Grail to Ike-he’s a huge fan of the early ’63 2-door hardtop over the later 63 1/2 fastback roof line. 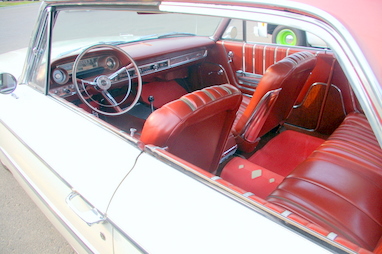 This car even has the original floor mats that the first buyer bought to protect his carpets and they’re just like the overall car-in mint shape.

His only departure from stock? The addition of period-correct fender skirts. Ike saw them like that back in the day when the ’63 was new and he firmly believes that they should be mandatory on every 1955-65 era car.

Ike is justifiably proud of the big Ford and unlike the biased Mopar-centric guys who used to own it, he is really proud to drive it.

You have to believe that this car is finally home.