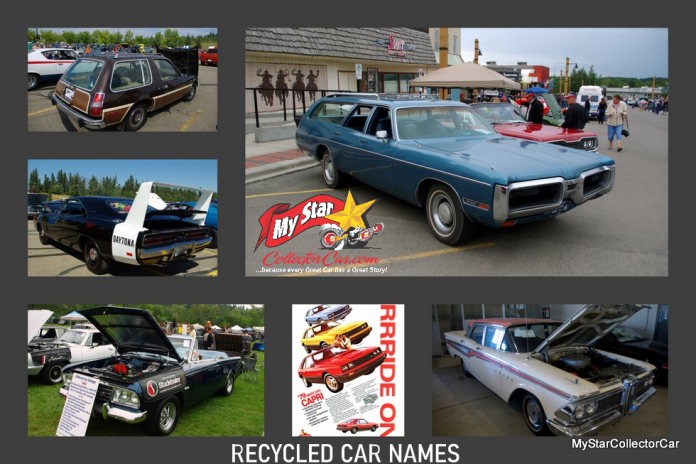 A car commercial blazed across my TV screen and reminded me of the recycling program as it applied to car names.

Ford likely realized six decades were enough time to make people forget about the Edsel Corsair, therefore they could use the name for one of their new Lincoln models.

The Edsel name on its own was enough to make it an automotive version of the Titanic and Hindenberg, albeit with less loss of life and more loss of sales during its fateful production run, but few people are aware of its specific models, a fact that brings us to our second addition to the recycled name list: the AMC (and Edsel) Pacer.

The AMC Pacer debuted in 1975 and lasted until 1980 as a highly unconventional compact built during the Me Decade. American Motors was willing to take chances when it came to their cars, but their Pacer models may have been a serious overreach for the small car company. Saddling the car with a name used by a legendary failure like the Edsel was a big gamble for AMC-and may even explain why people should just say no to drugs. Particularly if their job is to name car models.

The third members of our recycled car name list are the Daytona models. Most people associate the name with the legendary Charger Daytona muscle car built in limited numbers from 1969 until 1970 so Dodge could offer an aerodynamic race car for NASCAR competition.

However, the Studebaker Lark Daytona was built from 1959 until 1966 when the Studebaker brand left the building for the final time. Studebaker was an innovative company, therefore their Daytona models were faster than their boxy style suggested at the time, but the death of Studebaker allowed Dodge to scavenge the name for their iconic Charger Daytona models.

There have been other Daytona models produced by Chrysler since the 1969-70 Charger Daytona, but the first Mopar Daytona’s wild style and brute force horsepower will always be the high-water mark for the name- with all due respect to Studebaker from the past and the Mopar successors with the same name.

The fourth addition to our list is Capri, a name that was initially associated with the large-and-in-charge elegance of the 1952-59 Lincoln and later became a part of the small compact Ford Capri models during the early 1970s and subsequently with the Mercury Capri version of its Fox Body stablemate Mustang in the 1980s.

Apparently, Ford had a better idea for the Capri name when the auto company resurrected it for the nimble little early Seventies versions, as well as the Fox Body models for its Mercury dealerships. It was an interesting decision when Ford steered the Capri name in a brand-new direction at the time.

The fifth and final name on our MyStarCollectorCar list is Suburban, a name that has been associated with GM light truck transport vehicles since its debut in 1935 until this very day. However, Plymouth borrowed the name for its station wagon editions from 1949 until 1978 and it became most famous as a kid-hauler for TV’s Brady Bunch in the early 1970s.

Both versions of Suburbans (Plymouth and Chevy) were largely designed for indoor storage of people and goods on the road. The GM Suburbans could handle more rugged conditions because they were built on a truck chassis and took a pounding under hard use.

Lee Iacocca’s Chrysler headed in a different direction when Mopar introduced the Magic Wagon minivan in the early 1980s and saw no need to resurrect the Suburban name for these new front-wheel drive soccer mom vehicles. Therefore, GM was once again a standalone company when it came to domestic Suburban models.