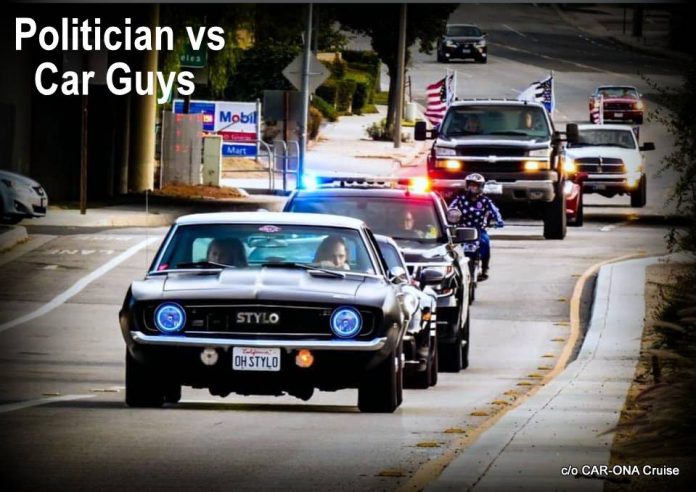 The car hobby is an oasis from the real world for a simple reason – positives and negatives don’t mix.

Car guys across the globe know how committed the car hobby is to supporting local communities – you could successfully argue car guys are the most generous and selfless when it comes to giving back and CAR-ONA is no exception but they recently ran into problems.

Richard Bradbury is one of the founders of CAR-ONA – he explained how it began : “The cruise started as a way to help my daughter deal with anxiety and depression after losing her job as a manicurist during the shut downs in California”.

“We started with a small group and called referred to it as a mobile car show.  We call it CAR-ONA Cruise, kind of a play on words.  We have done many events to help with community support including our largest with between 800 – 1,000 card for the memorial of Sgt Ron Helus and the Borderline 12”.

***Borderline 12 was a mass shooting in 2018 where Sgt Ron Helus died in the line of duty.

Richard explained how she was concerned about CAR-ONA’s link to police: “Our cruise group donated snacks and drinks to the police department before these protests to show our support for the law enforcement officers and help save money on supplies. Our cruises actually help boost our local economy, people buy gas, eat at restaurants after the cruises, and support local businesses in which they connect with through our group”.

“She is all about pushing her political agenda even though we never promote ourselves as a political cruise, I think she also doesn’t like that we support law enforcement, many of our cruisers fly American flags and Blue Line flags as well”.

Richard added: “We do support people’s first amendment rights to decorate their cars in any way they would like. That is a big difference with this cruise group, we do not discriminate. We don’t discriminate on type of car, color of skin, political affiliation, religion, or anything else.  All we ask is that people be kind and obey all traffic laws”.

Michelle Schumacher is another active participant in the CAR-ONA Cruise and she wanted to emphasize the public relations side of the event: “I think it’s worth mentioning that the cruise has done a lot for our local law enforcement. We hosted a food drive during the protests and brought SVPD some goodies along with a parade around the station to show support and around the city.

Unfortunately, politics threaten to derail a great event, but the biggest lesson is found in Michelle’s thoughts on what they’ve accomplished in a few short months.