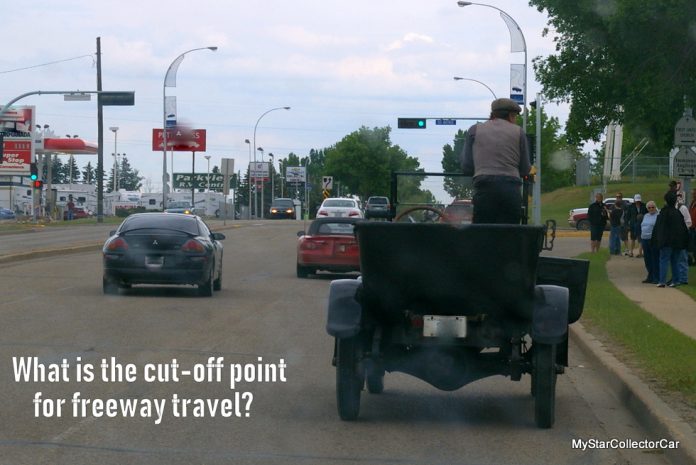 There was a tragic accident in the famous 2019 London to Brighton Rally after a 1903 Knox Runabout collided with a truck on the M23 and sadly, the victim was a well-known car guy and philanthropist.

The driver accidently drove his 116-year-old car onto the motorway (British freeway) where the speed is 70 mph and access is limited to vehicles that can handle the speed and the result was catastrophic.

The question is simple—which decades from 1900-1960 could safely handle the M23?

The London to Brighton Rally era (vehicles up to 1905) would have no vehicles that could handle 70 miles per hour in heavy traffic.

There were specialty vehicles like the land speed record-holding, 200-horsepower, 1905 Darracq (top speed 108 miles per hour) but the Knox Runabout was a more typical 35 miles per hour.

The next few decades saw the rise of super cars like the Duesenbergs, Cords, Packards but the 1910-20 era was dominated by the Model T. Model Ts were affordable, simple and reliable but their top speed was well below the 70 miles per hour limit on a freeway. Not only that, the Model T brakes have been described as “two skinny skid marks just before impact” because they only had crude “band wrapped around transmission” brakes with a rudimentary e-brake at the rear wheels.

The 1920s brought some speed to the game so a 20s era Duesenberg could hit 120 miles per hour and a 30s era Duesey could hit 140 miles per hour so they could run comfortably on a freeway. Hopefully there wouldn’t be a quick braking maneuver required because while the technology was cutting-edge 90 years ago, it would be a white-knuckle experience in 2019.

Mainstream cars like the 1920s Fords, Chevys, Dodges and Oldsmobiles would struggle to come close to 70 but the debut of the OHV 6-cylinder brought the Chevy close to the goal. The 30s era Ford flatheads would nudge 70 miles per hour with a tail wind and a downhill slope but in every car you’d spend all your time in the slow lane—barely keeping up.

Post-war cars took the game up in a big way. The Cadillacs of the past could easily push the limits at 70 miles per hour but in 1949 they introduced an OHV V-8 and it was built for the open road. Chrysler followed with the first generation hemi and the freeway cars were born.

These cars could definitely handle 70 miles per hour but the soft suspensions and drum brakes would keep you clutching your Saint Christopher (patron saint of travelers) medal through the whole trip.

Late 50s cars were built for the new freeways so 70 miles per hour capability is built into their DNA. Detroit even called one of them the Turnpike Cruiser and you would always see these brutes in the fast lane because they could handle it—back in the 50s.

These cars could safely navigate turnpikes because every driver had the same vague steering, iffy handling and long braking distances. A guy in a brand new Toyota has more braking and handling than the winning car at the 1959 Indy 500 so he assumes your ’59 Olds has the same traits—just before he cuts you off at 85 miles per hour.

That’s the problem because—unlike the turn of the century cars—there’s little doubt the ’59 Olds would run all day on the M23. Just don’t expect it TO stop LIKE A NEW CAR …that’s the cut-off point.

APRIL 2010 FALLEN STARS:THE SAD SIDE OF THE HOBBY