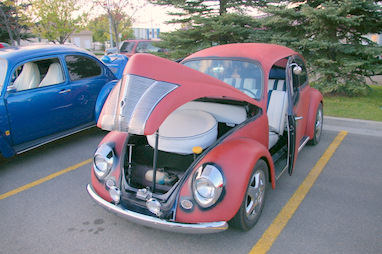 ‘This icon of the hot rod world appeals to many enthusiasts, the price went insane on the old classics and consequently Travis had to file it under future considerations.’

Happily he’s also a huge Volkswagen Beetle fan, they are considerably easier to find so Travis found a way to make both worlds work together.

Travis found a Beetle and turned it into a ’40 Ford clone. He took a kit ’40 Ford VW front end and gave his German car a war era Ford look. That was the easy part because the kits are relatively easy to install and Travis is an old school hands-on guy.

But he wanted more-things like a ’40 Ford rear window and tail lights, suicide doors and air suspension so the job took a little longer but he’s almost there. Travis is part of the giant VW air-cooled fraternity and his car is a fixture at local shows in his area. The shows that are 100 miles away are a little more of an adventure because the Beetle’s air suspension gets a little unpredictable at 70 miles per hour.

That plus the fact he travels with his kids to most shows means that highway excursions are done at a leisurely, but safe 55 miles per hour. Yes, now he’s immune to that standard kiddies car travel battle cry “are we there yet?”

This is a typical car project in perpetual building state and some things had to be eliminated–like non-legal fog lights thanks to an encounter with a suddenly blinded law enforcement official but Travis is doing the right thing in car world-he’s having fun with his car and sharing the experience with his kids.

‘That’s the kind of foundation that the hobby is built on.’