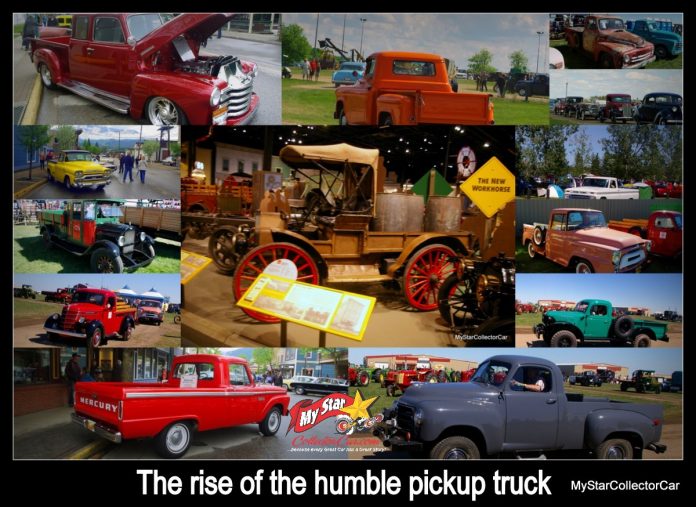 The pickup truck is an essential component of North American automotive history and enjoys rock star popularity to this very day.

The rock star analogy may even be mild because the pickup truck has been a part of the automotive landscape since the early days of the industry and somehow never got old or dead like actual rock stars.

New trucks have become people-haulers with more onboard creature comforts than a fully loaded Cadillac from the past. The new trucks also have more doors, more power and better gas mileage than their vintage pickup predecessors, but older and newer trucks do share a common bond of enormous popularity.

The dawn of the pickup truck took place before Henry Ford introduced his assembly line-built 1925 Model T truck and was based upon the simple concept of a wagon that was typically pulled by a horse named Paint and his hard-working equine buddies The buckboard ride of the horseless wagon was a horse-drawn wagon carryover that allowed the wheezing motorized versions to haul heavier loads over longer distances.

The evolution of the internal combustion engine meant the early motorized trucks could indeed haul larger loads than pony-pulled wagons, even if their stiff ride still mimicked the horse-drawn versions. Eventually the early pickup trucks became slightly more comfortable than a horse-drawn wagon, but their primary function as a basic work vehicle was still the major reason for their existence.

The pickup truck was a purpose-driven vehicle specifically built to handle hard work on job sites and farms. They worked until they couldn’t work-and then they were either crushed or banished to rusting in peace in a forgotten corner of the property.

The pickup truck was built in enormous numbers over the ensuing decades, but very few of them survived because the trucks were used up in a big way. A few beat-up versions found their way to movie fame as props for a Hollywood portrayal of rugged individualists, but most disappeared off the face of the planet.

Fortunately, the pickup has always been an essential part of the car hobby because so many car guys love the style and function of a classic light truck, so they restored or resto-modded them whenever the opportunity arises.

Therefore, a classic pickup truck is a valuable commodity in both stock and modified form in today’s market, a trend that shows no signs of succumbing to the flavor-of-the-week malady attached to the vintage vehicle hobby whenever good booze mixes with big egos at a TV car auction.

The market for vintage pickup trucks has risen to incredible levels over the past few years, particularly if they were built between the late 1940s and early 1980s. Few people envisioned the meteoric rise of the 1970s-era Chevy square body pickup trucks, but the pioneer Square Bodies have rocketed into their own lofty orbit as stars in the collector vehicle hobby.