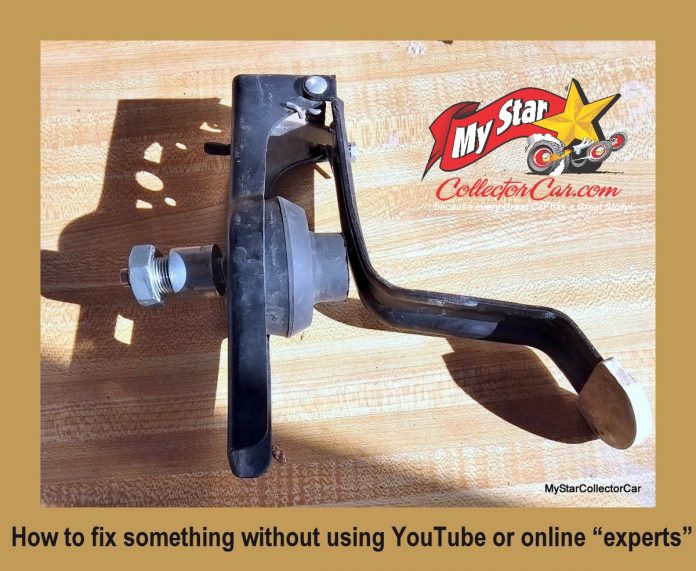 A 61-year-old car would be a senior citizen if it was a human being.

A car that somehow avoided reincarnation into a washer and dryer unit over the past 61 years earned my respect the moment I turned the key and fired it up. I have always been aware that old cars can provide nostalgia and a teachable moment on any given day, depending upon the circumstances.

I got the nostalgia vibe straight out of the chute when I drove that aging beauty, but the teachable moments also came with the territory because this car had not seen an abundance of time on the road over the past 61 years.

The first teachable moments came in the form of a fuel pump replacement (worn-out and leaking) and a horn honking issue (extremely loud and annoyingly spontaneous) that were resolved rather easily during the first few weeks. The third teachable moment was a wonky manual windshield washer unit on the car and its eventual repair.

The initial solution was simple: avoid muddy roads and learn to live with bug splats on the windshield. However, a manual washer foot pump unit that suddenly broke inspired me to repair the system.

Typically, I would seek the answers in YouTube videos that zeroed in on the issue with an incredibly boring guy at the helm of the video to instruct me; or I would have sifted through the endless array of clueless internet “experts” to find an answer. But this repair seemed very obvious-even to a mechanical moron like me.

There was clearly a major clog in the lines and/or sprayers on the car and the result was the foot pump’s metal innards could not handle the pressure, so it broke. The good news is I was correct on all counts, but the bad news is nobody in my known car guy universe could provide replacement parts to make the repair.

An ill-fated attempt to glue the broken metal pieces was not the solution, mainly because the other issue was the blocked system-so the two broken metal components blew apart like Mt St. Helens when faced with too much pressure.

The obvious step was to ensure a broken metal piece bond that no clog could put asunder, so my brother finally found a good reason to purchase a tap and die kit (at 50% off too) so he could perform the broken pieces’ reunion ceremony. The plan worked and indeed the repairs were not put asunder by clog pressure.

However, the clog was still an issue, so I took the two spray nozzles off the car and dipped them in vinegar to dissolve any mineral build-up in them, mainly due to long bouts of non-use. I was partially correct because they were jammed with debris- but most of the debris was the deteriorated rubber chunks from the ancient factory washer hoses.

Fortunately, I was able to buy replacement hoses locally and used them to complete the repair. It was yet another teachable moment that told me I can occasionally shop locally for replacement parts for a 61-year-old car.

MAY 22 STAR OF THE WEEK-FURIOUS FINS…58 PLYMOUTH