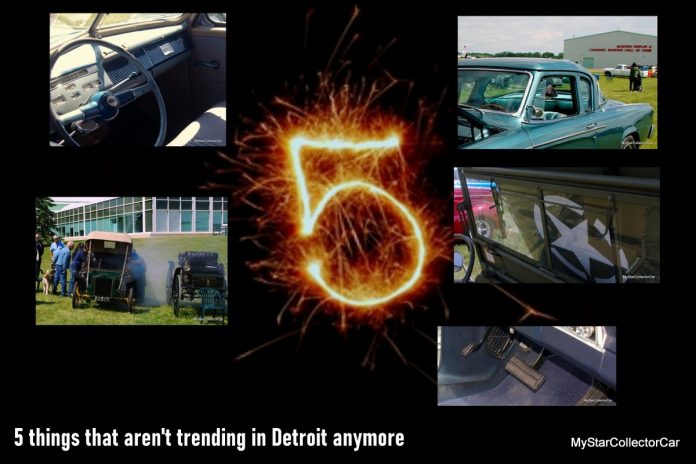 The evolution of the car has been in the mix since the early days of internal combustion engine technology when the horseless carriage replaced Old Paint on the road.

Sadly, even the internal combustion engine’s days may be numbered if green fanatics push their agenda and pressure domestic car builders to replace gas and diesel jobs with an electric motor in their vehicles by the mid-2030s. The grim reality? The current electrical grid under maximum load cannot handle 2021 consumption — let alone a future grid based upon current renewable green energy production and battery storage ability — not to mention the strip mining needed to provide materials for batteries.

The first item on our list is the hand crank internal combustion engine starter, an adventure that likely added ‘Lefty’ to many unlucky right-handed car owners’ nickname choices when the engine kicked back during the hand crank start and broke their right arm.

The dawn of the electric starter on domestic cars began in 1912 when the elegant Cadillac Model 30 sported one, but the average income car buyer had to wait until the 1920s before the hand crank was phased out of the car starter game.

Just for the record, the vacuum wiper system was based upon engine RPM and stopped working under heavy acceleration, consequently vacuum wipers were not a great way to pass other cars during a monsoon.

The third member of our obsolete car part list is the vent window. Vent windows were a mainstay on domestic vehicles for several decades and offered a cheap form of air-conditioning for passengers. A typical vent window deflected outside air into the vehicle’s interior to cool its occupants.

Vent windows started to disappear during the back nine of the 1960s and were eventually phased out during the 1980s, presumably due to cheaper auto AC costs and pampered car occupants who would never get to experience 100-degree temperatures inside a car jammed with many other kids.

Either way, a basic three-on-the-tree transmission eventually bit the dust as a choice and has become a conversation piece and puzzle for many younger drivers who are also mystified by the rotary dial phone.

The fifth and final addition to our list is the floor-mounted headlight dimmer switch. Dimmer switches are now located in the steering columns of modern cars, but they were a metal button on the vehicle’s floor for about 50 years after the floor-mounted versions replaced the column mounted switches in 1927.

The death of the floor-mounted dimmer switch occurred several decades years ago, so now they are included in any automotive meme that features obsolete automotive equipment and poses a “What’s it?” question for younger generations who are already confused by the rotary dial phone.