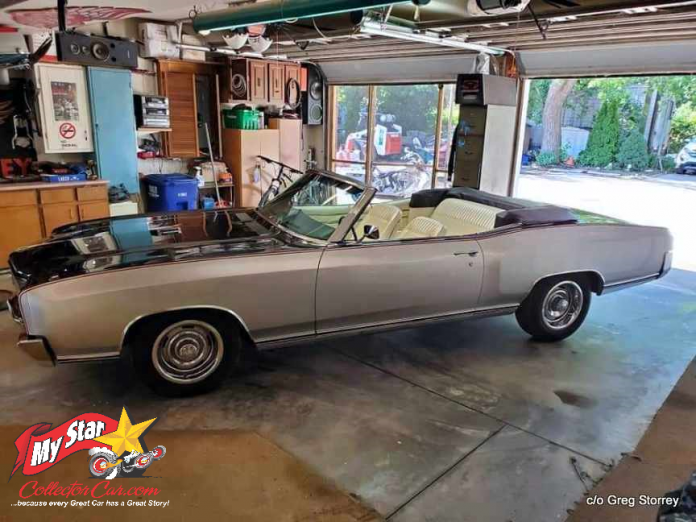 Greg Storrey is the proud owner of a very cool 1970 Monte Carlo convertible.

Greg explained how Bob was a big fan of early 70s Chevys, so he sent his brother Norm to North Carolina to pick up a ’70 Monte Carlo.

The car was basically sound, but there was a rust problem under the vinyl roof so Bob thought the car would look a lot cooler without a roof. Bob owned a few convertibles because he was an open-air kind of guy, so the Monte became a candidate.

Unfortunately, Bob passed away suddenly after mapping out the game plan for the Monte Carlo, but there was some progress. Initially, Greg had a donor ’69 Olds 442 convertible designated for the project because, as he explained, “It was pretty rusty”, but some of the parts were unusable, so that’s why a ’69  GTO entered the game.

Pontiac purists will take issue with the choice of a classic Poncho for a donor car, but it had everything needed to build the Monte Carlo to Bob’s standards. Bob was a hands-on guy, so he was there for a lot of the nasty stuff behind a build. He also spent a lot of time on the computer searching for parts, plus he turned his living room into a storage room for Monte Carlo fenders and other parts—Bob was that committed to the project. His attention to detail was off the charts, so everything was blasted, powder coated, bagged and tagged.

The Monte Carlo went through a few fabricators—the first guy was fired, and the second guy (Bob Miller) did all the heavy lifting by roughing in the work before he passed away.

The Chevy then went into long-term storage—Greg wanted it, but he admitted he “couldn’t swing it at the time”. Bob’s widow, Dani Probert kept the car for Greg until she moved and that’s when he finally bought the unfinished Monte Carlo.

Greg admitted the car “sat for three years”, but last year he decided to finish the car to honor Bob’s  memory on the 10th anniversary of his passing. Greg has worked on many cars over the years, so for this one he enlisted the help of Al Hebert—his car buddy. Al is an excellent panel-beater, so he did all the finishing work on this custom Monte Carlo.

Bob wanted the car to be painted black cherry and he had the paint, but years later, when Greg opened the can it “looked like burgundy” so he changed the plan.

Greg always liked the paint on the ’78 Indy edition Corvette, so he opted for the silver-black two-tone. He added another custom touch when he replaced the Monte Carlo badge on the trunk with Bob’s signature.

The engine was a 396 bored out 40 over to 407 cubic inches but Greg said, “Bob had a few problems with it” and “the motor started making a racket (spun a bearing)” under Greg’s watch, so he had to get it done right before the Monte Carlo hit the road. There’s a Turbo 400 automatic in the Monte now, but Greg wants to upgrade to a 700R because the overdrive transmission will help keep rpms down on a 3:43 rear end.

Unfortunately, the 10th Annual Bob Probert Memorial Ride was cancelled in 2020 but Greg did give Bob’s family a ride in the convertible Monte Carlo last summer. He even did a burnout in Bob’s honor.

That’s how you celebrate a car guy’s vision for this incredible custom.