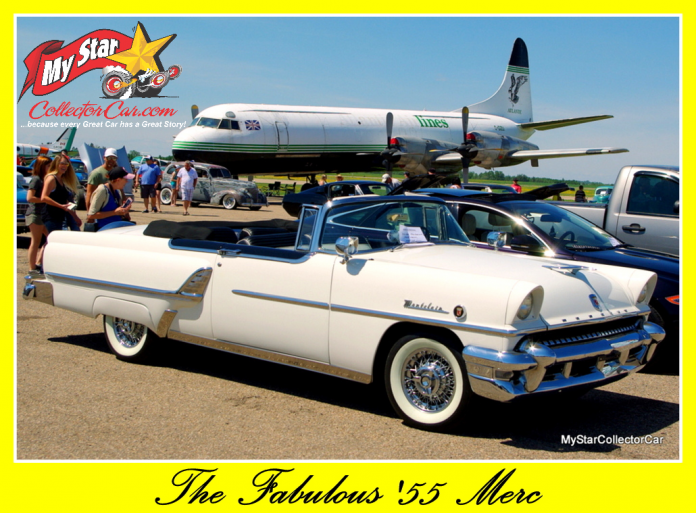 One of the most popular weekly traditions for us here at MyStarCollectorCar is our ‘What’s It Wednesday?’ feature.

We add one more visual clue into the mix for readers who link directly to our e-zine and need a little help in the ID department, plus we link to the second clue later in the day on Wednesday via our email newsletter subscribers and social media.

A recent ‘What’s It Wednesday?’ car puzzle was a 1955 Mercury Montclair convertible and it garnered plenty of attention (and plenty of correct answers) because this stylish Merc is a rare but popular ride in the car hobby.

We at MyStarCollectorCar are also big fans of the 1955 Mercury because it embodied so much of the flashy style of the Fabulous Fifties automotive decade. 1955 was a pivotal year for the domestic car market because it marked the start of substantial style changes in the Big Three (GM, Ford and Chrysler) lineup and the ’55 Mercury was a part of the transition.

The pre-55 style was a bridge between the post war look and the late 1940s when car manufacturers were able to concentrate completely on civilian vehicles, so they invested in new equipment directly related to automobile production.

The then-new body style produced in the late 1940s and early 1950s offered curvier and lower rides than most 1946-48 versions, but they became dated by the mid-1950s when Detroit headed in a new style direction with their 1955 models.

The 1955 Mercury was no exception to this trend because it was rooted in the new era of tail fins, generous horsepower and even more generous applications of chrome to the vehicles-particularly the upper end Montclair models.

The 1955 Mercury offered a 292 cubic inch OHV (overhead valve and not a flathead valve) V-8 engine that came in two versions: a tamer 185 horsepower version on the lower end Custom and Monterey models or a stronger 195 horsepower version that was also an option on these two cheaper Mercury models.

The higher horsepower 292 engine was a throw-in when the customer bought the Merc-o-matic automatic transmission for his high-end Montclair, but the beefier V-8 was an option when he bought the other two less expensive models.

The 1955 Mercury also followed the typical automotive caste system from that era because it was given more bling as it moved up the ladder in the lineup.

A ‘55 Mercury had a very basic chrome package when customers ordered a Custom, Monterey or Monarch (Canadian) model-but things got a lot shinier when they bought a Montclair edition. The Montclair even had chrome rocker panel covers to give it more glitz on the road. Car builders wanted to illustrate the stark difference between a cheapo model and a more expensive model, so they added more bright work to indicate the size of the purchase.

A subtle difference between the upper end Montclair and the lesser ’55 Merc models was the car height because the Montclair was almost 3 inches lower than either of the other two choices.

In our opinion, the 1955 Mercury was one of the coolest things to come out of the Fifties because of its very stylish appearance. These cars are a rare addition to 21st century roads and should be treated like rock stars by anyone who is fortunate enough to see one.