One night some misfits decided to steal the back wheels off the ‘stang.

The next night these ambitious lowlifes decided to grab 4 more wheels including the replacements for the stolen back wheels.

That’s when Stan Purcell’s dad jumped into the fray.

He worked in the body shop at the dealership and he convinced them that the car was worth 800 bucks. They bucked at that price but Stan’s dad worked them over like a UN peace negotiator and the deal was done. He pointed out the obvious-800 dollars would barely cover the new wheels. 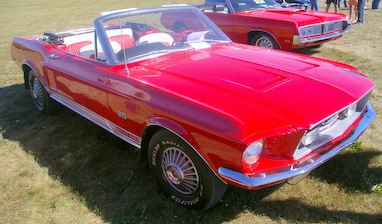 Who said crime doesn’t pay? They took his offer.

Stan’s dad drove it out to the family farm and gave it to his high-school aged son. He drove it for several years before moving on to a non-Mustang convertible life.

After that the classic pony car was banished to a grain bin for 8 years where its exterior took a big hit in the rust department.

Enter Stan. He always loved his brother’s car plus he’s a diehard Mustang guy. This car had been a big part of the family for years. Who was he to let the product of his dad’s hardcore bargaining rust away in a barn? Stan didn’t. He took on the project. 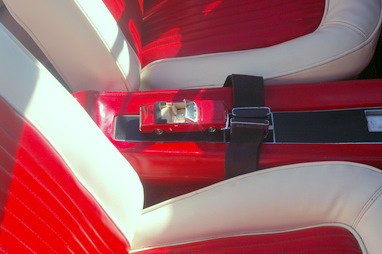 Stan is a highly talented guy so the Mustang was saved in a big way-this is a show stopping red, numbers-matching 302, 1968 Mustang convertible.

You could call this 60’s classic pony car a barn find and say that Stan was lucky but he really wasn’t.

He knew where the barn was.

We have many, many more car stories-including more