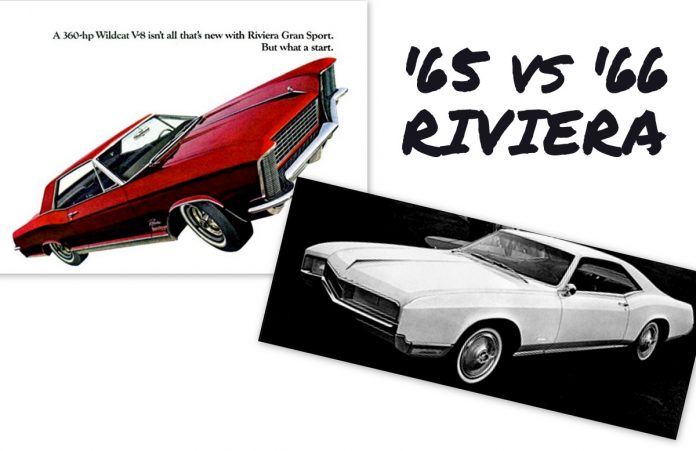 Full disclosure: MyStarCollectorCar is a huge fan of the 1963 to ’66 Buick Riviera, but that barely interesting factoid did not stop us from asking the title’s burning question.

The 1965 Buick Riviera still bore the distinctive style that began in 1963, but with one important difference because the ’65 Riviera had stacked vertical headlights that were also hidden from view in the front grille. The 1960s domestic car movement toward hidden headlights picked up plenty of steam by the end of that tumultuous decade, but it was a relatively new concept (give or take the legendary ’63 Corvette Stingray) in 1965.

The decision to conceal the 1965 Buick Riviera’s new vertical headlights behind stylish shields was an excellent move in our opinion here at MyStarCollectorCar. It enhanced the overall style of the Riviera, but the car’s basic design was three years old by the 1966 model year, a situation that rendered the 1963-65 Riviera style obsolete by ’66.

The result was the 1966 Buick Rivera, a car that bore little resemblance to its predecessor. The ’66 Rivera was built during the back nine of the 1960s, a decade made famous for its dedication to planned obsolescence in terms of automotive design and style. Yesterday’s cars were yesterday’s news in Detroit, so a complete makeover was the order of the day for the Buick Riviera.

The 1966 Riviera also had hideaway headlights, but the lights were returned to their horizontal position on the car’s front grille and made the ’65 Riviera into an instant outlier when it is compared to the 1963-64 (and the ’66 Riv) in this headlight position feature.

The ’66 Riv also featured a longer and larger C-pillar (rear pillar) that swept over the back end of the car in more striking fashion than a 1965 Riviera. It was the dawn of the fastback era for the Riviera and the extended C-pillar design suited the overall style of the ’66 Riv in a big way.

The ’66 Buick Riviera was slightly larger than its 1965 predecessor because General Motors wanted to meld full-sized luxury with a sporty look that would capture the attention of potential higher end buyers who wanted comfort and style in one package. The kind of customer whose carefree lifestyle meant they could walk right by a Buick station wagon to look at a Riv in the same showroom.

The General even added extra muscle into the Buick Riviera equation in 1966 with its beefier 425 engine that corralled more ponies under its hood than a ’65 Riv. The sleeker design of the ’66 Buick Riviera was purpose-driven and created to make the car look faster than a 1965 version.