Car guys are familiar with the hands-on approach to a project and Stars in Rehab chronicles this philosophy.

The basic premise is simple-resurrect old iron. In most cases this is done on a budget but like any project, the budget can get blown out of the water.

In every case the vehicle represents something personal so the time and money becomes insignificant when measured against the reward.

Keith Dolphin took on a rare project in the form of a 1973 GMC Sprint and the best way to explain this sequence of events is to use Keith’s own words. 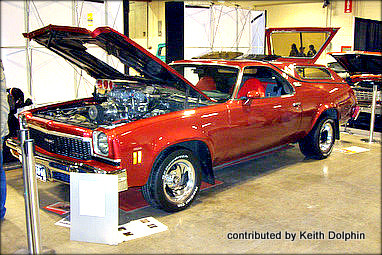 Every story has a beginning and typically there’s a “boy meets car” start to the narrative-this was no exception as Keith explained.

“The first time I ever saw a 1973 GMC Sprint, it was parked outside my house. I really liked the car right from first sight. The year was 1986. I soon found out the owner was a family friend and it was for sale. The price was right ($1,500.00), so I got a loan to start many years of spending money on it”.

The story begins on a high note, then reality set in.

“It was bright white when I bought it. 6 months later, the bad bodywork done on it was already starting to show. They used a coat hanger to hold the large amounts of body filler around the rear wheel wells. I didn’t like the look of that, so soon after I got part panels welded in and painted the car silver/grey”.

Modifications become part of the personal signature on a project.

The car came to me with steering column shifting. I hunted down a center console and installed a floor shifter. The bucket seats were looking old and ripped so I had the covered with grey material to match the car. I like loud music but the car had not much room for any amps or speakers. I got the idea to take out the back window and cut the back wall out to install amps and speakers in the back.

The back deck had a metal piece bolted in against the back wall. I pulled it up and underneath, the deck was lowered and there was seat belt mounting nuts welded there. Soon after I found seat belts and a back seat at the wreckers and installed them. I built a large bass box that holds 2 – 10″ and 1 – 12″ woofers. It was the same height as the back seat and helped hold the seat from going back too far.

Slowly over time I started to buy chrome and updated parts for the motor.I knew I wanted to keep this car forever so I started to buy parts with lifetime warranty. My best buy was a lifetime battery from Canadian Tire.”

Eventually there is a turning point in every old ride and Keith discovered his on the GMC.

“Years went by with the car starting to show rust around the windshield and other various places. It was time to get the car fixed the right way (ground up). I found a guy just outside town that did good bodywork. He said he couldn’t give me a price until he ripped the car apart to see all the bad stuff. Per hour work started and before too long, I had spent thousands of dollars to have the car stripped down to just the frame and the motor. He called me out to see the car and give me a finishing price. He told me he wanted $12,000.00 to finish it up”.

Married guys can relate to this part

“I remember feeling sick and drove home in a daze. My wife asked me how much it was going to be to finish it. I told her I needed to lie down and she should do the same before I tell her. I felt sick the rest of the day.

Projects this extensive take far longer than anticipated as Keith explained, “The bodywork took a long time to complete as it turns out, I should have started with a car with less rust. The only original parts used are the tranny tunnel, doors, dash and front fenders. The rest came from a 1976 donor car”.

Since I used the roof from this car, I now had retractable shoulder harness belts. When all was said and done, my car was better than new from the ground up.

Repercussions naturally follow- particulary with married guys...”A few years went by and my wife decided it would be best if I was single”.

Keith was undaunted so he carried on through the ozone layer with this project as he recalled, “Right after that, I went on a spending spree. I found a 427 motor and had it built to match up with a 671 blower. Between the motor, blower and all the extras needed to hook up a motor like this, I soon hit the $22,000.00 mark. You don’t know the feeling of driving a 600 hp car until you do it. I installed the 427 myself. I bought a new turbo 400 tranny and bolted a Gear Vendors overdrive on it. I then installed a Moser Engineering Ford 9″ powder coated rear end. When the bodywork was in progress, the rear wheel wells were stretched out by 2″ to fit 295/50 series tires.

Car projects are eternal-this 1973 GMC Sprint is no exception as Keith conceded, “To tell all about this car, the article would be the length of a phone book so I condensed it as much as I could. I am upgrading the stereo system right now. I have 5 amps and 15 speakers. I love this car and don’t ever want to get rid of it.

Here’s a link to Keith’s big block in action-http://www.youtube.com/watch?v=x5ODBSkkahw&feature=youtu.be 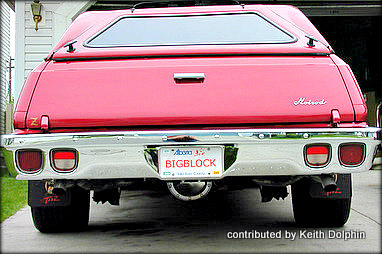 THE PLYMOUTH FORMERLY KNOWN AS VALIANT