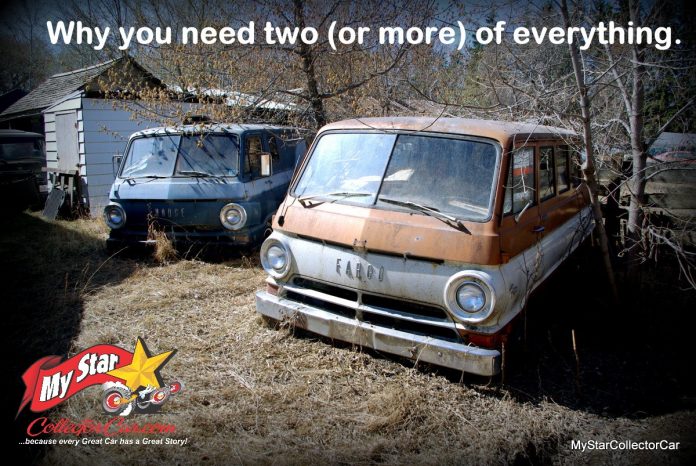 There was a recent auction where a TV car guy sold off his collection of cars because he was getting out of the business–so there was a lot of buzz in the old car world.

Nevertheless, he did have a few vehicles that had solid project potential–mostly because he had at least three or four examples of the same vehicle. Better yet–those extra parts cars are probably the biggest asset you can have in a major project.

He was clearly a big 1st Generation Barracuda guy because he had at least four of them in the auction. They ranged from running to massively scavenged for parts, but I would have bought them all if I was in project mode. The worst example didn’t have a front clip or rear glass, but what it did have was all the things you don’t think about until you need them.

Cars are the sum of thousands of parts–you don’t find that out until you’re looking for a specific clip for a front window mechanism or a back seat rail specific to the 1964-1966 Barracuda. For example, that worst case scenario Barracuda parts car may have a mint water bag–so you don’t have to pay some guy the equivalent of a down payment on a brand-new truck. Or it might cough up a trim piece you’ll never find on the open market.

The other thing the extra cars provide is a blueprint for how to put it back together. You can watch all the YouTube videos you want but there’s no replacement for having a complete, non-dissected car next to your project. It takes all the guessing out of the equation–especially if you and your buddies were eight to ten beers in when you tore it apart.

The seller also had five Sunbeam Alpines for sale at the auction. These cars are the definition of a niche market, but the guys who love them are hardcore, They’re so hardcore if it comes down to keeping their cars or their wives–bet big money on a divorce court battle.

The Alpines were just like the Barracudas–they ranged from decent shape to skeleton parts cars. I’m not an expert by any means on the Sunbeam Alpine, but I know rust plagued them from Day 1. Some of these cars looked like you could get them back on the road, while others were five minutes away from a visit with Dr. Shredder.

There were five of them, but optimistic car guy math tells me you probably had two potential Sunbeam Alpines out the five. That’s not a bad thing because a smart guy would buy them all, build two and completely dismantle the other three. Then you put all those rare Alpine parts on the open market with obscenely high prices–with any luck you’re going to take a big bite out of your in costs for the five Alpines.

Should you buy several of the same cars at an auction? Absolutely–all you need are two things.

Five to ten acres and a very understanding bride.