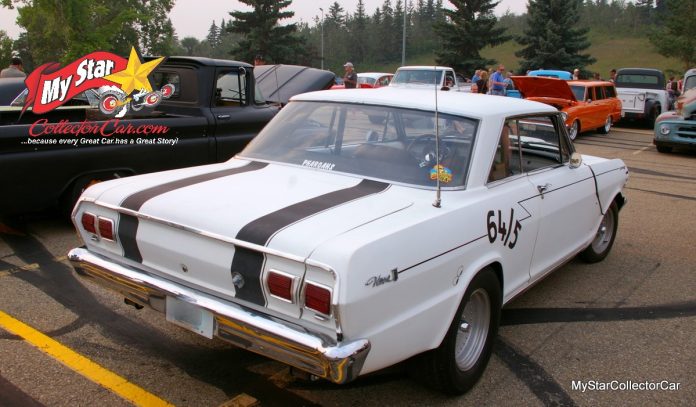 Steve Turner always liked the style of the first-generation Chevy II compact and was interested enough to buy a former track car version.

The first-gen Chevy II was easy on gas and light on horsepower in its base 4-cylinder version, but the little car had plenty of potential in race form because of its size and weight.

Consequently, the former owner of Steve’s car took the mild-mannered little Chevy II and transformed it into a raging beast that only competed on the drag strip before Steve became its current owner.

The car was a rolling chassis (essentially a shell in Steve’s words) that no longer had a power train in it, so Steve decided to build it back into a street-legal car with all the necessary equipment to pass a mechanical inspection to register it for the road-with enough muscle under its hood to honor its racing past.

For Steve, the solution came in the form of a beefed-up Chevy 350 small block that was couple to a 4-speed manual transmission. The Chevy II’s previous engine had a collection of air intake stacks that required a hole in the hood so they could gulp down more fresh air, but Steve did not need the same configuration for his street machine. Instead, he uses a rear-facing hood scoop that pushed air toward the reverse air scoop on the Chevy II engine.

He was able to fit his 350 under the hood and filled in the hole on it. However, Steve consulted with builder Stan Purcell who created a race-style configuration on the hood/front clip combo (donated by a ’64 Chevy II) that opens backwards and is held in place by two sturdy race clips.

The interior of the car was gutted for racing purposes, but Steve was able to recreate the factory look inside his Chevy II-except for the roll bar. The overall result was a car that honors its racing heritage with the unique front clip and roll bar but is now a street machine under Steve’s watch.

Steve preserved his Chevy II’s race past with a few other features on the car, including its trunk-mounted battery that was re-positioned by its former owner for race purposes. The car still has its race safety switch that is manually operated on the rear of the Chevy II.

The front end of the car has modified shock towers that were lowered so they would not hit the underside of the hood, as well as additional support to prevent stress on the front end. Steve used a rear drum/front disc brake system to slow the car down on the road.

He also modified the rear light system and replaced the backup lights with another set of taillights for added visibility and coolness. The new smaller LED backup lights are now located to a position under the taillights.

Plenty of thought went into the Chevy II’s four-year rebuild process and it is now a legal street machine with plenty of race heritage still left in the mix.