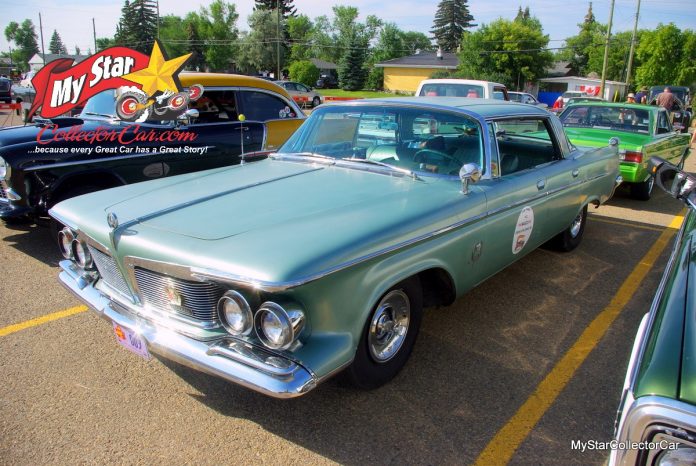 The 2022 Coasters Tour had some interesting vehicles on their giant cross-Canada road trip, but only one was a backup plan.

The Imperial was in hibernation when Fraser pulled it out for the run. The previous owner was an elderly man who the Fields met through their volunteer work. The car was in one of his buildings and it had been in the man’s family since the 1970s.

Fraser became the next owner of the Imperial—he believes he’s the third one. This is a 134,000 original mile car and it was well-maintained over its 60 years.

The Fields are the organizers of the last several Coasters Tours, so they wanted to make sure this Imperial was reliable because he was also towing a 1973 Airstream. Fraser added a transmission cooler to help the big Impy stay cooler under the challenge of the extra weight.

Fraser also added extra springs and air bags to handle the trailer. He changed all the hoses and added waterless coolant to the rebuilt radiator. Fraser said the Imperial “has a huge rad—it never gets hot and all it needed was a flushing” so his car has massive cooling power. It worked perfectly through the road trip across Canada. Fraser said the only issue was today’s fuel, “It’s full of ethanol, so it evaporates out of the carb when the Imperial’s 413 sits in hot weather”.

The Imperial handled the load without any major failures, but Fraser did need to do a little roadside transmission work, so he enlisted the aid of some fellow Coasters. The rule of thumb on the road trip is never leave a Coaster stranded.

Fraser had the car mapped out for most efficiency on the road trip. He ran the Imperial at a speed just under where the four-barrel kicked in for better mileage. He said the Imperial had a highway gear, so it took time to get it up to speed with the Airstream trailer on back.

The trip has been a triumph for Fraser, because even though he’s been on these runs since 2000 it never gets old. He loves the road less traveled, so the Coast to Coasters hit smaller communities on their journey.

The hospitality was great across the country. Fraser was particularly impressed with the reception in Stettler, Alberta thanks to the local community and the Ponoka Piston Poppers Car Club.

The Frasers travel with a life-sized decal of Queen EIizabeth II in the driver’s side rear window and that gets a lot of attention—particularly in Newfoundland where the Royal Family are revered. If the sight of a giant car called an Imperial isn’t enough, Liz drives home the royal factor.

They took their granddaughter on the trip and the size of the trunk blew her away—she said it was “bigger than her dad’s whole car”. Fraser admitted back home he uses it around his acreage—that’s how he knows the trunk can haul “three yards of gravel”.

There’s a point to be made on these Coasters runs and Fraser summed it up best.