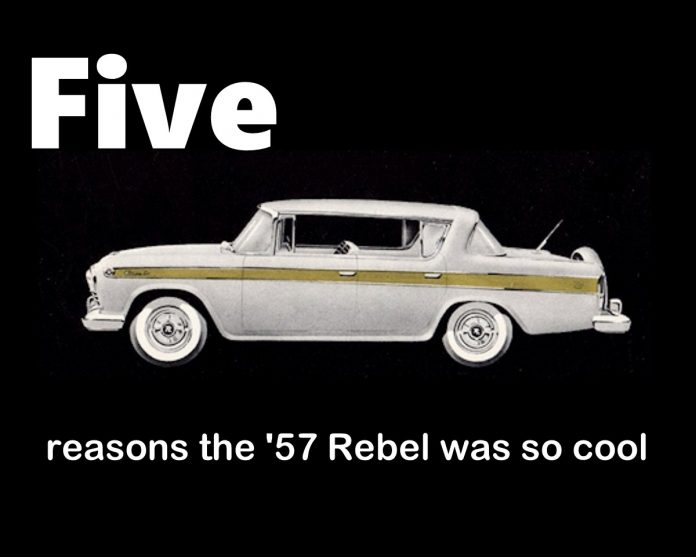 Rambler and cool are words not typically found in close association, mainly because parent company American Motors built cars that answered the bell in terms of practical (but not pretty) transportation during the 1950s.

One could argue that 1950s-era Ramblers offered dependability in vehicles that looked like they were built in a Soviet bloc country.

However, we at MyStarCollectorCar believe the 1957 Rambler Rebel should be included on a list of cool cars and we are prepared to provide five reasons why this unlikely sedan deserves consideration for the list.

The first reason is the 1957 Rambler Rebel has an oddball in-your-face body design with modest rear tail fins during an era when finned cars were king of the road. The Rebel’s style message suggested the car’s designers recognized the tail fin craze in the late 1950s but did not want to build a car with a follow-the-leader style and instead chose a style that blazed its own path in the domestic vehicle market.

The second reason is the ’57 Rebel also had modest fins on the front fenders. It was a unique design choice that suggested the car’s creators wanted to cut their own swath in terms of style. Mission accomplished in our opinion here at MyStarCollectorCar because there were no other domestic vehicles that resembled a box with front and rear fins built in 1957.

The third reason is the car’s name. The 1957 Rambler Rebel was a standalone model that pushed the AMC brand during a difficult financial period in the struggling car-builder’s history. The ’57 Rebel was the company’s declaration that it was not ready for the corporate scrap heap and wanted to build a feisty car to fortify AMC’s position as a financially healthy car builder.

The fourth reason is the 1957 Rambler Rebel was only built as a four-door hardtop model. The two extra doors were a necessary part of the build, given the fact American Motors did not have enough cash to manufacture a two-door version, so AMC decided to showcase the Rebel as a four-door model that was only offered in one paint scheme: Rebel Silver, a signature color that made the car even more unique in our opinion here at MyStarCollectorCar.

The fifth and final reason for elevating the 1957 Rambler Rebel to cool status? It was a highly unlikely road rocket that was an early pioneer in the muscle car movement that caught fire in the 1960s.

AMC installed a lively 327 cubic inch small block into the Rebel. The car’s lightweight and the 327’s power gave the car the best 0-60 times of any domestic car built in 1957, including the legendary Chrysler 300 C and the Studebaker Golden Hawk.

AMC fortified the suspension and unibody frame components on the 1957 Rebel, so it was more than ready to tangle with Detroit’s finest on the road.