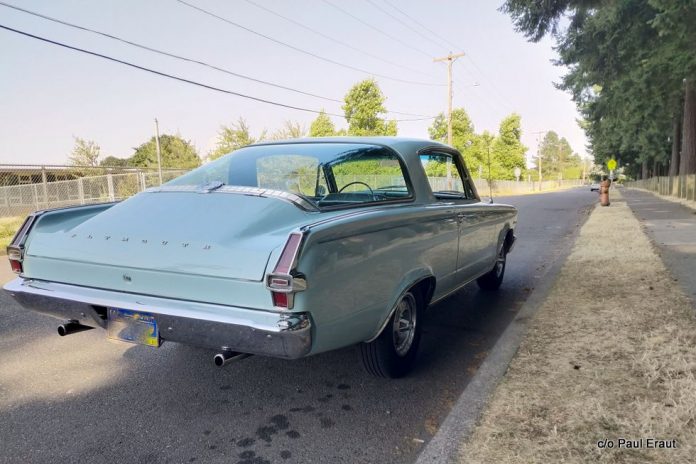 Paul Eraut is only the second owner of a 1966 Plymouth Barracuda because this pony car has been in his family since the day his mother bought the Barracuda as a dealer demo in 1967.

Paul said he grew up with the car and was more than willing to purchase the Barracuda from his parents in 2015.

Paul’s father became the unofficial custodian of the Barracuda over the years and repainted the car twice during his involvement. The Barracuda spent most of its time in California before a move to Washington state with his parents. Paul became its current owner because “it was just sitting there” in his words and needed some attention.

The Barracuda still has its original 273 cubic inch small block and three- speed Torqueflite automatic transmission, but the engine has undergone some changes over the past several years. It was originally a two-barrel engine and now sports a lively four-barrel carb setup.

The 273 has also been bored 30 over and the valve train lifters are now hydraulic to add to its efficiency.

Paul picked up the Barracuda from his parents’ place about five hours away from his home and decided to drive the Barracuda back to his place. “It (the Barracuda) worked fine” during the trip, according to Paul.

The trip was also a shakedown inspection for Paul because he was able to assess the Barracuda during the journey. He replaced the rear springs on the Barracuda and his dad upgraded the front shocks to a gas shock system.

Paul also had to replace the tires on the Barracuda after a rear tire blew on the car. A bubble in the tire caused the blowout and Paul knew it was a smart plan to replace all of them.

His blown tire adventure became less dicey because Paul is a smart driver who does not want to push the Barracuda past its limits. “I want to drive it-not beat it up”, in Paul’s words.

He likes his car because of its long family history, but Paul also likes the design of the ’66 Barracuda. He calls the distinctive and large rear window a “greenhouse” because of its massive glass size. Paul realizes his Barracuda has a very unusual style and “you either love it or hate it”, according to him.

The family legacy with the Barracuda now extends down to Paul’s daughter because he wanted to give her driving lessons in a classic car from a bygone era.

Paul is a big fan of the ’66 Barracuda’s simplicity and loves the fact his car embodies the Kiss (“Keep it simple Stupid”) Principle.

His 1966 Plymouth Barracuda has no power steering, no power brakes and, most importantly to Paul, no onboard computers to complicate matters for its drivers.

The driving experience with the Barracuda is different and more enjoyable for Paul. He has a 2010 Toyota that serves as his daily driver, but it’s very clear that Paul’s clear favorite is his 1966 Plymouth Barracuda.

His classic Mopar pony car is a trip down memory lane for him every time he gets behind the wheel.