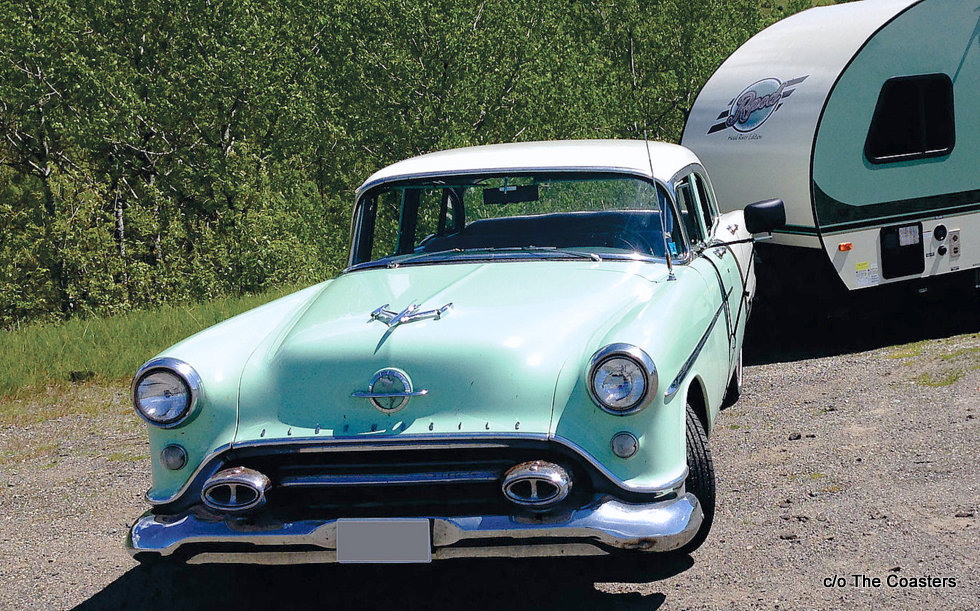 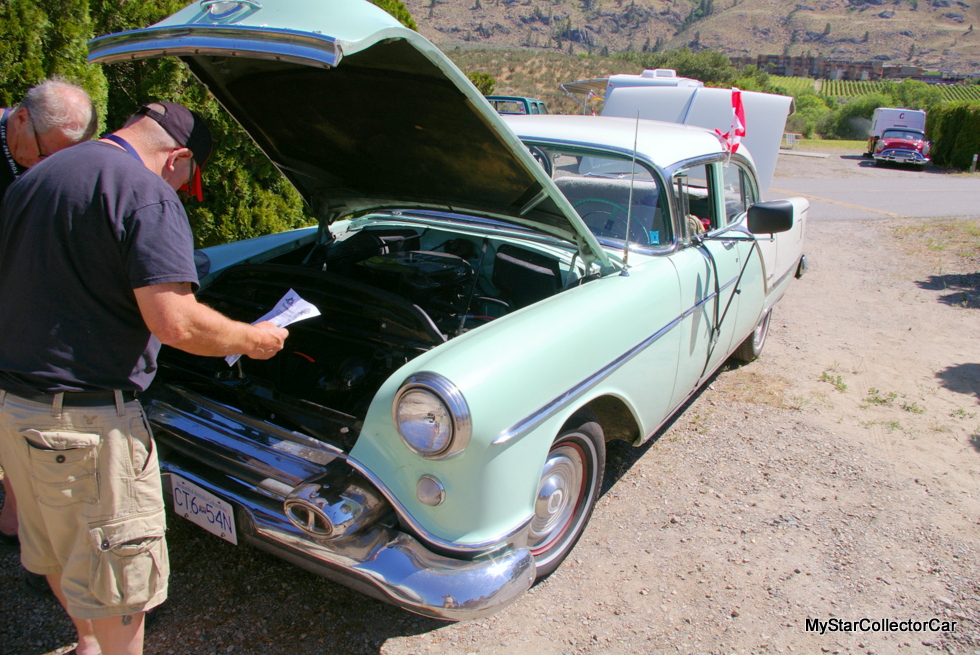 Two car guys were under the hood of a 1954 Olds 98 sedan and they were tinkering with the very original 63-year-old car.

Cars of this vintage are usually morphed into something radically different by their owners but this ’54 Olds was a pretty stock version of the one that left the factory all those decades ago.

The two men were about to install an electric fan on the Olds so the 63-year-old car would keep its cool as a trailer-hauler. 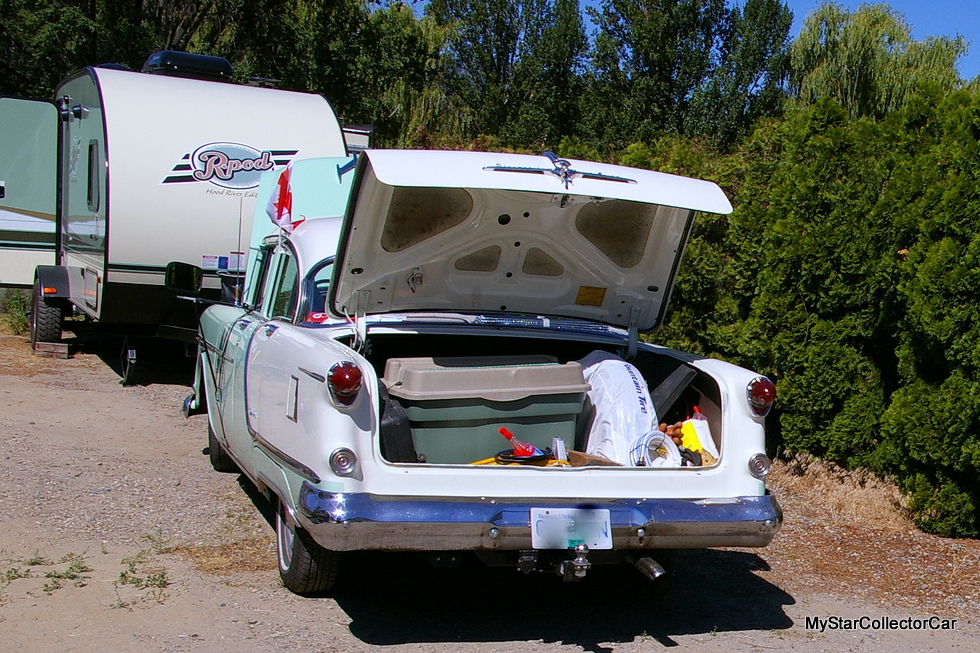 The 98’s owner was Mike Sawka and he was in the early stages of a cross- country tour with the Coast to Coasters, a group of largely Canadian automotive adventurers who were willing to see the entire country of Canada in a vintage ride. 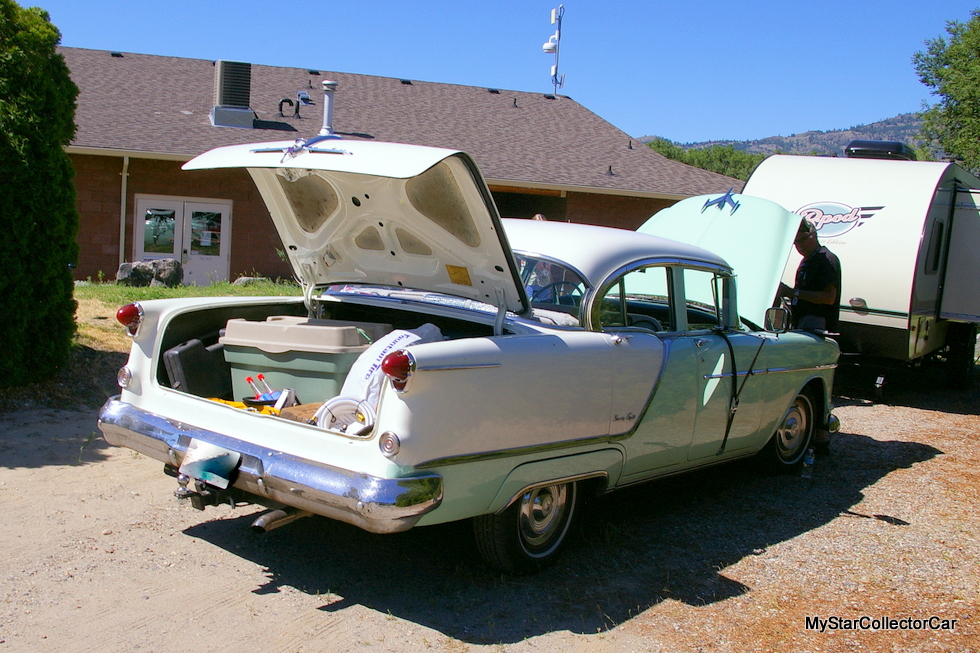 Some of the vehicles were heavily modified and some of the owners were not pulling a trailer, but Mike and his Olds were old school and also pulled a trailer for accommodation along the route. The trailer was a lightweight R-Pod unit that was designed for its ease of towing but a 1954 Olds 98 is still not blessed with 21st century technology, so Mike decided to add electric fans to cool the original OHV V-8 engine. 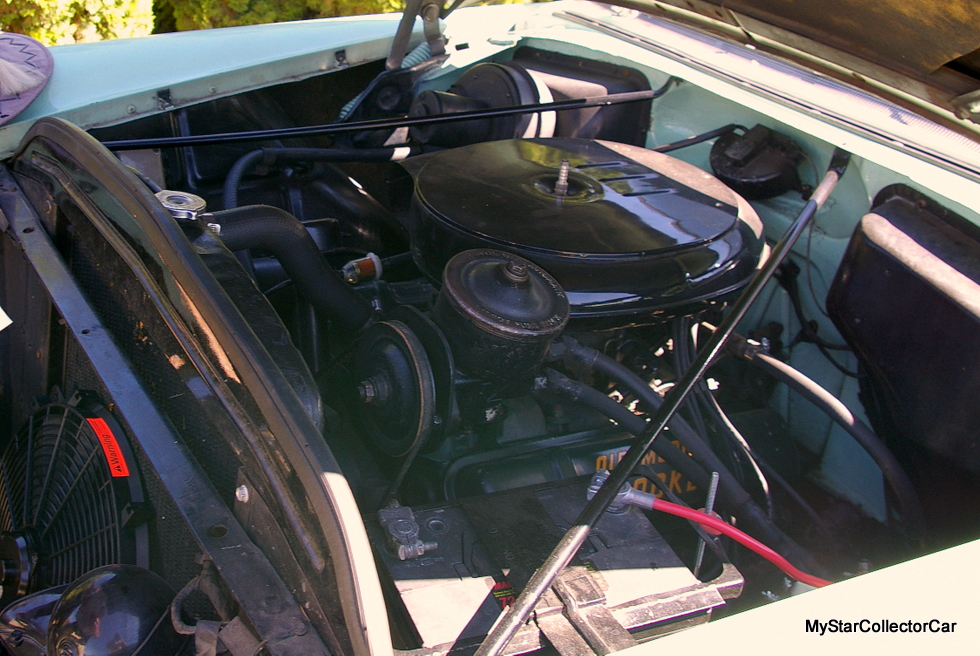 The Olds also had a factory 12-volt system that made the installation of the electric fans easier for Mike and his friend. The car had already experienced an overheating issue twice-before and Mike did not want to go through the hot adventure again if he could avoid it. 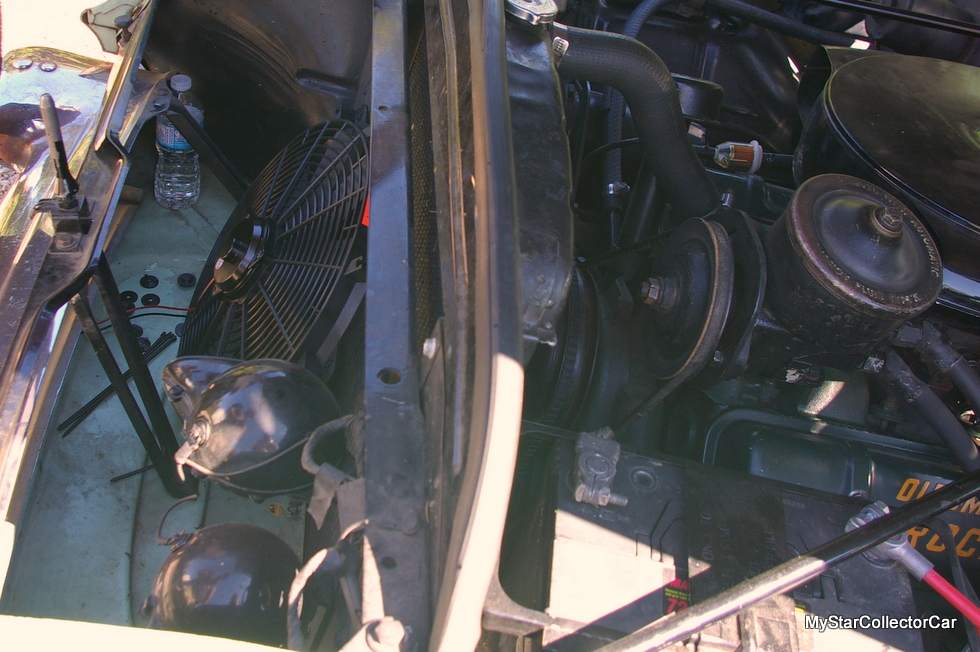 The trailer is reputed to be one of the lightest on the market, but that was before it got stocked by Mike’s bride, according to Mike. She is a woman who wanted to be well-prepared for the long cross-country trek in their Olds 98. 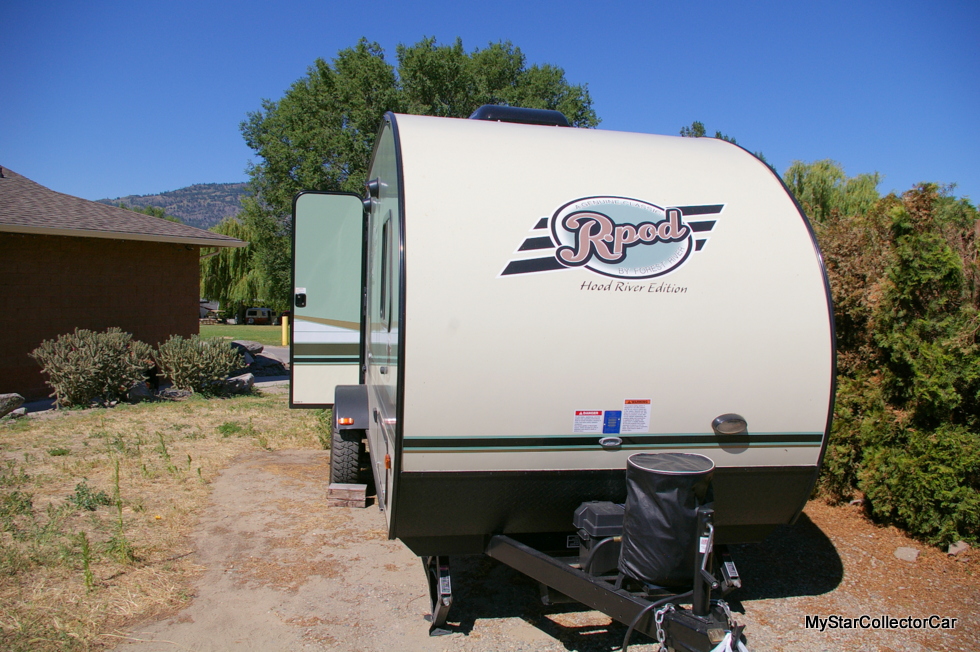 The Olds is “not bad” on the road, according to Mike, and the car will cruise at a steady 55-60 mph (95-100 km/h) with the trailer on behind the car. Mike said he can go faster, but he chooses slower “just to preserve my sanity”, in Mike’s words. 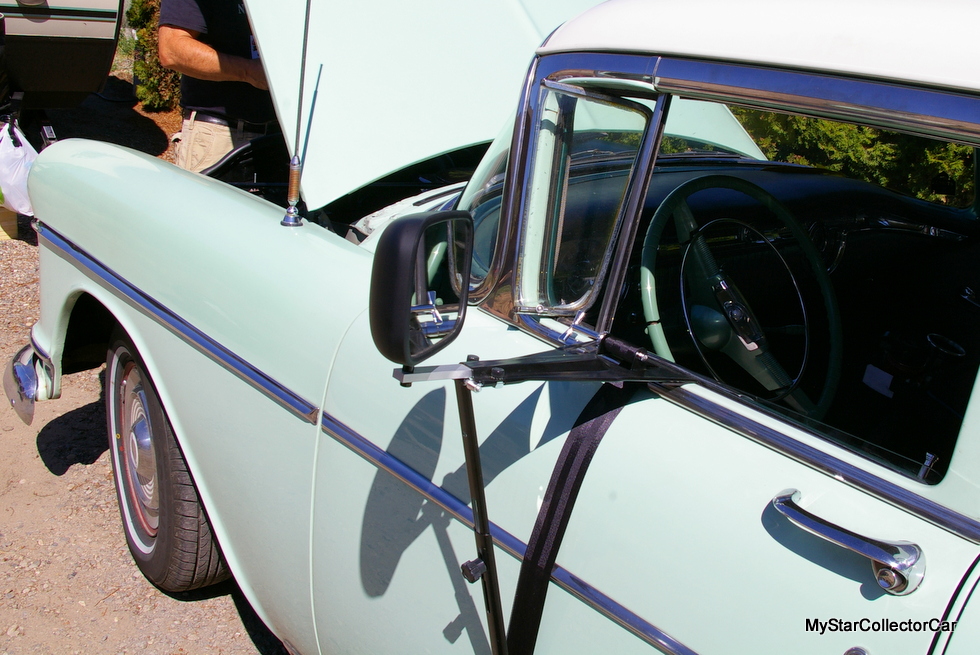 The electric brakes on the trailer help preserve the stock drum brake system on the Olds for Mike.

1954 was not a year for lavish automotive features but Mike’s Olds 98 was a top-of-the-line automobile, so it has power steering and a four-speed Hydramatic automatic transmission that allows drivers to hold the car in third gear until it builds enough momentum to shift into the last gear. 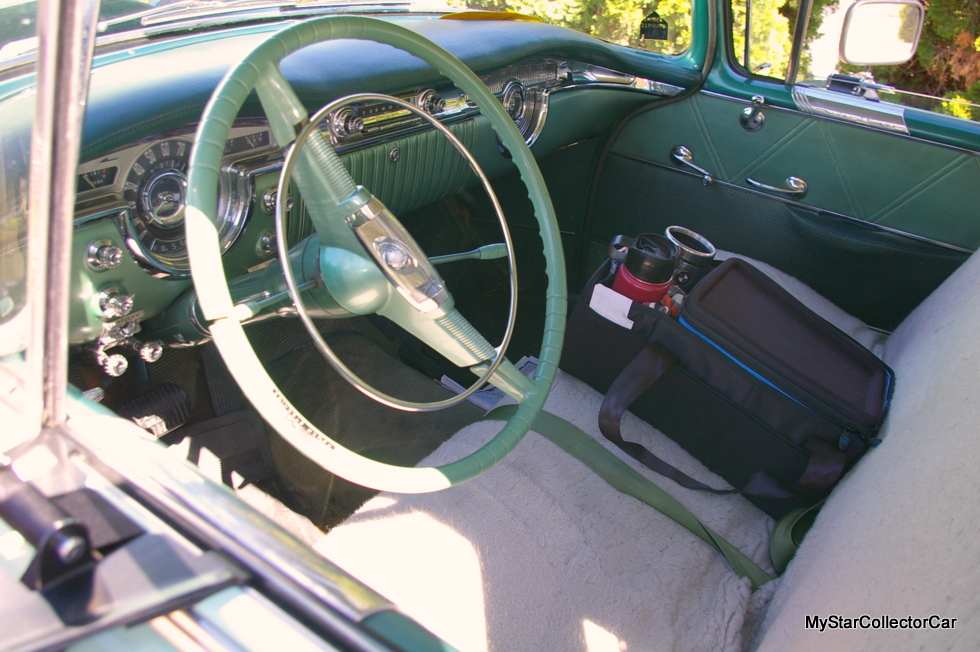 The sophisticated tranny and the 324 cubic inch Rocket engine gives Mike some extra jump when it comes to towing a trailer.

The toughest part of the long journey occurred early in the Coast to Coast trek because the adventurers faced desert-like heat and steep hills in southern BC’s Okanagan region. Mike was smart when he gave he and his wife a fighting chance to tackle the steep and winding pass out of Osoyoos with his minor alteration to the cooling system on his stock 1954 Olds 98.

Mike must have been a Boy Scout in his younger years because he was prepared for the long trip-even while he was on it.

IT MAY BE THE 21ST CENTURY BUT YOU CAN STILL GO...