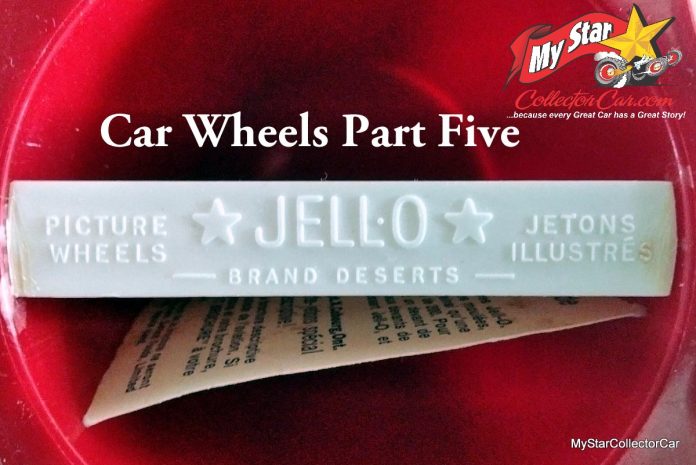 By now our MyStarCollectorCar readers are aware of our Jell-O Car Wheels series that was based upon their 1961 pudding promotion for car kids who also liked their product.

Most people already know the 1930s was also known as the Great Depression because of the huge nosedive in the world’s economy, a fact that was painfully obvious in North America.

Surprisingly, the Jell-O Car Wheels collection included several high-end cars in the pudding mix, including the 1930 Pierce-Arrow. The Pierce-Arrow cost between 2875 and 8025 dollars, according to the Jell-O Fact Book and was well beyond the reach of an unemployed car buyer with no possibility of a job, so it was unable to survive the 1930s before it crashed and burned as a car company.

The Jell-O fact book indicated many Pierce-Arrows ended up as tow trucks when their value fell off a cliff during a very rough economic era like the aptly named Dirty Thirties.

The 1931 Oakland-8 was a low cost and dependable car built during an era when financial instability reigned supreme. The Oakland 8 had a V-8 engine and a very low sticker price of roughly 750 bucks, so it was an affordable choice for customers on a very rigid bucket.

Jell-O listed the ’31 Oakland 8 in their Car Wheels 200 and MyStarCollectorCar chose to showcase the car on our list. However, the Oakland name would not survive the year and became the car model known as Pontiac in the GM game plan.

Another affordable Great Depression-era car was the famous 1931 Ford Model A, the car that replaced the Model T in the Ford family of cars. A new ‘31 Model A could be purchased for about 500 dollars and understandably was a very hot seller in 1931.

The 1931 Model A represented Henry Ford’s reluctant departure from his beloved Model T, but it was a step forward for his company in terms of style and engineering, including a more rounded body style and four-wheel mechanical brakes. More importantly, it revived Ford’s sales numbers in a big way.

One of the coolest designs offered during the 1930s was Chrysler’s 1934 Airflow, a highly streamlined car for its era and a solid choice for the Jell-O Car Wheels collection.

Chrysler decided to offer its radical style to the buying public, but they were not interested in the car’s unorthodox appearance and the car disappeared from Mopar showrooms in 1937. Beauty was most assuredly in the eye of the beholder when it came to the ’34 Chrysler Airflow and we at MyStarCollectorCar love it.

The final member of our Great Depression Jell-O car lineup is the 1937 Cord, another high-end ride from the “decade without money”, but we chose the ’37 Cord because of its advanced engineering (front wheel drive) and incredible style (electrically operated hideaway headlights).

The Cord company came off the mat and attempted to re-enter the luxury car market in 1936, but the Great Depression still had a death drip on the economy so cars like ‘37 Cords that listed at $4180 were doomed to fail because of a very small cash-heavy customer base .