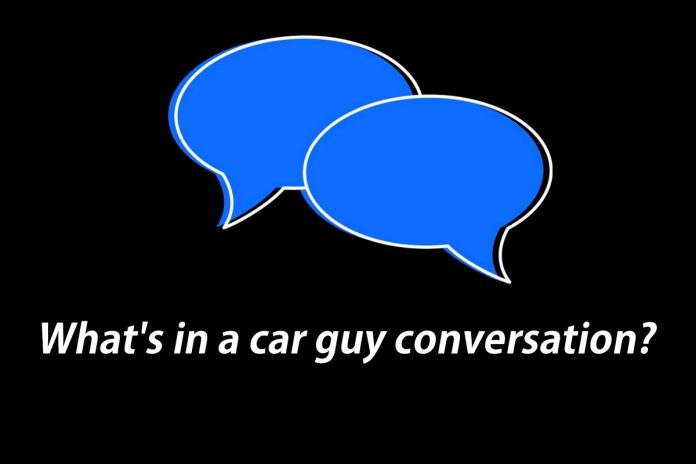 Car guy conversations are similar to conversations you’d hear between plastic surgeons because they’re both focused on a single topic.

You’ll hear them talk about how inferior new parts are compared to NOS (new old stock) parts. Every car guy has a story about how a new voltage regulator blew up after a few miles or a new fuel pump leaked from the day it was installed.

Most of these parts are imported from countries where quality is a concept—not a reality. Car guys have an endless number of war stories about being stuck on the side of the busiest freeway in the world because a crappy water pump failed in their trusty old Studebaker. These conversations are based on painful, marriage-threatening experiences with awful replacement parts.

Car guys also like to talk about smoking car deals. For example, the guy who pulls a mint deuce coupe (‘32 Ford) body out of an old barn will be talked about for years—especially if he paid next to nothing for it.

They admire the guy, but the biggest reason they talk about the deuce coupe guy is simple–he gives them hope that there are other deuce coupes sitting in other barns.

You’ll hear car guys talk about quality of work, because in every case they’ll analyze a car, judge it, and give it a pass or fail based on their own expert opinion.

Bear in mind, ‘expert opinion’ is a moving target. Some car guys are clear winners in their expertise levels while others aren’t—but opinion is a flexible concept–so every car guy gets to insert an opinion.

Other conversations depend on what brand loyalty you have. Car guys like to stay within camps, so Ford guys will hack on Chevy guys because they’re on the wrong team. A conversation about a mint survivor Mustang will always focus on the virtues of the car so you’ll hear things like, “Nice car—too bad it’s not a Chevy”.

This fumbled attempt at diplomacy happens because car guys have to acknowledge the unshakeable concept that every mint survivor car is a wonder of nature. They also want to make it crystal clear (to the Mustang owner) where their team loyalties lie.

The one that got away is another huge topic in car guy conversations.

Car guys may be fresh out of divorce court after a nasty breakup, but that GTO they owned back in high school will take up 90% of their conversation—100% if it was lost in the divorce settlement.

Finally, you’ll always hear about numbers in car guy conversations. Most of these numbers are engine sizes, horsepower, or gear ratios, but there are other numbers that will pop up.

Cost is a big one because there are two roads to travel in the car guy money game.

The most respected number is the low one—the price you paid for a project or completed car. The lower the number the more heroic you are, so if you stole that pristine Road Runner at an auction, you are the apex predator in car guy land.

Oddly enough, the second most respected number in a car guy conversation is a high one, so if you paid 50K for that blueprinted big-block Chevy in your street rod you are also a hero. Nobody said the car hobby was logical.