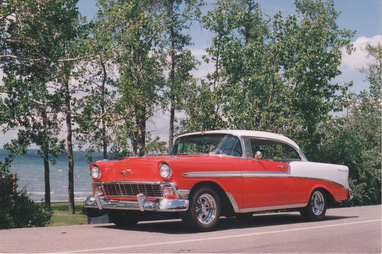 Sure he’d thought about selling his dream and building a new hot rod-in marriage circles they used to call this the “seven year itch”.

The one where guys ditch their 43-year-old wives for a 22-year-old receptionist/bathing suit model.

Happily it didn’t end that way but Dave still didn’t spend the same amount of time with his ’56 Chevy as he had in the past. Something was clearly wrong.

Dave figured it out. The reason that the magic was gone stemmed from the fact that he’d never been truly happy with the restoration of the car. The quarters were put on by a hack and the door fit was never that great. In reality the car needed a total rejuvenation including the well worn interior-the equivalent of Botox injections and silicon to get that new car stance back. 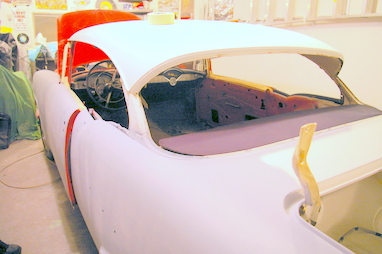 The car went through a very thorough tear down in the fall of 2008 and in an incredibly short time the 56 Chevy was stripped and re-fitted with brand new quarter panels and rockers. It was painted on Easter weekend 2009 and reassembled with a brand new seat covering (2nd time from all the miles) in June 2009. Dave did as much reassembly as he could himself including the tedious job of door and hood fitting and the resurrection was complete by mid-June.

Dave is proudly behind the wheel of the ’56 in 2009, the silver anniversary of the relationship. The fire is back and Dave’s car was the star of a recent show and shine in its first night out. Gone are thoughts of selling it. The family connection to the car is even stronger now because Dave’s sister Gloria passed away in 2000. She had truly enjoyed Dave’s car when it was her wedding car several years earlier.

Dave sees his car as much more than a flashy, desirable, well restored automotive icon-it’s a direct link to a family legacy. He’s going to enjoy this silver anniversary because he’s a real car guy and not just a mercenary in the game.

Dave knows that the blood that went into this 1956 Chevrolet Bel Air 2-door hardtop was more than his own-it was his father’s, brother’s and sister’s and uncle’s-that’s a huge family legacy to honor and this car does that in a profound way. 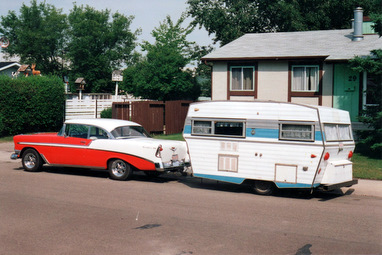 He’s also still having fun-you can’t put a price on that after 25 years.