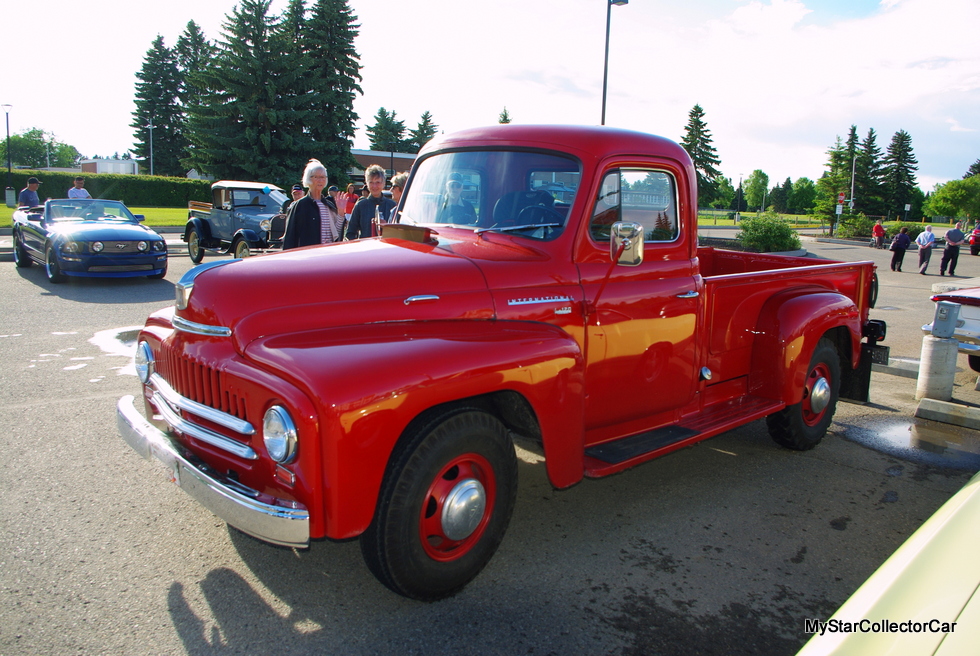 Andre Gagnon is the proud owner of a 1950 International Harvester L-120 ¾ ton pickup truck that is not just any truck because his grandfather Alan was the previous owner.

Alan was a hard-working man who was used to hand-bombing loads of gravel into the bed of trucks for delivery.

Alan was aware of the durability factor when he chose his gravel haulers back in the day and had a long history with the legendary “Corn-binders” (International Harvester trucks) because they answered the bell for his gravel-hauling needs. 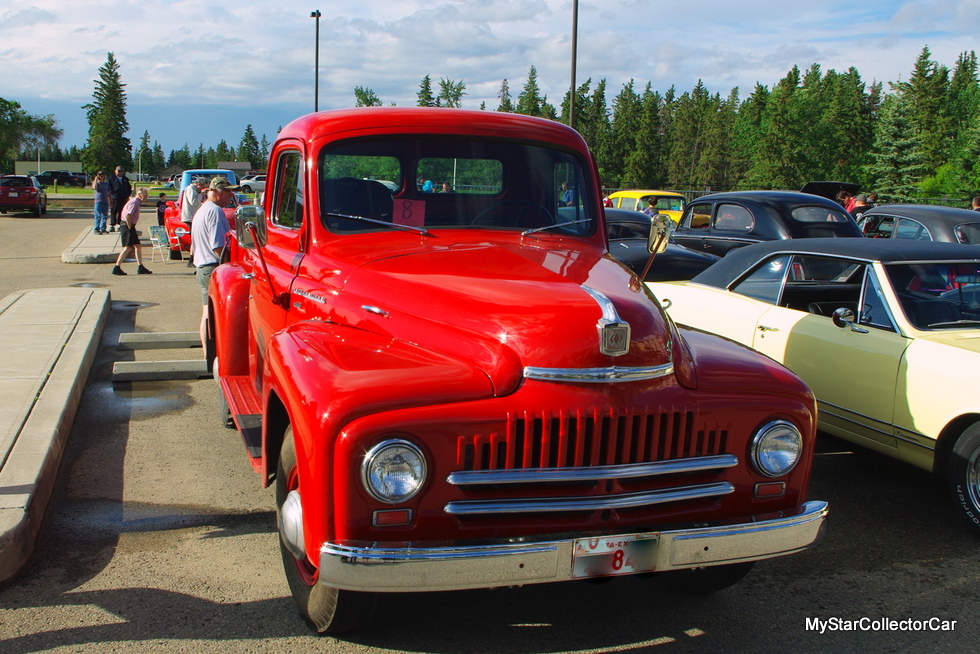 His long history with the IHC brand of trucks was enough incentive for Alan to restore a 1950 International Harvester pickup back to its original roots. The process started with a project “truck of many colors” as described by grandson Andre and took 10 years from start to finish. 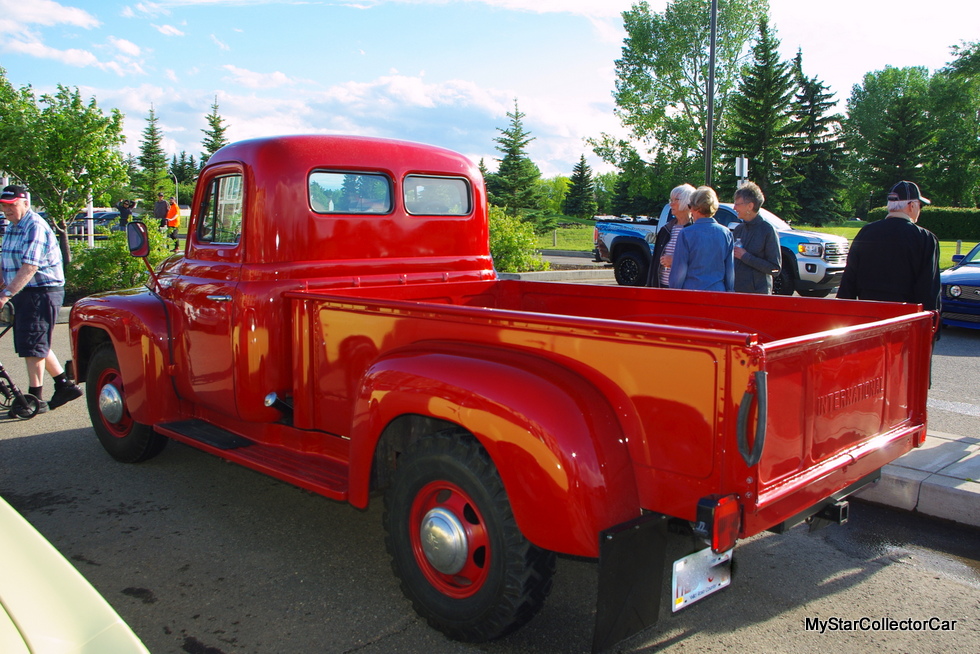 The entire process took longer because there are few IHCs of this vintage left in the world. The trucks were not built in large numbers and were used up by hard work on job sites and farms before they disappeared from the face of the planet in most cases. 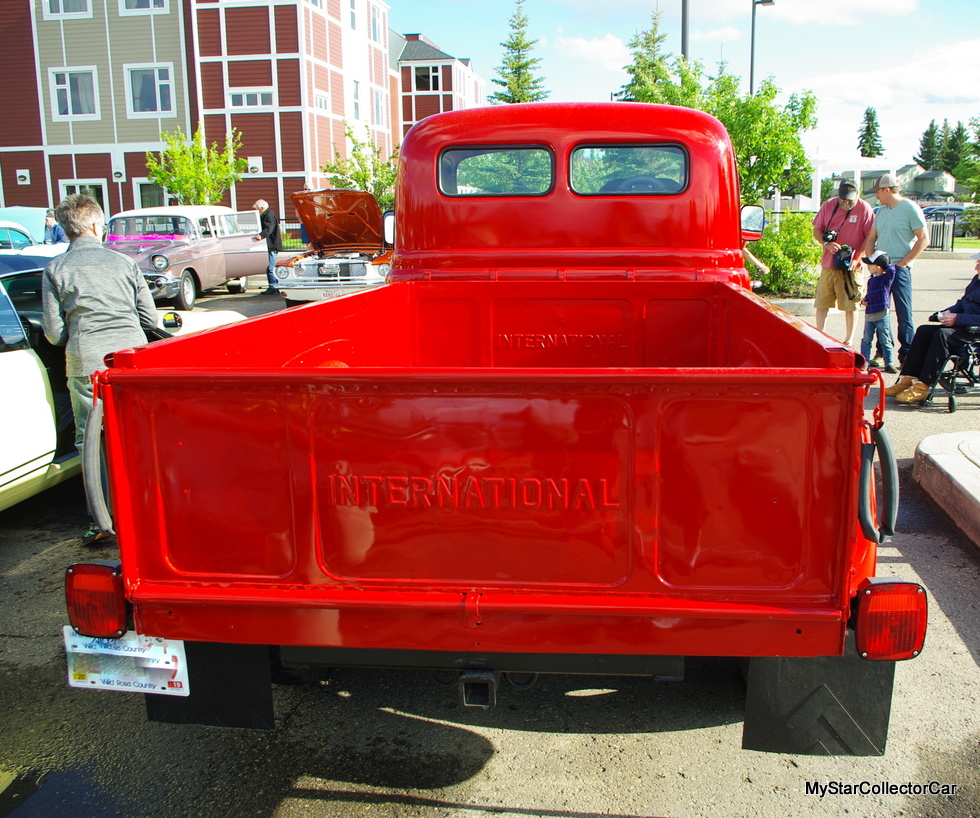 The truck still has its stock 6-cylinder engine mated up to its factory 4-on-the-floor manual transmission. The IHC also has its original 6-volt electrical and vacuum wiper systems because Alan wanted to re-experience the truck in its stock form. 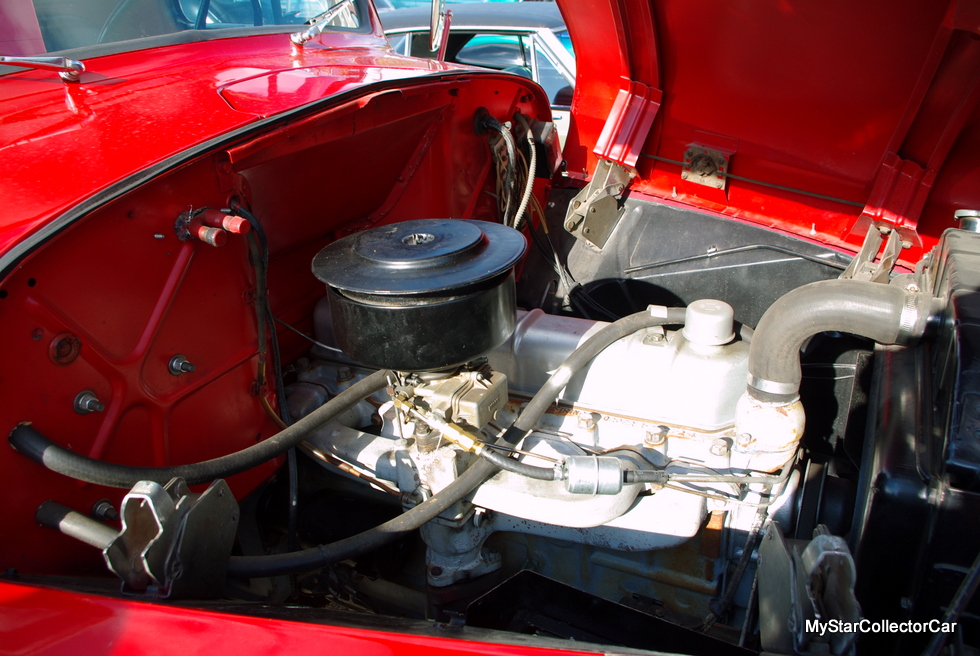 Andre is a licensed mechanic who approached his grandfather with an idea to upgrade the IHC’s powertrain to a V-8 engine. Andre’s suggestion was not on the radar for his grandad because Alan wanted to preserve the original engineering behind the vehicle. All of his past memories with the IHC trucks involved their originality and Alan was unwilling to change that goal. 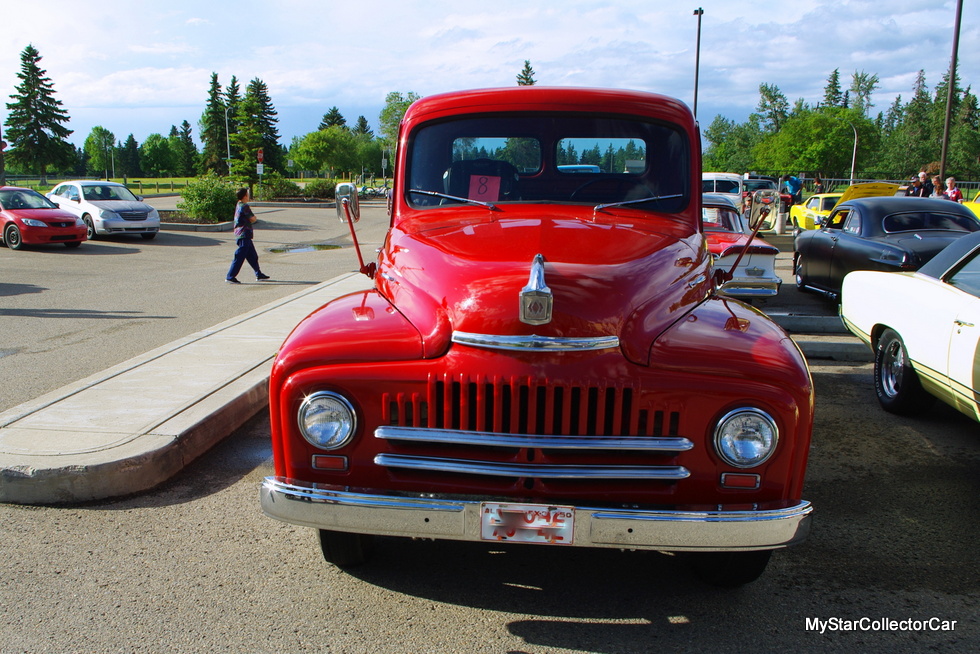 Andre promised he would not alter the original integrity of the 69-year-old truck with the exception of one change: he wanted to custom-built a kid-carrier into the truck so his young son could ride along with him in the cab. 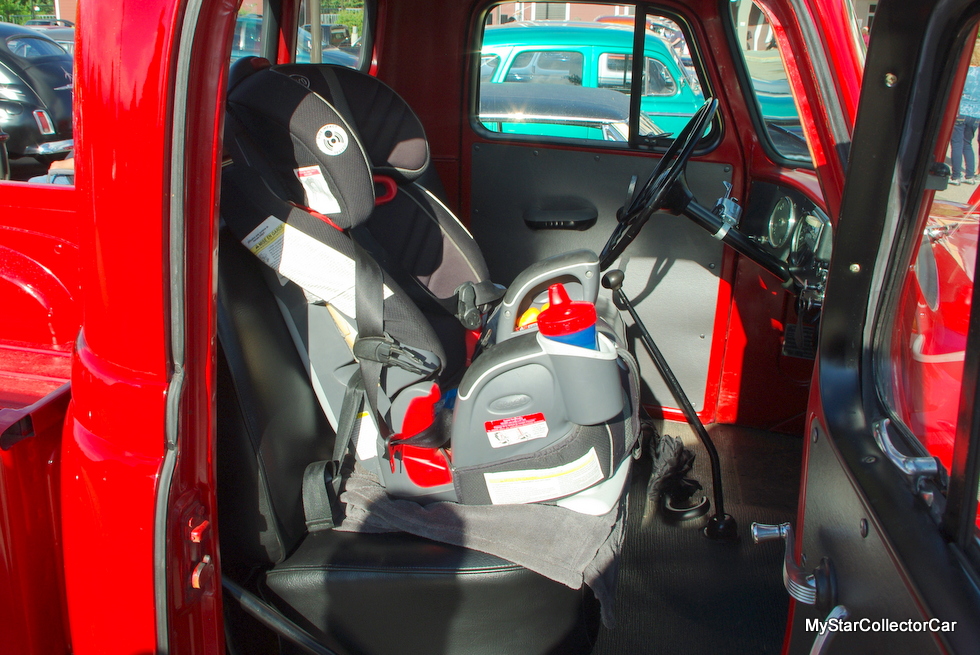 The result was the IHC now sports a kid carrier so Andre’s son (Alan’s great-grandson) can enjoy trips in the old pickup truck.

Andre is a young car guy who “loves old vehicles”, in his words, so the 1950 International Harvester is an excellent fit with him. He mentioned that his IHC will do about 40 mph (75 km/h) on the road but that is a comfortable speed for the truck and Andre because he gets to have a look at the past whenever he has an opportunity to drive the pickup. 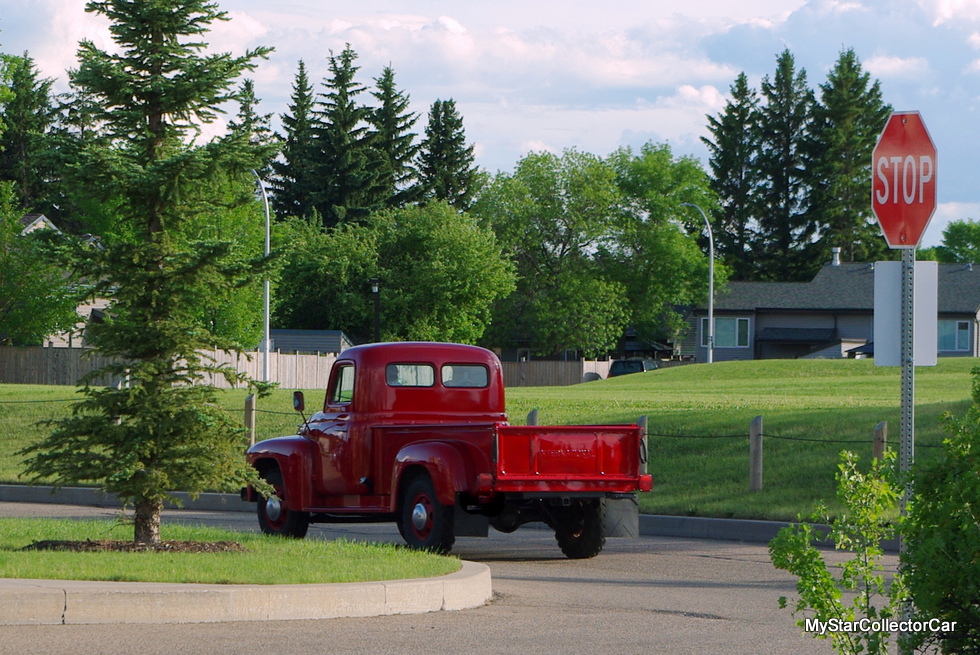 That past is a reminder of how his grandfather Alan used these hardworking trucks to build a business when he was a young man behind the wheel of an IHC pickup truck. 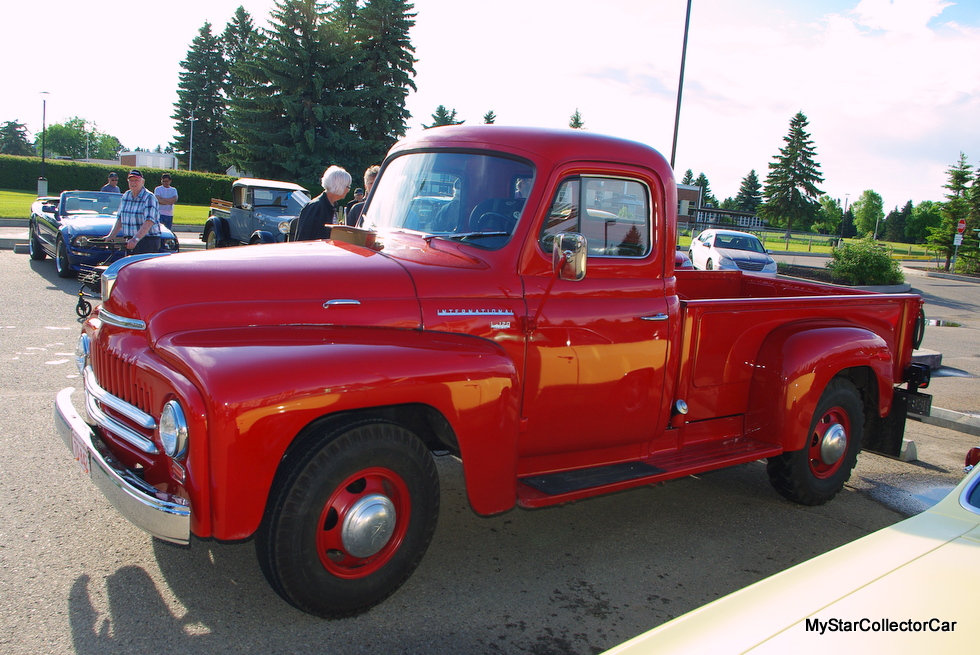 The 1950 International Harvester truck has become a family heirloom that has linked a grandfather with his grandson in a very powerful way. Andre made a promise to grandfather Alan that he would keep the truck in its current restored condition as a reminder of its strong link to his granddad. 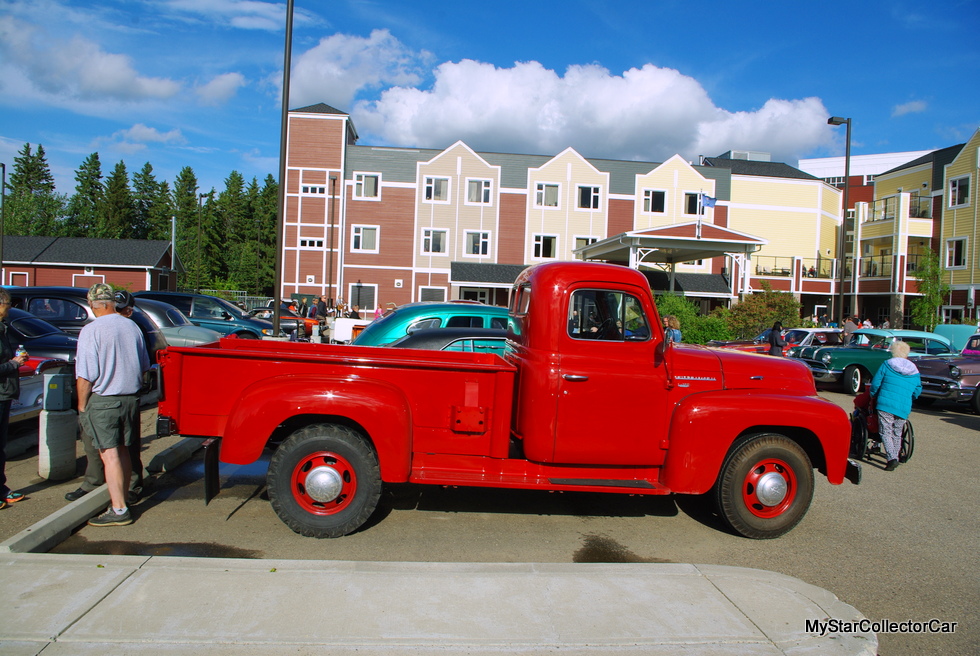 The same message will be applied in the future when Andre gives the truck to his own son and continues that strong family bond to the IHC.

CHRISTMAS CHRISTINE…A 1963 CADILLAC CONVERTIBLE STEALS THE SHOW IN A CHICK...