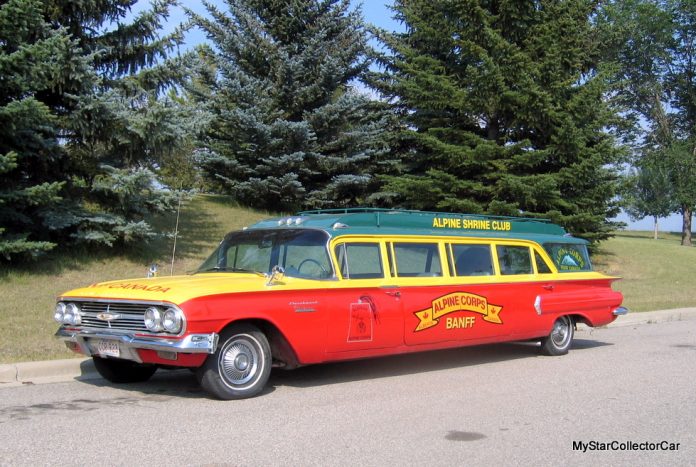 Spotting old cars is like an addiction for car guys-in fact it’s a 24-7 job.

That’s why this giant-sized 1960 Chevy limousine had a group of guys around it even though a wedding reception was underway.

‘The good news is that everybody found their seats before the festivities began although there were anecdotes about guys being dragged away by their ears.’

No wonder-this car really gets your attention and it’s not just because of its paint job.

This is the ultimate 1960 Chevy-the Bob Seger “out in the back of my ’60 Chevy” but it has enough room for a volley ball game let alone the activities behind Seger’s anthem to nostalgic youth.

Pat Ferguson from the Shriners organization was kind enough to fill in the blanks on the car’s history “It started life as a 1960 Chevy Bel Air & was a Brewster Transportation touring car until the Banff Shrine Club (Now Alpine Shrine Club) acquired it in the late 60’s. It was originally a medium blue color just like the rest of the Brewster fleet & they had it stretched by Sherwood Body Co. in the US”. 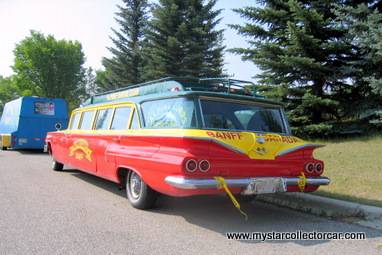 The car needed a fair amount of power to haul the daily loads “It originally had a 3-speed manual transmission but when it became a parade car for the Shriners they had an automatic transmission put in so they wouldn’t be burning out clutches! It has the 409 Chev engine, & is a rocket on the highway. It doesn’t particularly like to run slow in parades”.

The car was designed to reflect function over form-not a great leap of logic when you’re discussing a car that’s nearly a football field long “A couple of interesting points to mention are, that none of the doors on the driver’s side of the car open except the driver’s door to keep people from exiting into traffic. It also came with rear axle air bags to level the car when loaded with 18 passengers & all of their baggage”. 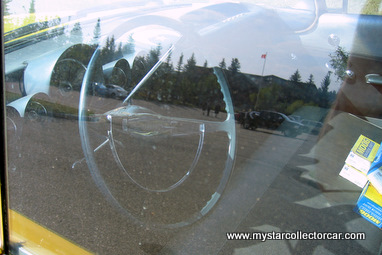 The beauty of this working Chevy is simply that it’s still working. Most of these types of vehicles became the biggest part of a washer-dryer combination so seeing this car working in 2010 explains why all the male wedding goers were drawn to the car like moths to a light. 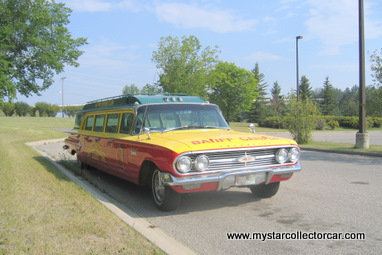 ‘There was no word on whether the bride suggested parking the 50-year-old classic behind the building for the next wedding.’