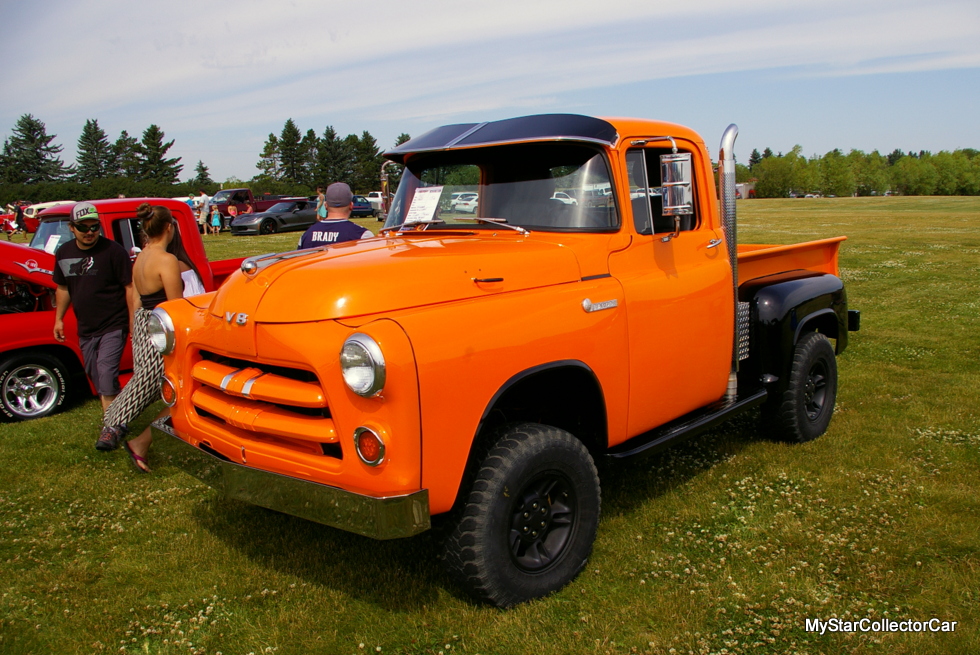 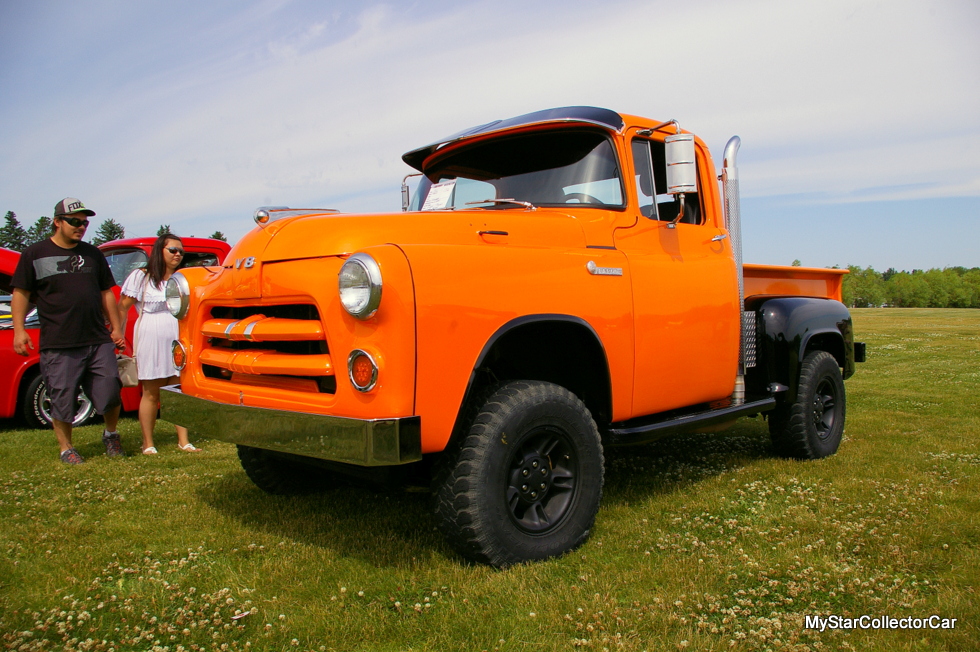 A 1955 Fargo step side pickup with a set of exhaust stacks is likely not a stock truck with a factory flathead six under its gull wing hood.

The rebadged ’55 Canuck truck had undergone a major transformation since it left the factory all those years ago in Detroit-not Canada.

MSCC was fortunate enough to track down owner Gilbert Tkachuk and he was able to fill in the blanks on his Fargo because Gilbert was the guy who built his resto-mod pickup. 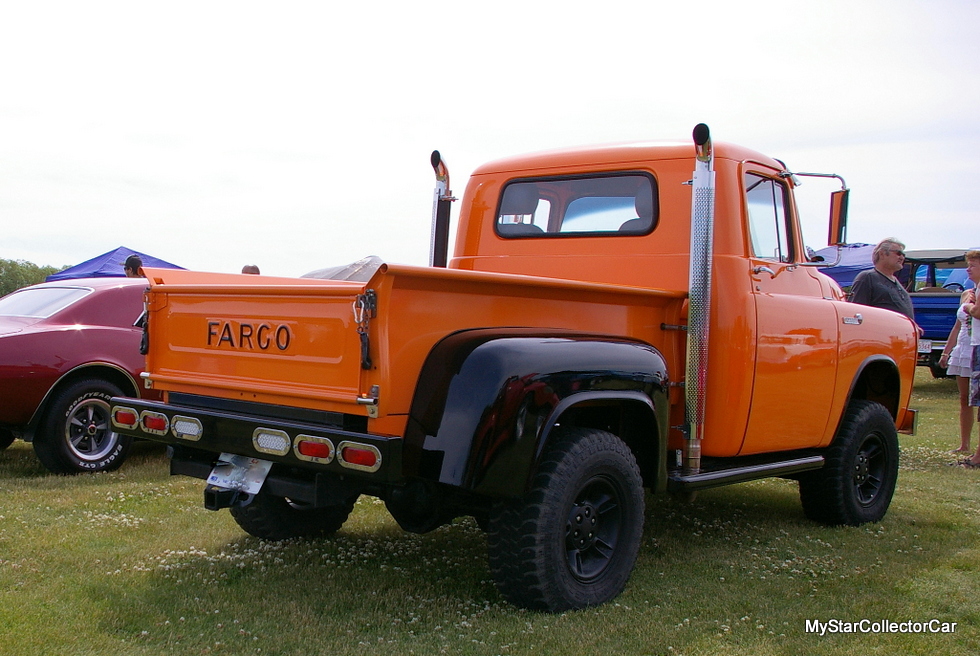 The project began with a written-off 1998 Dodge Dakota 4×4 that Gilbert purchased as a donor vehicle in 2014 for his Fargo. Gilbert told MSCC that he “had it (the Fargo) forever” and first noticed the truck sitting in a neighbor’s field as a young guy. 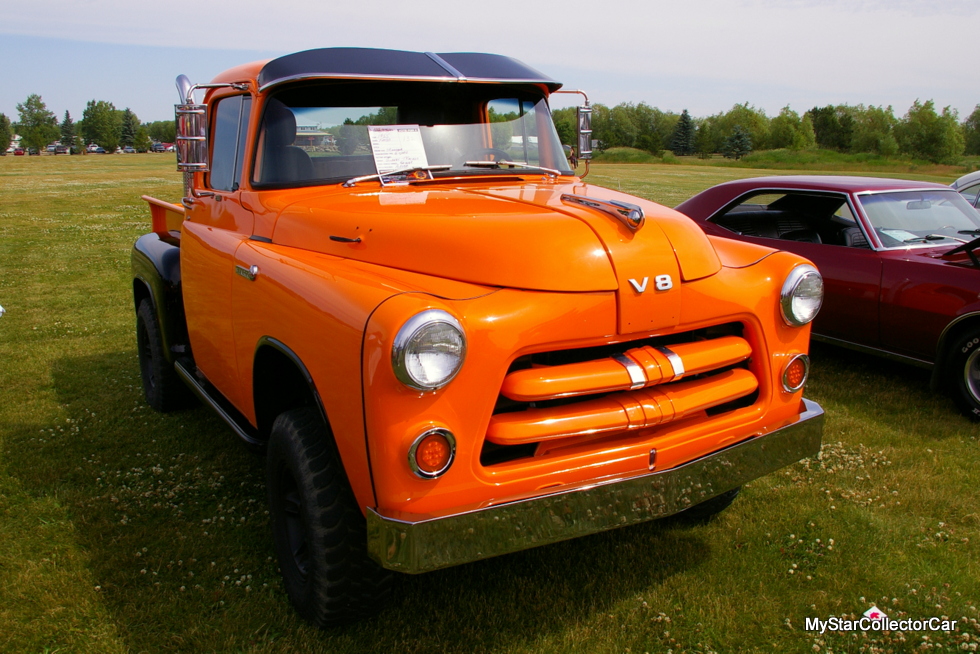 The truck was not going anywhere and Gilbert catalogued its existence when he spotted the Fargo many years ago. The Fargo needed plenty of work and the donor Dakota was just what the old truck needed to get back on the road.

Gilbert told MSCC he had a running truck by April 2015 and detailed how he was able to put a ’55 Fargo on a ’98 Dodge Dakota frame. The process began when Gilbert shortened the Dakota chassis by 19” so the Fargo body would fit on the frame.

Gilbert was able to make the Dakota think it still existed by “not cutting any wires”, in his words. The process was made easier because Gilbert chose to get rid of the factory 6-volt system on his Fargo and also used the entire instrument cluster from the Dakota.

The result was a smooth transition from the electronically complicated EFI system on the ’98 Dakota 318 to the formerly simple six-banger in the Fargo. The Dakota’s 5-speed manual transmission meant the process was less complicated when it came to tranny choices for Gilbert. 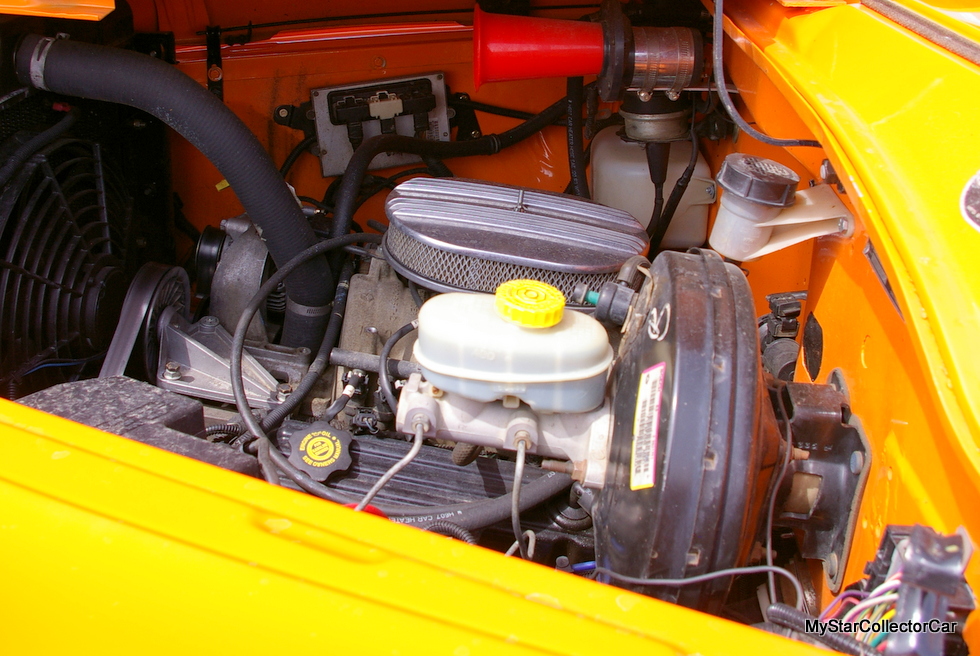 The division between old and new becomes obvious when Gilbert explained his wiper/washer system. The chrome knob on the dash used to be part of the Fargo’s vacuum wiper system, but now it is an electric wiper control that was borrowed from a 1956 Fargo 3-ton truck. 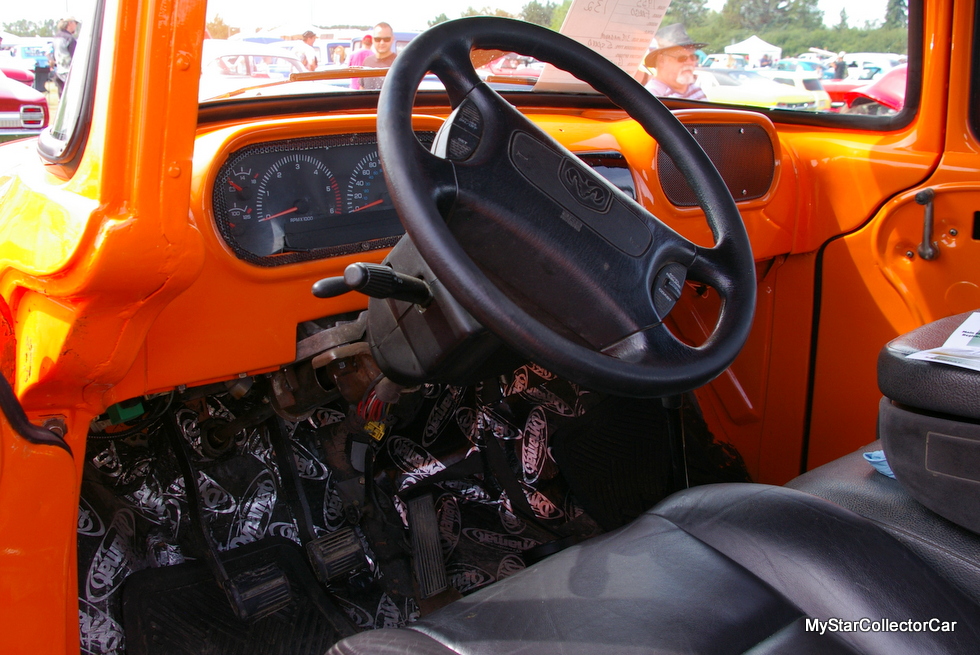 However, the electric washer system is pure Dakota, right from the spray nozzles to the lever mounted on the side of the steering wheel.

Gilbert was unable to retro-fit the Dakota’s AC system into the Fargo due to a lack of room, but the vent in front of the windshield still opens up to deliver fresh air to the Fargo‘s cab. 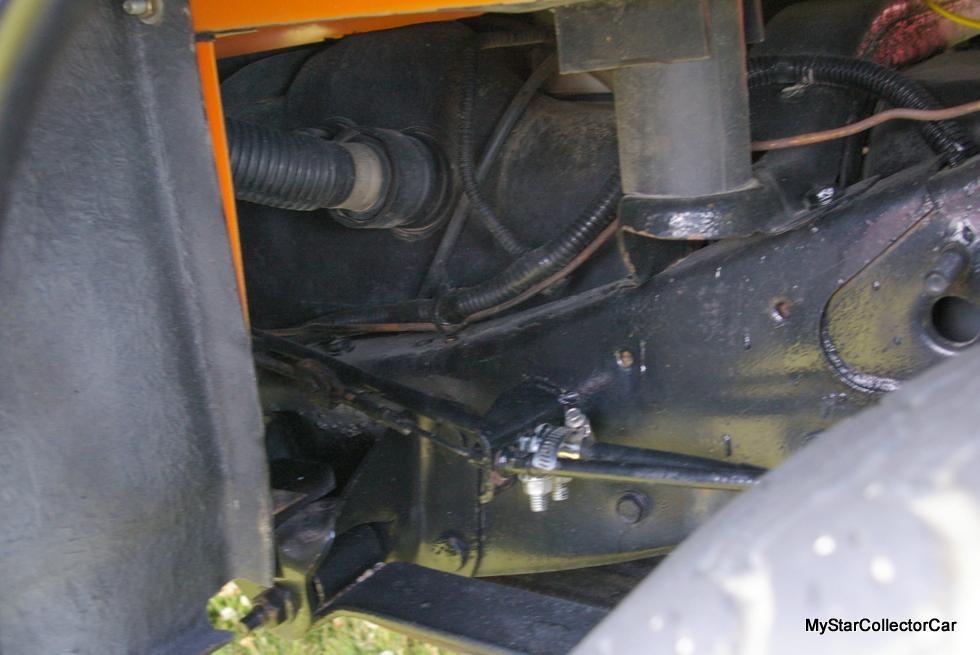 Gilbert also custom-built the front and rear bumpers for the Fargo so he was able to include plenty of rear lights for his Fargo. The bumpers are built very strong, according to Gilbert. In fact, Gilbert said, “if they hit me that hard, I ain’t gonna notice it.” 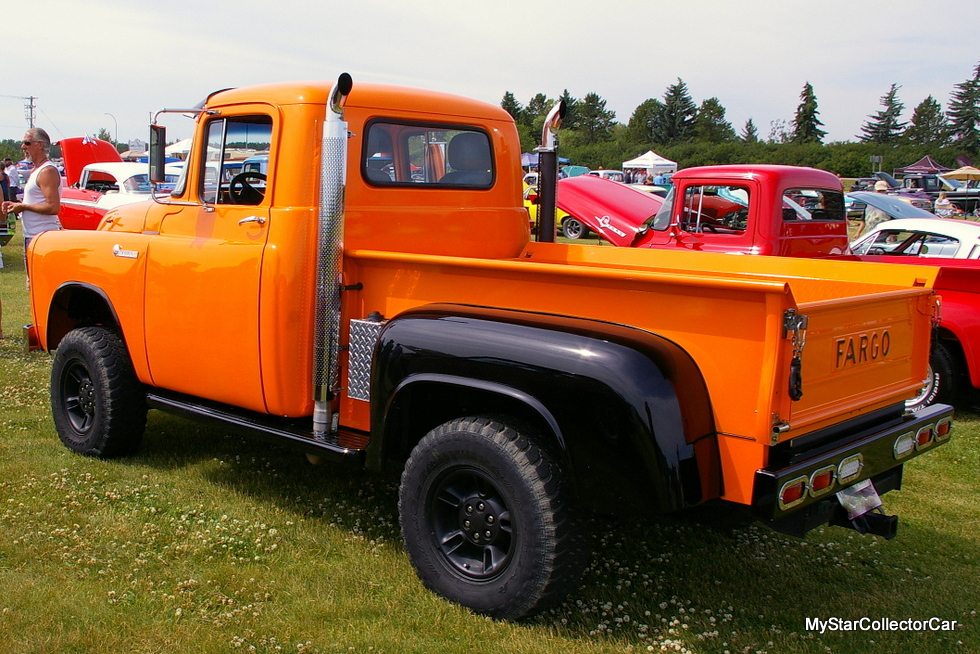 One thing was noticed after Gilbert completed his truck: his high rate of speed in the newly energized Fargo. A Mountie pointed his finger at him as a warning when Gilbert was approaching him rather rapidly on a highway. 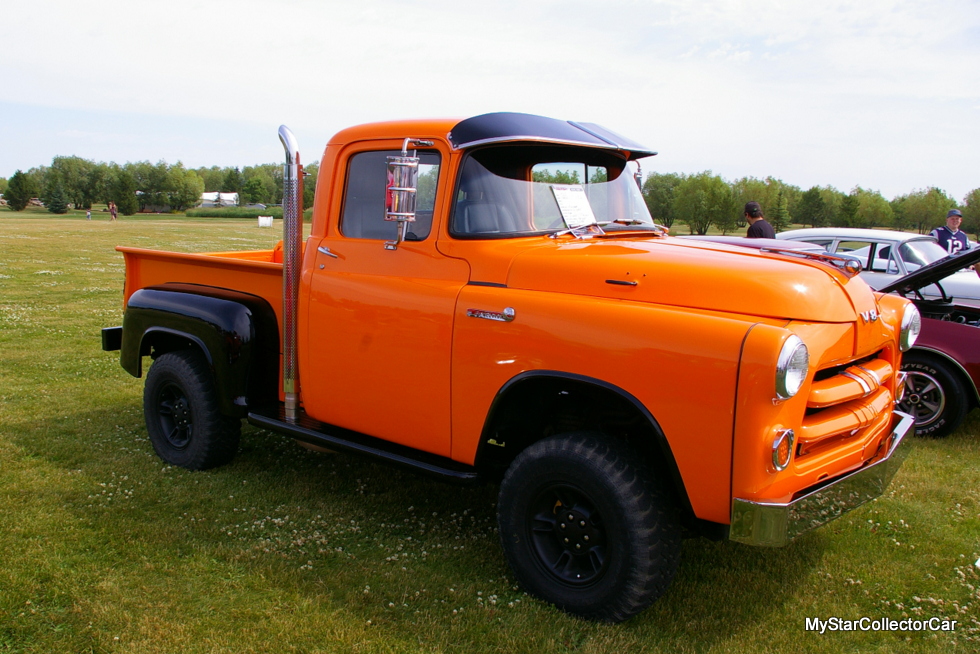 One other thing is also certain about Gilbert and his Fargo truck: the man knows what he is doing when it comes to building the perfect resto mod.