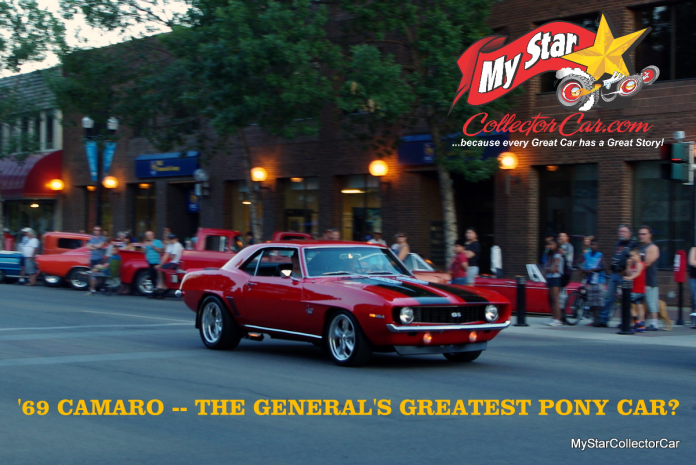 The first-generation Camaro was spawned by a sense of urgency.

The panic was created by the sales success of the Ford Mustang, the automotive legend that pioneered the pony car category because of its equestrian name.

The first-gen Camaro shared a basic platform with the Chevy Nova, not unlike the first Mustang’s platform link with the compact Falcon models. The war between Ford and GM has defined their relationship for decades (with no end in sight) but the Pony Car wars of the mid to late 1960s were the stuff of legends as the two automotive heavyweights exchanged blows over this new market created by the 1964 Mustang.

The first-gen Camaros were a runaway success for the GM crew from 1967-69 and set the standard for their future pony cars, including the 2020 versions.

However, there is one Camaro model that has led the pack since its introduction in time for the 1969 model year: the 1969 Camaro.

The numerous reasons for the ’69 Camaro’s enduring popularity have propelled the car well into the stratosphere of the car hobby.

The first thing that springs to mind is the 1969 Camaro was the last of the first-generation models before GM moved ahead with its completely redesigned 1970 ½ Camaro model.

The new decade (1970s) meant a time for change-even for the very successful first-generation Camaros. The ebb and flow of the highly competitive domestic auto industry forced GM’s hand about the future of the Camaro, and it did not include the style of the first run Camaros from the last decade.

However, there were other reasons the ’69 Camaro has assumed the top run on the Camaro ladder, including its style differences compared to the 1967-68 models. The three model years still shared the same basic platform, but a 1969 Camaro had some subtle sheet metal design changes.

The car was given retooled body components that gave it a muscled-out style that resonated very well with buyers and admirers. The lower, meaner appearance was also suitable for the large array of performances choices available on Camaros in ’69.

A Camaro RS was a luxury model with enough creature comforts to garner interest, but it fell a little short in the performance department by late 1960s muscle car standards. The factory answer was the Camaro RS/SS because it offered better horsepower options for customers, including the 1969 Indy 500 convertible pace car versions.

The horsepower choices got very serious in 1969 when GM got behind the COPO (Central Office Production Orders) program and offered beastly versions of the 427 cubic inch big block engine in iron or lightweight aluminum options.

The ’69 Camaro’s need for speed did not end with its COPO models. Many of the COPO cars were sent to Yenko Chevrolet for even more of a speed massage.

The COPO 9560 was arguably the ’69 Camaro’s finest hour because the car housed the aforementioned aluminum 427 in ZL-I form and tried to keep a conservatively estimated herd of 425 horses happy under its hood. There were only 69 of these rare GM pony cars built and now they are considered a Holy Grail car in the hobby.