Stephen King wrote about the most evil car on the planet when he created ‘Christine’, a 1958 Plymouth Fury assembled with the rare mass murderer option.

The car was built for speed and homicide right from the factory and accumulated a serious body count over a long career of unhappy motoring for its unlucky owners.

Christine was mostly blood red in color, a practical if unavailable color choice for the real 1958 Plymouth Fury models, but a suitable shade for evil on four wheels.

The movie version of ‘Christine’ became a cult classic in car world, and a real-life horror show for fin-car guys who witnessed the destruction of many 1958 Plymouths that were fatally harmed for the movie.

The skinny on the movie and novel was a car that owned its driver. Christine was an evil b***h of a car, and was capable of killing off friends and foes of its current owner/future late owner. Nobody was safe from the wrath of Christine.

Eventually everybody who sat behind the wheel of Christine ended up with a toe tag. Throw in a herd of dead pedestrians who crossed Christine and you have yourself a highly motivated V8 powered population control device.

So now the world’s largest automobile manufacturer suddenly finds itself saddled with a large fleet of potential Christines. Toyota has enjoyed a long history of quality and reliability until recent brake and gas pedal issues put them in the ditch.

The vehicles have a strong potential to accelerate without warning in a very Christine-like fashion. Suddenly frightened drivers are merely along for the ride unless they figure out how to regain control of the car by a shift into neutral and generous use of the brakes.

However, brakes are also an issue on some Toyota models, so the beleaguered car company is in a double-header of misery right now. Maybe the cars are not an actual evil entity like Christine, but they have the potential to kill people just the same. 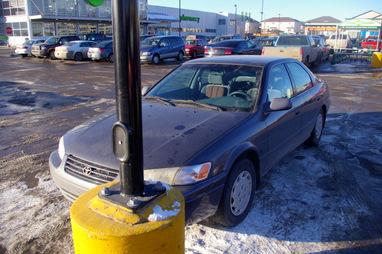 So how would Christine do in a showdown with a Toyota?

Very well I think. Christine also had the ability to heal itself when damaged by going in reverse for awhile. So far no Toyota comes with this option.

Christine could also take a hellacious beating and would still come back for more. The Rocky Balboa option is not quite as evident in today’s Toyotas, but many satisfied owners would swear that previous models had this option.

Christine was probably too emotional for a car and there are no reports of Toyotas that attempted to kill their owner’s girlfriends in a fit of jealousy. Advantage leans toward Toyota on this point, because optional homicidal jealousy is not a big ticket item for car buyers.

Christine could also drive itself if necessary. The movie version had a scene where Arnie (doomed owner) is drinking and driving at high speed and Christine takes control of the ride. There was no danger to anyone on the road outside of any idiot that accidentally p****ed off Christine.

Toyota has no such autopilot option, evil or otherwise.

So any comparison between Christine and Toyota boils down to this: Efficiency and fuel economy with a hint of highly unnecessary danger (Toyota), or an all-out massacre of friends and enemies with an absolute certainty of premature personal death (Christine).

The evil Plymouth Fury wins every time in a street fight.

DENNIS:”You’ve got a really good point here . Are we going too far with with these “modern” cars? We already have cars that will park themselves, maintain a speed down the road (most of the time) by themselves, “communicate” by themselves (ON Star). Cars with display screens built into the dash (what ever happened to watching the road?), “traction control”, “anti-skid control”, “door lock control” and “climate control” just to name a few. Have you ever watched the show “Bait Car” on TV? Where the cops not only know where the bait car is going but they can lock the doors and shut it off? Is it too big a stretch to think that you might be cruzing down the highway at 75+ in your own car and some kind of “glitch” could shut down your car and lock you in it, in the fast lane?

“Christine” came out in 1983 but I’m reminded of a movie that came out in 1968 “2001: A Space Odyssey”, where the H.A.L. 9000 computer takes control of the space ship and begins to kill off the crew, “for their own safety”.
Is it too big a stretch to think that we have reached a time where your car could decide it’s too warm in the cabin and the “climate control option” could turn on the air conditioning, even though it’s below 0 outside the car? and a little “glitch” in the “ambient temperature display” (you know, the little thermometer and compass just above your windshield) decides that it’s “unsafe” for you to to be outside the car and locks you in?
Maybe I’m just paranoid in my old age but I think your link between “Christine” and Toyota’s problems (as well as all the “computer cars”) might be worth a little more introspection.
SPONSORS