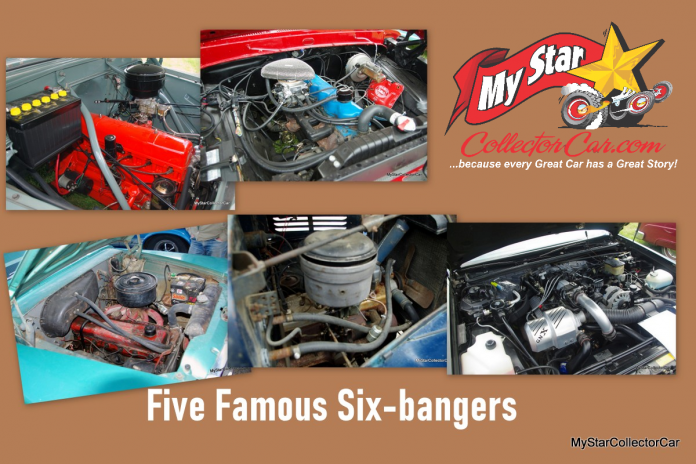 Most car guys are aware of the six-cylinder engine and its place in the grander scheme of things in their world.

It would be accurate to suggest the six-cylinder engine played a huge role in domestic automotive history because it was a popular choice for the frugal (aka cheapskate) car buyer during a bygone era. There was nothing seriously wrong with a six-banger under the hood because most of them met or exceeded the velocity requirements of the road systems in yesterday’s North America. They just did not get to the speed limit in a timely enough fashion for many car guys.

Nevertheless, the humble six-banger was a big part of yesterday’s domestic vehicles because they were plentiful and answered the bell for most economy-minded (cheapskate) buyers. Incidentally, MyStarCollectorCar will stick to North American six-cylinders and ignore the exotic six-bangers found under the hoods of expensive foreign cars sold during that era because the Euro cars were not even a remote part of our reality back in the day. Therefore, it is easy for us to ignore them in 2020.

One of the more famous six-cylinders built by Team Detroit was the OHV (Overhead valve) Straight Six from the General Motors family. This six-banger was ahead of its time when it debuted in 1929 and became a mainstay engine choice for the next 25 years until the debut of GM’s famous small block V-8.

This famous GM powerplant became known as the Stovebolt Six because of its valve cover fasteners and their resemblance to stove bolts. The Stovebolt Six eventually fell by the wayside in 1963 and disappeared into the annals of GM history.

The second choice on our list is the Chrysler flathead six that debuted in 1929 on their De Soto models. The flattie six understandably had flat cylinder heads because the valve train is not housed in them. Instead the valves are positioned in the block and the heads are simply designed to provide compression for the combustion chambers.

The workhorse Mopar flattie six provided solid torque but was limited by its inability to run with the big V-8 dogs and largely disappeared from the Chrysler lineup by the dawn of the 1960s. The limited production exception was the Dodge M37 ¾ ton military truck that offered the flattie six until 1968.

Our third choice here at MyStarCollectorCar is Ford’s famous blue collar 300 cubic inch OHV straight (inline) six-cylinder engine. The 300 I-6 (Inline Six) is arguably Ford’s most famous and beloved six-bangers and was offered from 1965 until 1996 by the Blue Oval gang.

The 300 I-6 gained a reputation as an “un-killable” engine in the finest tradition of Jason Voorhees (from Friday the 13th)-only without carving up teenagers in its long history. Its legendary durability under harsh use made this famous Ford six-banger a natural choice for our list here at MyStarCollectorCar.

The fourth and fastest member of our illustrious six-banger list is the engine found under the hood of the limited production 1987 Buick GNX. The Buick V-6 engines were already an automotive version of lightning in a bottle, but the ’87 GNX versions were massaged into legendary status as soon as they left the dealership with an owner who just won the specialty car purchase lottery.

The cars were an instant collectible equipped with a raging monster of a six-banger beast that would hit 60 mph (a little under 100 km/h) in under 5 seconds. Remember-this was 1987.

No list would be complete without our fifth and final choice: the famous Chrysler Slant Six, also known as the Leaning Tower of Power because of its unusual cylinder design that was positioned at a 30-degree angle from the block. The Slant Six engine debuted at the dawn of the Sensational Sixties and helped Chrysler gain a foothold in the target market of buyers who wanted efficient power in a small package.

Like Ford’s 300 I-6, the Slant Six also gained a sterling reputation in the coveted hard-to-kill field and delivered dependability, if not neck-snapping, along the way.

The Slant Six was born in 1960 and died at the turn of the 21st century after a long legacy as one of Chrysler’s most reliable but unspectacular performers.

The six-banger has always been a big part of the domestic automotive industry’s legacy during a bygone era, but it never gained many fans in the car guy world over the years.

Unless they are willing to throw the six-banger’s long legacy of workhorse dependability into the debate.