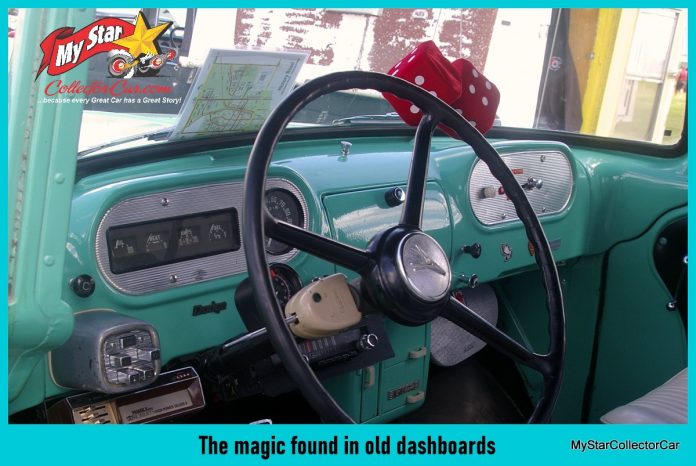 There was always something for passengers in a car to watch during the dark days before cell phones turned people into mindless zombies with muscular thumbs.

The instrument panel monitored the speed of the car, along with its fuel consumption, engine temperature, oil pressure and current (pun intended) condition of its charging system. The instrument panel has always been an important indicator of the vehicle’s relative health, although the information became less accurate when Detroit replaced gauges with warning lights, also known as “idiot lights” by their many detractors.

Just for the record, warning lights gave little notice before they lit up the instrument panel and were quickly followed by catastrophic engine failure in many cases, but they looked great in an instrument panel if drivers liked a good light show.

We at MyStarCollectorCar love almost every stock instrument panel found in vintage vehicles because they showcase a bygone era in automotive style and engineering-even if some of them had idiot lights in the configuration. An excellent argument could be put forth about many candidates for coolest retro instrument panel, but MyStarCollectorCar decided to pick our five favorites.

The first instrument panel on our list can be found on 1959-60 Chevy cars. The centerpiece was a large circular speedometer with two smaller gauges on each side of the speedometer.

The ’59-60 Chevy instrument cluster was clean and stylish, so it has become a big-ticket item in the custom vehicle world because of its cool design. It was clear the 1959-60 Chevy models took most of their exterior design cues from the rocket age style of domestic cars during that Space Race era, so their instrument panels needed to reflect that vibe as well.

The second instrument panel on our list is the wild-looking 1961 Plymouth dash. These cars may have undergone a major tailfin amputation in ‘61, but the forward look from the driver’s seat still provided an amazing view from inside the car.

The third member of our instrument panel list can be found on the 1949-51 Ford cars, a simple circular instrument cluster that showcased the speedometer and surrounded it with four of the most important automotive gauges (fuel, temp, oil, and generator) from that era.

The ’49 Ford heralded the dawn of a new post-war automotive design for the Blue Oval people, but the design of the car’s instrument panel signaled a practical pre-Space Age era for automotive builders.

The fourth addition to our list is the 1961 Chrysler Imperial instrument panel. The famous push button transmission mentioned earlier in this article was a part of the overall charm of the dashboard layout in the ’60 Imperial, along with the jet plane-like square steering wheel. But the two-toned black and white speedometer/gauge cluster was the star of this Mopar flagship’s show.

The fifth and final member of the MyStarCollectorCar instrument panel team is the one found in the 1966 Olds Toronado. The ’66 Olds Toronado broke the mold in terms of conventional domestic automotive engineering because it was a big block front-wheel drive two-door coupe that was large and in charge in 1966.

The debut of this unique car included an unusual instrument panel that featured a center-mounted speedometer that was on a roller MPH indicator instead of a typical speedometer needle. The speedometer was clearly the star of the show, but the supporting cast of instruments included the fuel, temp, and alternator gauges, along with an oil pressure warning (idiot) light.