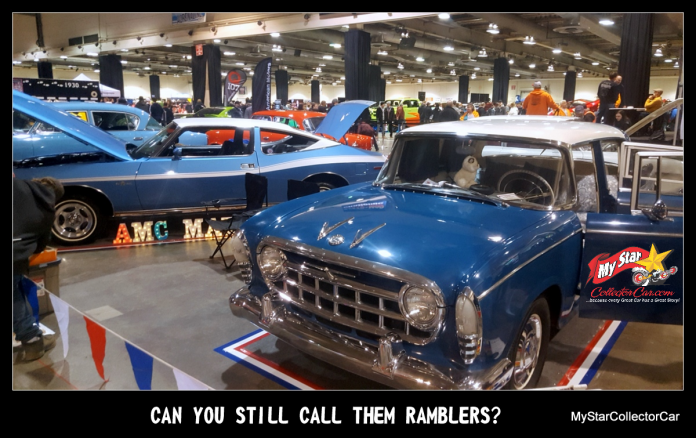 One of the big-ticket items in today’s world are the rigid guidelines about political correctness in every facet of our lives.

These days every one of our actions is subject to extremely close examination that rivals electron microscopes for intensity levels.

The car hobby is not immune to this new age of hyper-sensitivity so we at MyStarCollectorCar decided to address the hot button issue of the Rambler name as a general stereotype of the AMC brand during its heyday as the little car company that almost ran with the big dogs in the North American automotive industry.

To be specific, is it right or wrong to label every vehicle built by American Motors as a Rambler?  Our answer is yes and no, a wishy-washy combination that will likely satisfy none, but hear us out anyway.

The Rambler name on cars extends back 120 years when it was part of the earliest automotive age and built by a bicycle manufacturer named Thomas Jeffery who used the Rambler name on his bikes prior to its use on his cars.

The earliest Ramblers hit the highways (or what passed for highways) from 1900 until 1914 when the name was retired and re-badged as a Jeffery by the late founder’s son in honor of his father.

Nash purchased the Thomas B. Jeffery Motor Company in 1916 and retired the Jeffrey car name forever after the transaction. However, the sale included the proprietary rights to the Rambler name and Nash would reintroduce the brand in 1950.

Nash had merged with Kelvinator (famous for its kitchen appliances) and maybe that is why the 1950 Nash Rambler bore a striking resemblance to a refrigerator during its four-year production run under the Nash-Kelvinator banner.

The merger of the Hudson Motor Company and Nash-Kelvinator meant a name change when the two car companies formed American Motors and began a battle with the Big Three (General Motors, Ford and Chrysler) as a larger-but still small-auto builder.

The Nash and Hudson members of the American Motors family continued to exist and offer Ramblers to their customers during the 1955 and ’56 production years until they were phased out of AMC’s plans and ceased to exist.

However, the Rambler became a standalone name in the AMC lineup with the advent of the 1957 models and therein lies the confusion for many car guys. The Rambler name had finally returned to the lexicon of the automotive world and it left a big impression on car guys.

Most car guys from that era simply labeled every AMC model as a Rambler because the name was used on American Motors’ most famous models, including the nimble little Rambler American.

George Romney (father of Mitt Romney) was the top dog at American Motors during the early 1960s and decided to add the Rambler name to its other popular models like the Ambassadors and Classics, as well as the Americans.

Romney hoped to streamline the AMC lineup and share many basic components under the general Rambler name as a cost-saving measure. However, Romney left AMC and his replacement Roy Abernethy decided to phase out Rambler and build new models under the American Motors banner to battle the big boys from Detroit.

Eventually Rambler was retired as an AMC name and faded to black under Abernethy’s watch. Nevertheless, car guys of a certain advanced age still call every American Motors product a Rambler, including their sporty models like the AMX and Javelin.

Our 2020 social guidelines will decide whether we have offended all AMC owners by calling their cars Ramblers.

If found guilty, we at MyStarCollectorCar are deeply sorry for our thoughtless behavior.