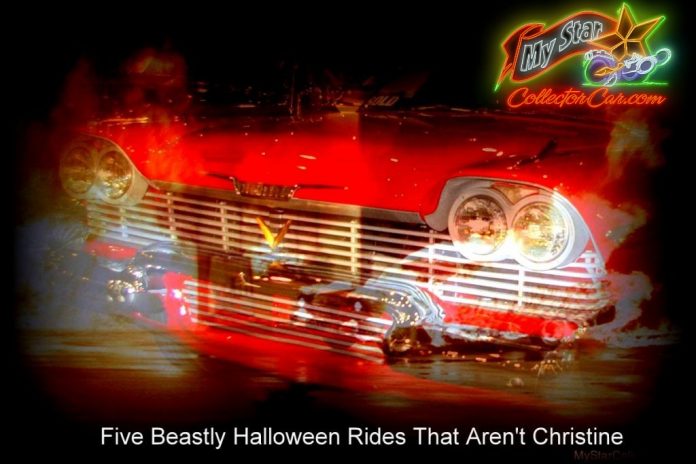 The most famous example of hell on wheels is Christine, the 1958 Plymouth Fury created by Stephen King in his horror story factory and immortalized by director John Carpenter in ‘Christine’ (the movie) in 1983.

One of our future MyStarCollectorCar writers read the book when it was first published and noticed a glaring error in the King novel.

The carnage in the movie version sacrificed several 1958 Plymouths during the filming and instantly provided the horror for dedicated Mopar fans who witnessed the wholesale destruction of the finned beauties on the big screen.

The future MyStarCollectorCar writer mailed a letter to Stephen King during a pre-email era when celebrities responded to their fan bases. King assured him that future editions of his Christine novel would have a push button automatic transmission reference in the text and noted the responsibility for the wholesale destruction of ’58 Plymouths was on movie director John Carpenter.

Ultimately, King and Carpenter created one of the most iconic fictional accounts of a menacing and intimidating car that took no prisoners when it was crossed in any way. We at MyStarCollectorCar want to list five real-life cars that were created with that same philosophy in mind, given that we are in the throes of the Halloween season.

The first car on our list is the 427 Shelby Cobra. These cold-blooded monsters were brutish kings of the road when they debuted in 1965 and immediately created panic in the streets. A 427 Cobra was a barebones killing machine that required enormous driving skills to handle it in beast mode. That is why legendary racer/builder Carroll Shelby owned one and was willing to put his name on it.

The second car on our list is the 1970 Chevelle SS 454. Chevy wanted to introduce its restyled Chevelle in a big block version because the rules were relaxed on engine size in 1970. The result was a giant 454 cubic inch predator under a cowl induction hood that rammed fresh air into the engine’s carb.

The apex predator in the 1970 Chevelle SS 454 world of mayhem was its LS6 engine option that produced 460 horses with unbridled menace as its prime directive. The ‘70 Chevelle SS 454 was a deadly monster in monster’s clothing that could easily create panic in the streets that year.

The third car on our horror list is the 1969 Mustang Boss 429. The Boss 429 was no mere pony car, it was an evil stallion of a car with a high-octane thirst for blood on the streets. Ford needed to produce a minimum number of 429 engines to satisfy NASCAR’s definition of factory stock power in ’69, so they built the limited edition Boss 429–even though no Mustangs competed in that race series at the time.

One needs to ignore NASCAR’s loose interpretation of factory car engine rules in ‘69 and concentrate on the malevolent killer under the hood of the 1969 Boss 429 because this predator pony car feasted on the weak it ambushed on the street.

The fourth member of our evil-in-shiny-metal list is the 1959 Buick. The famous 401 cubic nailhead engines were introduced to high end Buick models in ’59, but the front grille of every Buick built that year was the car’s claim to menacing fame.

The offset design of the 1959 Buick’s headlights made the car look murderously angry to onlookers, a style feature that made us choose this car for our list so we could avoid retribution from ’59 Buicks if they carry grudges like Christine.

The fifth and final member of our evil on four wheels list is a close relative of Christine, namely the 1958 Chrysler 300 D equipped with a 392 Hemi that roasted the street (and Bonneville Salt Flats) competition while disguised as a luxury car model.

The 300D’s rear fins showed its Forward Look style kinship with Christine, but this car was a pioneer muscle car that took no prisoners on the street and track. For example, a 392-equipped Chrysler 300D topped 158 mph during a speed run on the salt flats in 1958, a mark that annihilated the competition that year.

HOT FUN IN THE SUMMERTIME AT THE SYLVAN LAKE CAR SHOW