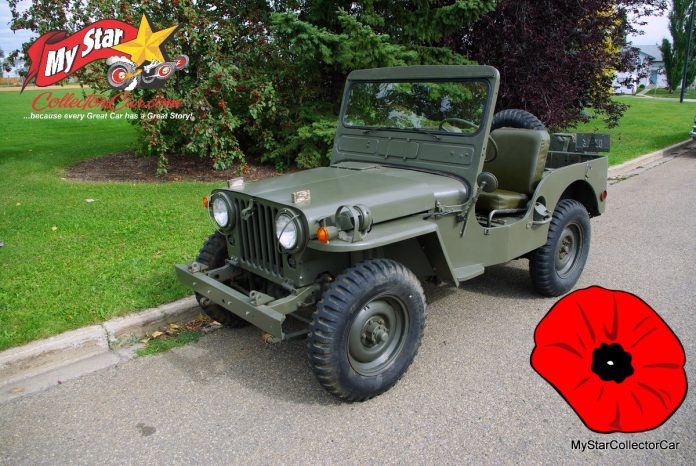 The Jeep is one of the most famous vehicles ever made in automotive history, primarily for its important role in World War Two and subsequent conflicts.

Ford was an important part of military vehicle manufacturing, including their Jeep models, during World War Two. In fact, their military version of the Jeep was reintroduced by Ford of Canada during the early 1950s-including Al Nickolson’s 1952 military Jeep.

Al Nickolson is a retired Mountie (RCMP police officer) with a huge interest in military vehicles. Al is well-known in his historical military vehicle circles because he owns several vintage Canadian armed forces vehicles and is considered enough of an authority in the hobby to be a judge at their events.

He is currently in the middle of a complete restoration on another vintage military Jeep but enjoys every minute behind the wheel of this 1952 Jeep.

Al became interested in the mechanical angle at an early age when he was a member of the Canadian Sea Cadets program and learned about the engineering behind military equipment. His experiences became a lifelong interest, so Al continued to immerse himself in the military vehicle hobby during his long career in the RCMP.

Retirement freed up Al’s time, both as an enthusiast and a restorer, so he built and bought his way to a small fleet of military vehicles. His ’52 Jeep was previously owned by another military vehicle enthusiast who unfortunately passed away, so Al became its current owner at the behest of the late owner’s son. Al wanted to ensure the previous owner’s Jeep would become a tribute to the man and his plans for it.

As mentioned earlier, Al is considered an expert in the field of vintage military vehicle history, so he filled in a few blanks about his 69-year-old Jeep. It was built by Ford of Canada during the Korean War but saw no service in that conflict because the military used World War Two Jeeps, given their abundance and their stellar track record in the earlier war.

Al is an expert in the engineering and equipment found on a typical 1952 Canadian military Jeep and has included both in his current (and future) plans. The first unique feature on his Jeep is its 24-volt electrical system, complete with a circuit breaker system instead of fuses.

The military Jeeps were built to carry extra juice for portable radio communication systems, along with any other requirements for more power in battle situations.

Another one of the Jeep’s unique military features are the front fender-mounted blackout headlights that made it less visible during nighttime operations. Al’s Jeep was also built for quick repairs when necessary, including a hood that swings backward to a 90-degree angle with wooden supports on its front to prevent damage, as well as a pair of engine hooks in case it needed to be pulled quickly for a fix.