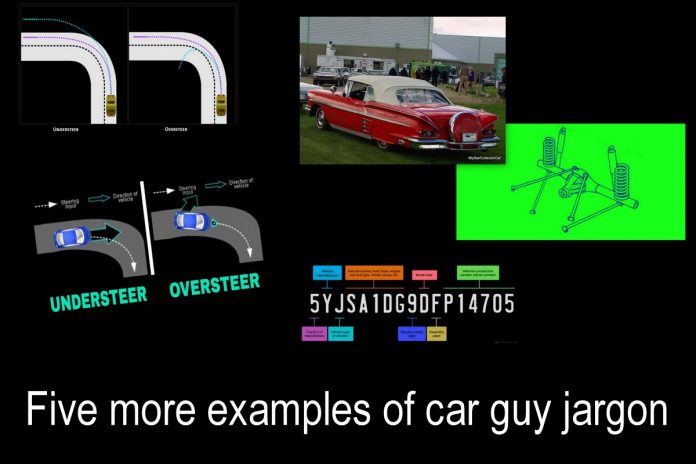 Car guy world has many terms that are part of the lingo in the hobby, but these terms may be an entirely new language for many people who are not familiar with them.

The first term on our list is a 4-link suspension. The 4-link part may be obvious to non-car guys in terms of link numbers, but it begs these two important questions: What is a link and why does this kind of suspension need four of them?

The simple answer is links typically look like long rods and are usually attached at specific points on the rear axle of a vehicle to upgrade the performance of its stock suspension.  Upgraded performance usually focuses on the vehicle’s enhanced ability to bite down on the pavement under heavy acceleration because the four links absorb the axle’s torque and flex better than a stock suspension.

Four links perform well under stress, add more traction on both sides of the vehicle, and are popular in the hobby, but there are also three and five link suspensions available to car guys. The most important part of the equation is a link system is better than most stock suspensions when it comes to performance.

Our second car guy term in this ongoing series of car guy language interpretation is “understeer”, a term that may even be associated with 4-link suspensions since more bite on the rear end may lead to understeer.

Understeer is any road situation where the vehicle seems to plow into a turn and head roughly in a straight line-even though the vehicle’s front wheels are turned in the intended direction. The typical cause of this steering issue is a generous amount of speed combined with driver cockiness and/or several cocktails.

The opposite side of the coin is MyStarCollectorCar’s third car guy term, namely “oversteer”, a driving situation where a vehicle’s rear end cuts loose when it heads into a curve at warp drive. The front wheels may follow the right path in the curve, but the back end of the car may try to catch up to the front end of the car and the driver may now only be along for the ride on this merry-go-round.

The fourth addition to MyStarCollectorCar’s car guy language interpretation list is “numbers-matching”, a virtual Holy Grail vehicle if it is both rare and desirable. Numbers-matching means the factory equipment numbers match with the vehicle’s Vehicle Identification Number (VIN) production plate.

The most critical numbers are on the vehicle’s powertrain because they must match the vehicle’s production tags. Consequently, a vehicle that left the factory with a six-banger will have the production tags to indicate this fact, so a monster engine under its hood is not numbers-matching-unless the car is built around a transplanted factory (or fake) tag by conscience-free lowlifes in the hobby. Unfortunately, you cannot simply drop a transplanted Elephant Hemi on these bunko artists-or even the Slant Six originally found in the vintage ride.

A Continental kit is a good example of an automotive item from the past that is period correct, but not likely to be found on Fifties-era family sedans. Some high-end vehicles did leave the factory with versions of this iconic ornament, but it was rarely (if ever) found on the family chariot.

These days, a Continental kit is a period correct addition to many restored cars from the skinny Elvis years and really illustrates the idea that period correct items will always be a question of personal tastes for car guys.