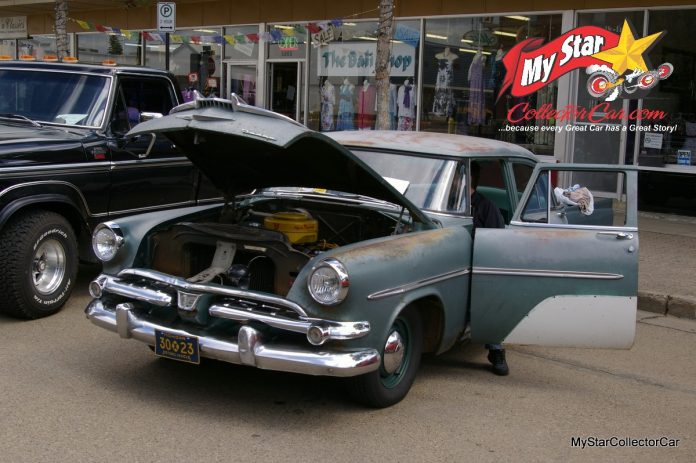 We discovered the MyStarCollectorCar version of lost tapes very recently when an MSCC article about a 2014 car show inadvertently turned up a forgotten car story.

A 1956 Dodge Crusader from the 2014 show was MyStarCollectorCar’s featured car in a recent “What’s-It?” puzzle and we realized the story about the ’56 Dodge was never included in our articles that year. Fingers of blame were pointed in several directions, but we decided to end the debate and right a serious wrong about a very cool car story that never saw the light of day.

Just for the record, a 1956 Dodge Crusader was a Canadian-built car that was only sold in Canada. The Crusader was essentially a base model Canadian Dodge that shared most of its DNA with the low-end Plymouth model in 1956, including its tail fins.

Canadian car builders sold many vehicles that joined at the hip in terms of style and engineering before the 1965 Auto Pact eventually merged the American and Canadian car markets. But in 1956, a Dodge with Plymouth style and tailfins was part of the Mopar family in Canada and became known as a “Plodge” (a word combination of Plymouth and Dodge) in car guy circles.

These days a Canadian Dodge from the Forward Look era (finned Mopars mainly from the 1950s) is a curiosity and conversation piece at any show because of their rarity, so a ’56 Dodge Crusader definitely got our attention seven years ago.

It’s true the story fell through the cracks and never saw the light of day on our pages, but a 1956 Dodge Crusader story is rare and timeless, so we decided to run it after we found the 2014 notebook about the car.

The owner was a colorful character by the name of Gabe Meszaros, a car guy who was clearly the right owner of the Dodge, given his outgoing personality. We looked at the notes about Gabe’s Dodge and recalled how he was able to entertain and educate us during the interview.

Gabe described his ‘56 Dodge purchase as the “start of his mid-life crisis” when he purchased it in January 2014. The car only had 38,704 miles on it when he purchased the Dodge, but Gabe was unafraid to drive the car after resurrecting it for the road.

The Dodge was original in almost every way, except for the tablecloth Gabe used for the headliner in his Dodge. He added his Dodge even had its original tailpipe at the time. Nevertheless, its current condition was a topic of debate in Gabe’s car circles because ½ wanted him to restore the Dodge while the other ½ wanted him to leave it “as is”, in Gabe’s words.

As mentioned, Gabe was fearless behind the wheel and had easily coaxed 75 mph out of his Dodge only a few months after he bought it in 2014. The Dodge was equipped with a 277 cubic-inch V-8 (also found in Canadian-built Plymouths) and a three-on-the-tree manual transmission, so 75 mph was within easy range for Gabe.

However, the car was basically an entry-level model, so the V-8 engine was the only luxury because Gabe’s car did not even have a radio.