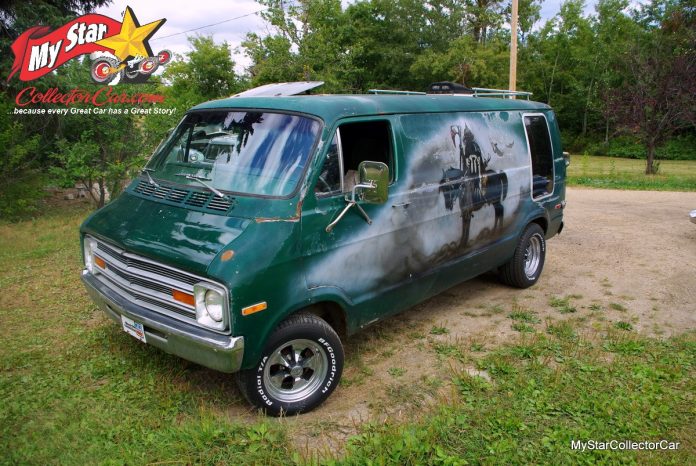 Kyle Clarke is a big fan of the graphic art found in publications like ‘Heavy Metal’, plus he has always admired the work of legendary artist Frank Frazetta, the man who drew the ‘Death Dealer’ character for a Molly Hatchet album cover.

He is also a Molly Hatchet fan.

Consequently, Kyle spotted a relic from the 1970s that caught his interest in a big way. The object of Kyle’s interest was a 1977 custom Dodge van that had a striking mural on its side in the form of the Death Dealer artistry found on the 1978 Molly Hatchet record album.

Frazetta never put the mural on the van, but it was a stunning tribute to his work done by a local mural artist, so Kyle was blown away by it when he initially saw it. Needless to say, he was very interested in the van and was prepared to save the mural on the custom van, even if it was a “mouse house” in his words.

A 70s-era vehicle parked since the early 2000s is typically flirting with disaster (to borrow from a Molly Hatchet song) when it comes to a mice problem. The little rodents wreak havoc on most vehicles stored on rural properties, but this ’77 Dodge van was spared that disaster during its years in banishment.

Kyle told MyStarCollectorCar the former owner sealed up the van and prevented the nasty little critters from entering the vehicle and forming Mouse Town (population 1 million and counting). As mentioned, the van was custom-built into a 1970s party on wheels and had plenty of building material for enterprising mice, but they were unable to enter the van.

The first order of business for Kyle was to track down the owner and buy the van. He was able to convince the previous owner to sell it, so Kyle became the proud owner of a custom van that celebrated the artistry of Frank Frazetta and southern rockers Molly Hatchet.

Kyle’s van had the right whistles and buzzers from the late 1970s, including a cassette player and lavish custom build in the rear quarters. The interior custom touches will look familiar to older car guys, particularly the built-in ice box and sound system that suggested the van was a party wagon in the finest tradition of the concept.

The Dodge van left the factory with a 360 cubic-inch engine equipped with a 2-barrel carburetor and automatic transmission that still deliver performance for Kyle. He added the ’77 Dodge van “drives pretty well and takes the bumps OK with the new pillows (tires)”.

The 1977 Dodge van may have been a party wagon after it was transformed into a custom ride during the late 1970s and given the menacing murals on its exterior, but these days Kyle uses it as a kid-hauler as part of its duties in his world.

In fact, he uses the van to shuttle his kids to school where it definitely stands out in a crowd of sport utility and crossover modern vehicles. The van’s Death Dealer mural is also something most onlookers do not see in a school drop-off area very often in 2021, but it was also not seen in the same family-rated situation back in ’77. Maybe at a bush party or beach-but not a grade school.