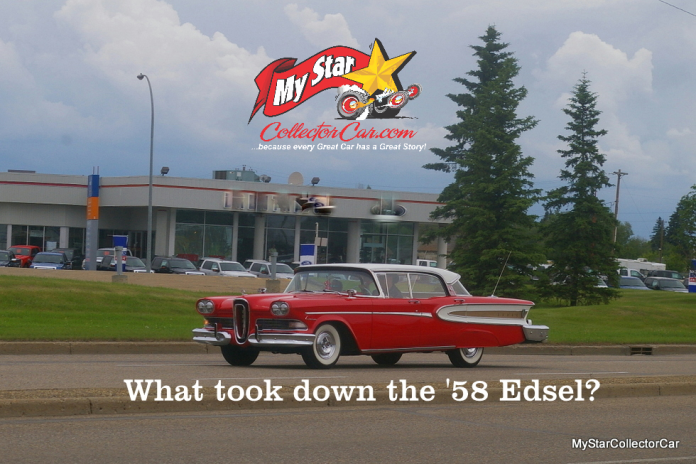 One of the most popular uses for the unpopular Edsel?

When the car became a sad punchline for car jokes.

Sadly, the ill-fated Edsel left the automotive scene with a whimper — along with a bang when the entire fleet crashed and burned (in the public’s eye) shortly after takeoff.

There have been many solid reasons put forth about why the Edsel failed so miserably with the buying public. Ford wanted to create a unique ‘tweener model that bridged the gap between their garden variety Ford models and the upper scale Mercury models-but ended up with a vehicle that was neither fish nor fowl in an automotive sense.

The low-end inaugural year (1958) Pacer and Ranger models were built with Ford foundations while the higher-end Citation and Corsair models used a larger Mercury platform.

The Edsel was pigeon-holed into a niche role as an alternative to Ford or Mercury models, a role that proved to be confusing to potential buyers who decided the Ford in their future did not have to be an Edsel.

Ford wanted its Edsel models to bring excitement and creative innovation to the newly reorganized public share automotive company. Unfortunately, the best ideas behind the Edsel were colossal failures, including its design features.

The car was a rolling disappointment from Day One because of its unusual design, particularly in the fore and aft department. The rear end of the ’58 Edsel was a strange blend of taillights along the top of the rear panels that was unique and jarring at the same time because of the massively bland sheet metal area under the rear lights.

Either way, the Edsel’s overall appearance was cause for concern for the Ford people because it was a tough sell at their dealerships-even with a major TV event entitled E Day that celebrated its arrival with a host of celebrities such as Frank Sinatra, Bob Hope and Bing Crosby, to name but a few.

The TV special did very well and prompted many people to visit the Ford dealerships. However, most of them left without an Edsel because they were not impressed with its style-to put it mildly.

Another nail in the Edsel’s coffin was its poor-quality builds and failed innovation like the faulty push button automatic transmission selector located in place of the horn button on the steering wheel. The Edsel garnered a reputation for unreliability and mechanical failure in a short period of time during a recession period (the late 1950s) when automotive build quality suffered because of a cash crunch.

The Edsel also failed to gain momentum when their marketing team decided to buy 1000 ponies as part of a giveaway promotion for the unpopular Ford. The idea was an abject failure with the public and the Ford dealerships were not happy when they became the sudden custodians of a herd of nags.

Eventually Ford put the ponies and the Edsel out to pasture after both ideas proved to be colossal failures.

MyStarCollectorCar sincerely hopes the horses had a happier ending than the car.