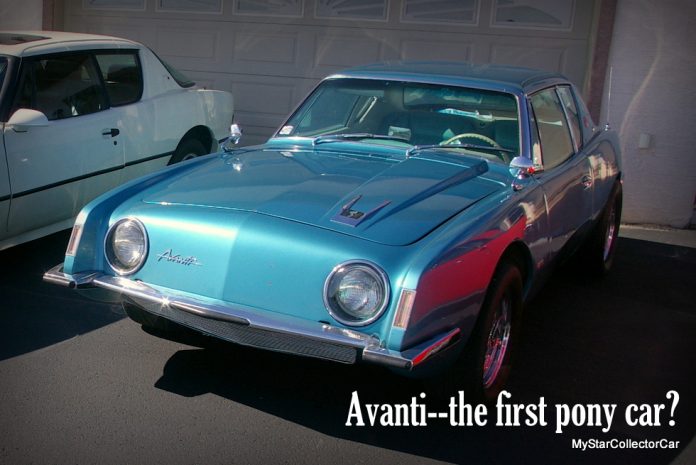 Few people of sound mind and even a room temperature IQ would dispute the fact the Ford Mustang was indeed the first pony car.

The legendary and sporty little model from the fine people at Ford created a sensation because of the Mustang’s stylish good looks in a small package.

However, we at MyStarCollectorCar need to ask this question: Was the Ford Mustang really the first pony car?

The pony car designation was likely accurate because the Mustang name could also be associated with a horse and Mustang was the first pony car in the strictest sense of the equine term. The Plymouth/Valiant Barracuda debuted shortly before the Ford Mustang in 1964 but was unable to create any major tidal waves in the same market as the Mustang. Otherwise we may well have the “fishy car” market instead of the “pony car” market back in the day.

However, a strong case could be made for another less familiar name when it came to the first pony car and that name would be the 1962 Studebaker Avanti. The little car company from South Bend, Indiana made a big splash with their ’62 Avanti and beat the Ford Mustang to the pony car market by two years.

The pony car design philosophy was based upon the short rear deck and long front end concept. Ford’s Mustang embraced this style design direction in a big way when it debuted as a 1964 model-more accurately a 1964 ½ model.

This same style direction was already a part of the Studebaker Avanti that was built two years earlier in 1962. Studebaker was a small player in the domestic car market and chose to stay within the limitations of their budget when it came to car production.

Even their trucks were largely built on their car platforms so the Studebaker brand could be extended to the domestic pickup market.

However, the Studebaker Avanti was a bold new direction for the frugal (by necessity) car company because it was a sporty four passenger coupe that was well ahead of the competition in terms of futuristic style.

The “four passengers” concept was a reach for both the Avanti and Mustang because the rear passenger compartment in the two cars was more like a chamber of horrors for the unfortunate people who were forced to travel any distance in the back seat.

The Avanti model was reputed to be the brainchild of then-new Studebaker president Sherwood Egbert who drew sketches of the car while on a plane in 1961. The design of the Avanti was massaged into reality by Studebaker’s team and was fast-tracked into production by 1962.

The Avanti body was built with fiberglass because it had a variety of difficult curves in its style and Studebaker was under a tight deadline to bring their iconic car to market. They were able to use the same fiberglass contractor as GM’s Corvette model and debuted the sporty and fast Avanti a full two (and a half) years before the legendary Ford Mustang.

However, the Studebaker Avanti was never able to match the Ford Mustang in terms of either popularity or sales impact and limped through two years as a part of hands-on Studebaker production.