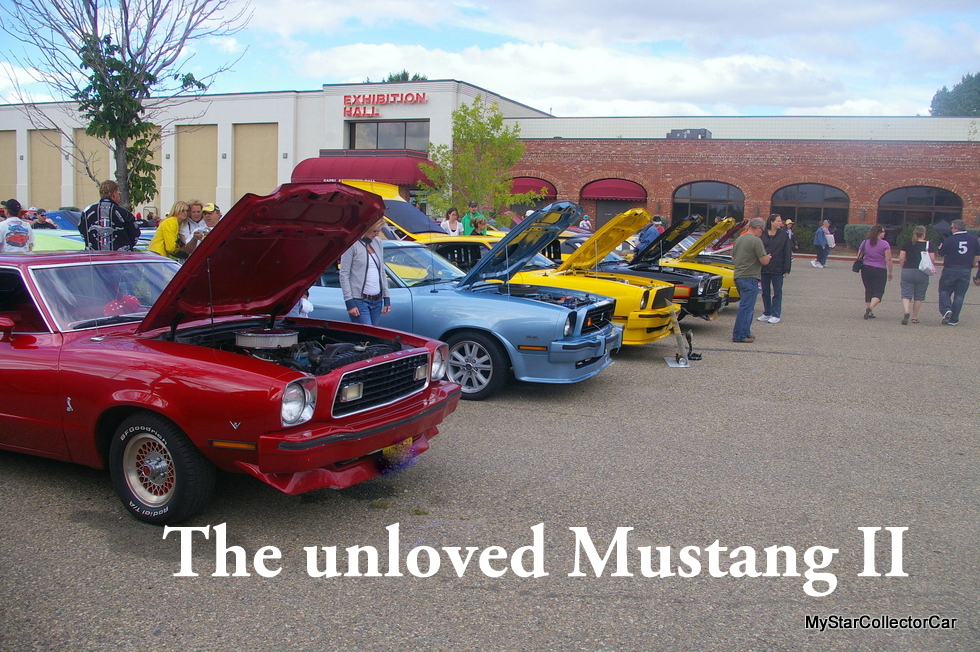 Most car guys look back on the early Mustang models and recall a golden era of raging horsepower and tire-melting performance from those legendary pony cars.

The first generation Mustangs giddy-upped their way to beasts of the street in a big hurry and made car guys forget this was initially a Ford Falcon in drag race mode.

The famous Ford small block V-8 cleared the path for monster big blocks under the hood of some factory Mustangs. 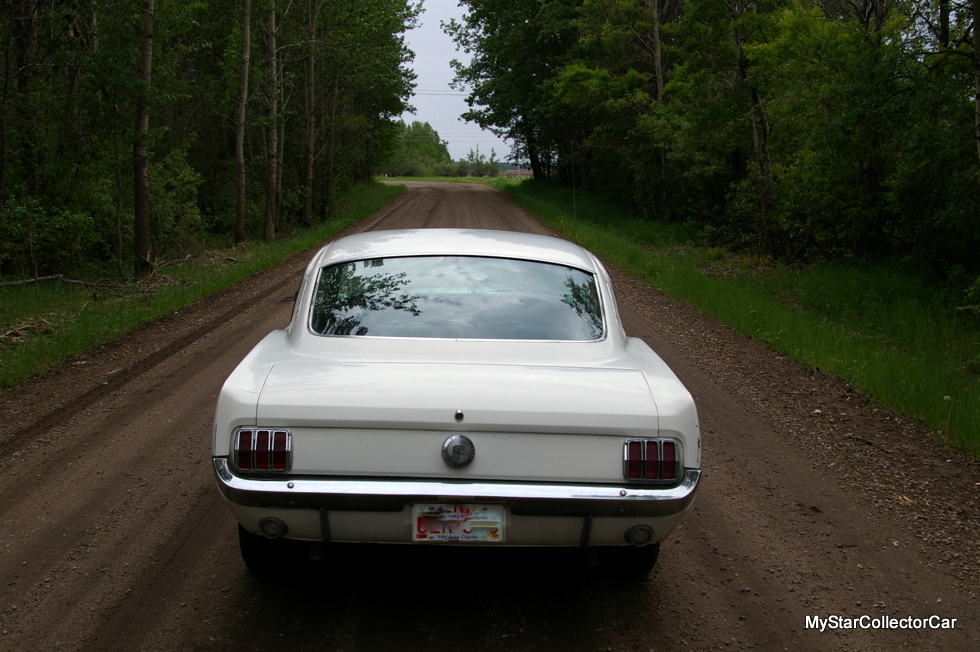 Shoe-horning a monster Ford engine into an early Mustang was no easy task, but the legendary pony cars’ very fortunate owners were rewarded with incredible straight ahead performance from the Motor City stallions. 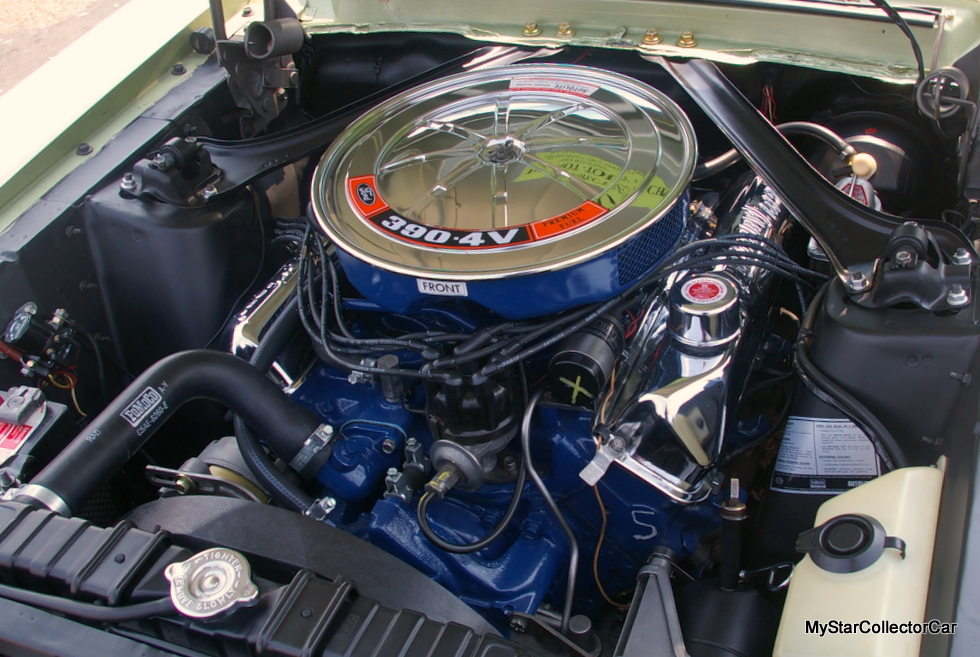 The Mustang was still a raging beast as the calendar switched from the late 1960s into the early 1970s but tough times lay ahead for the legendary car brands. A new decade (the Seventies) meant Ford wanted to design a car that reflected a new era. 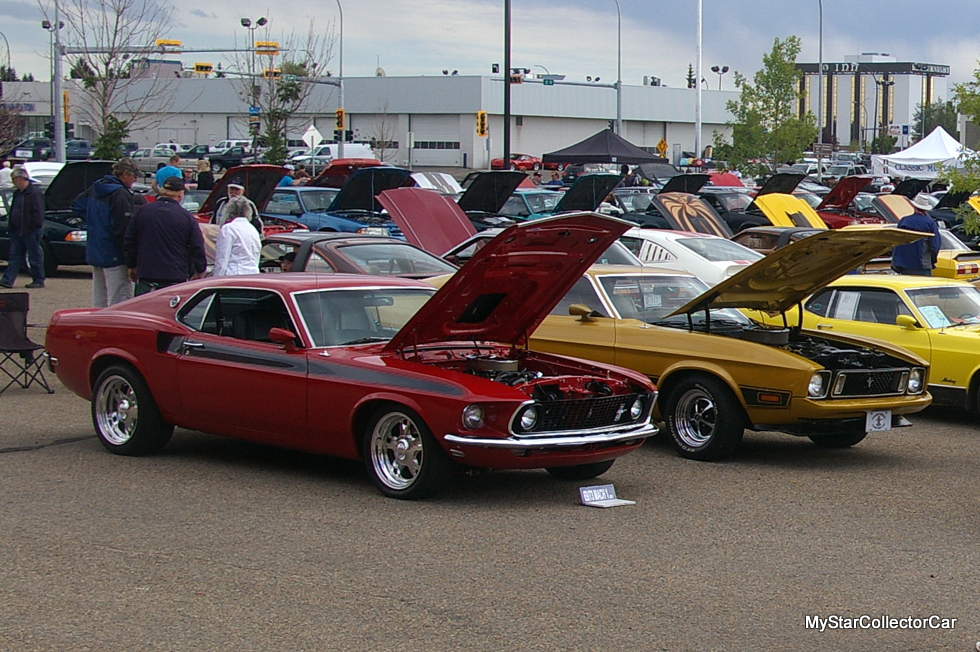 Ford placed its emphasis on style and comfort when it made the switch in 1971 and introduced a new- look car. Flat-out performance was still available in ’71, but the engines were throttled back a bit compared to their earlier Mustang counterparts because the US was rolling out tougher guidelines when it came to the automotive industry.

The issue came to a full boil when the 1973 Arab oil embargo forced the price of gasoline to sky-rocket in North America. The domestic car industry reacted by turning their V-8 models into a mere shadow of their former selves in terms of horsepower.

Consequently, the 1974 Mustang was a completely different car with a slightly different name. The brand-new-for-‘74 Mustang II was a complete departure from first generation Mustangs because it was smaller and only offered 4 and 6-cylinder engine choices. 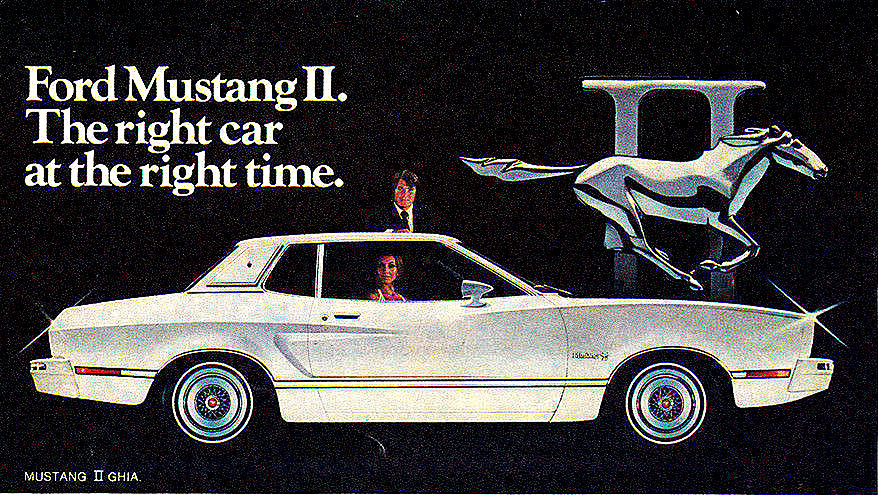 For many car guys, the Mustang II resembled a tarted-up Pinto with the same anemic street performance. For them, the Mustang II’s only saving grace was its superior MPG and most car guys were already living a nightmare of horrific gas pump prices and less emphasis on leaded high test gasoline. 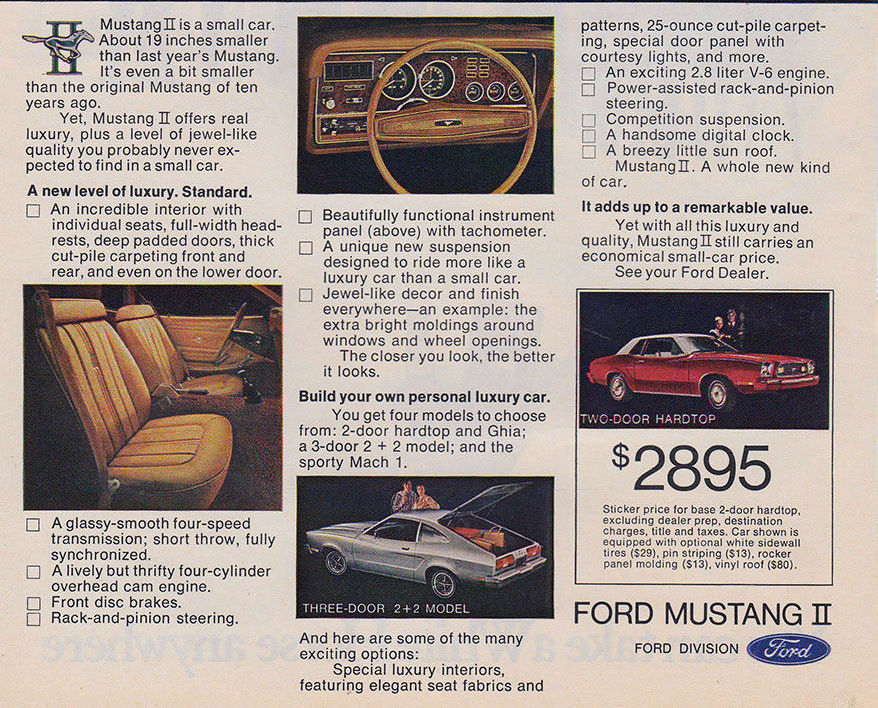 These guys were already suffering through the early days of disco music and now they had to witness the debut of a stallion (first gen Mustang) rebranded as a gelding (Mustang II). It was a dark time for car guys and the Mustang II was not the saving grace for these people. 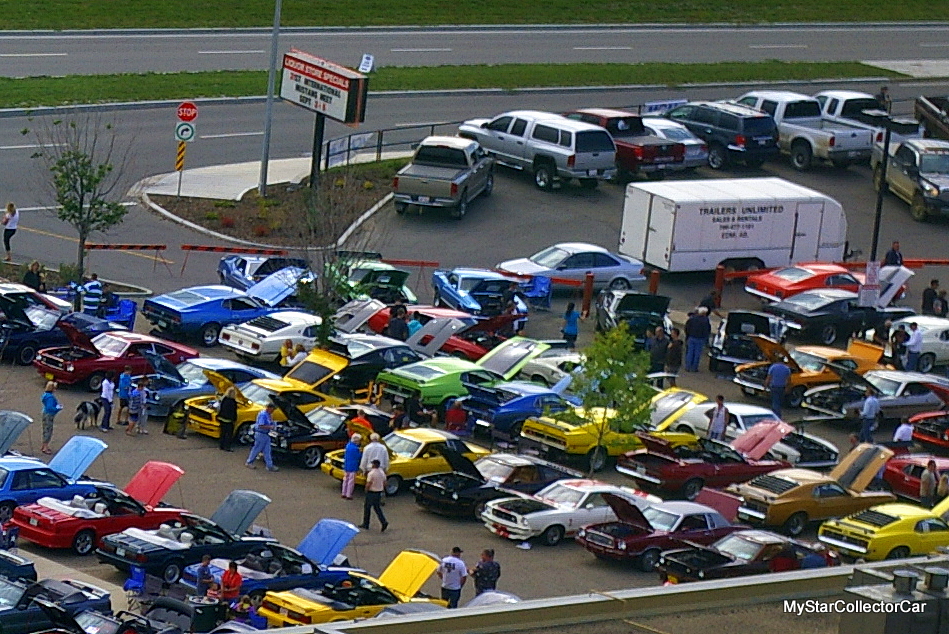 However, the introduction of the 1974 Mustang II was actually well-timed by Ford because many customer wanted a car that could handle the MPG race better than a street race. 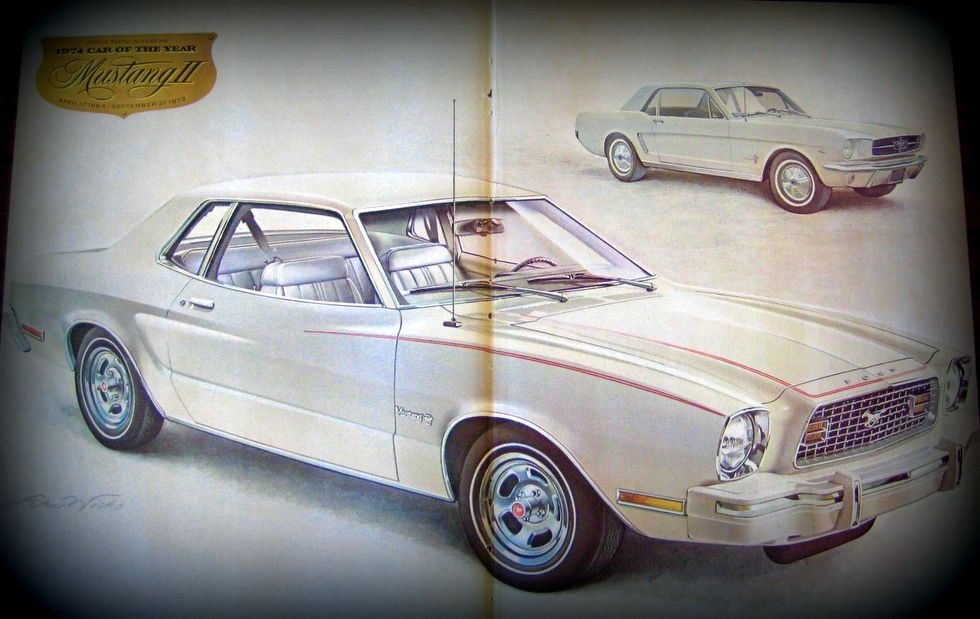 Nevertheless, Ford was still aware of the Mustang II’s performance roots and offered a 302 small block V-8 option for the car in subsequent years. 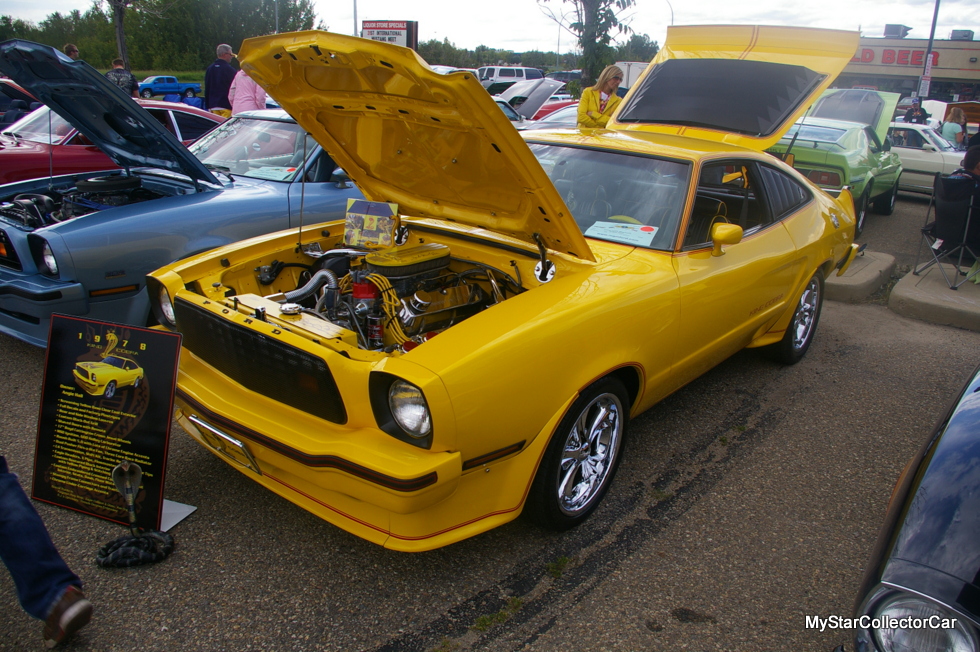 The Mustang II actually evolved into a very sporty model by the end of its production run in 1978. Air dams, handling packages and T-top options had transformed the Mustang II back into a street beast and it should have taken its place among the best of the mid-to-late 1970s performance models when car guys looked back at the cars from the Me Decade. 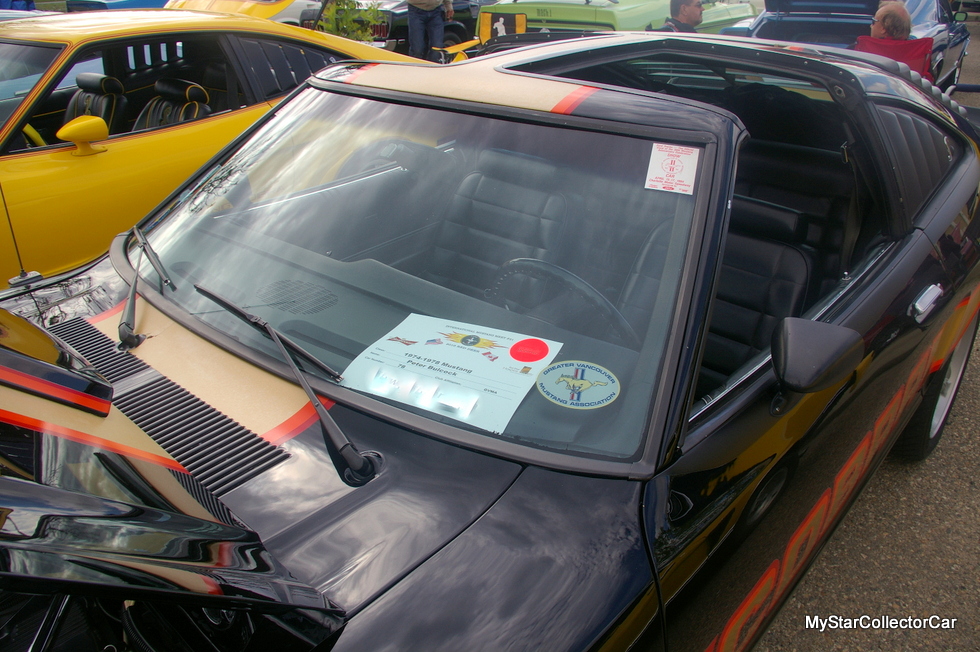 That ranking did not happen for the Mustang II in many car guy circles and the car ran at the same level of respect as late funny man Rodney Dangerfield. 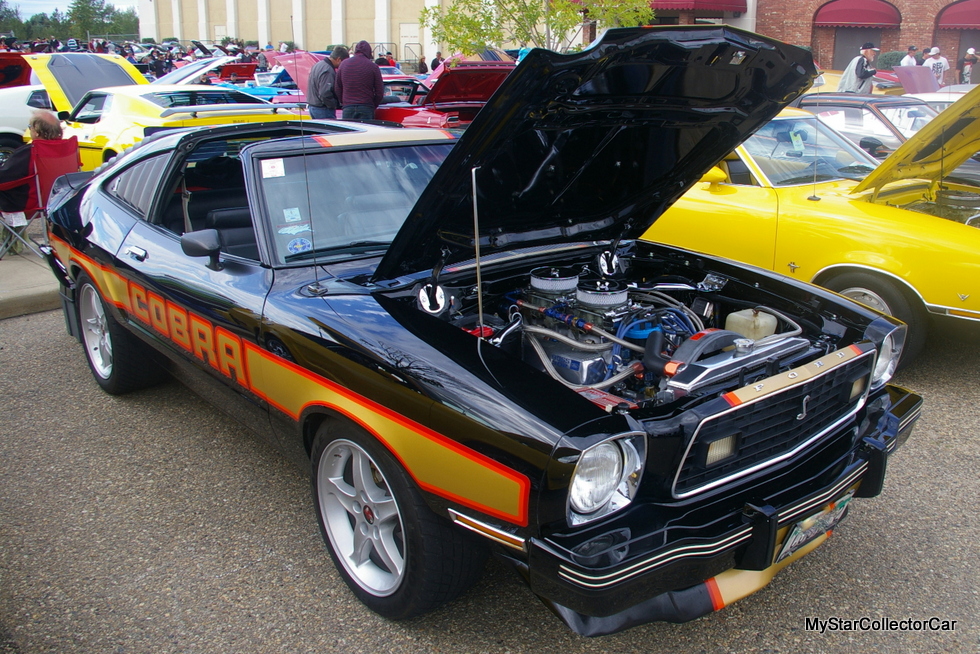 We at MyStarCollectorCar are big fans of Rodney Dangerfield and are also fans of the Mustang II because it evolved into something very special during its five year production run. In our opinion, the car earned its respect a long time ago-same as Rodney Dangerfield.