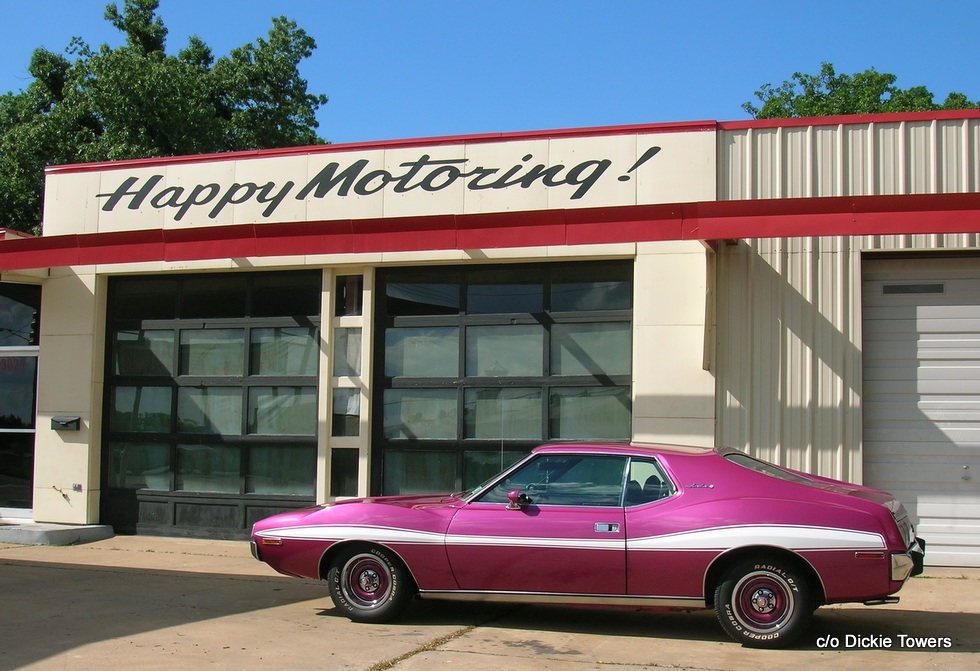 The best foundation of an MSCC car or truck story is the owner’s commitment to his or her old classic.

‘That’s why the first question in an interview is always the same: “Are you keeping it?”

That question was never asked this time because there is an off the charts level of commitment in this 1974 AMC Javelin. 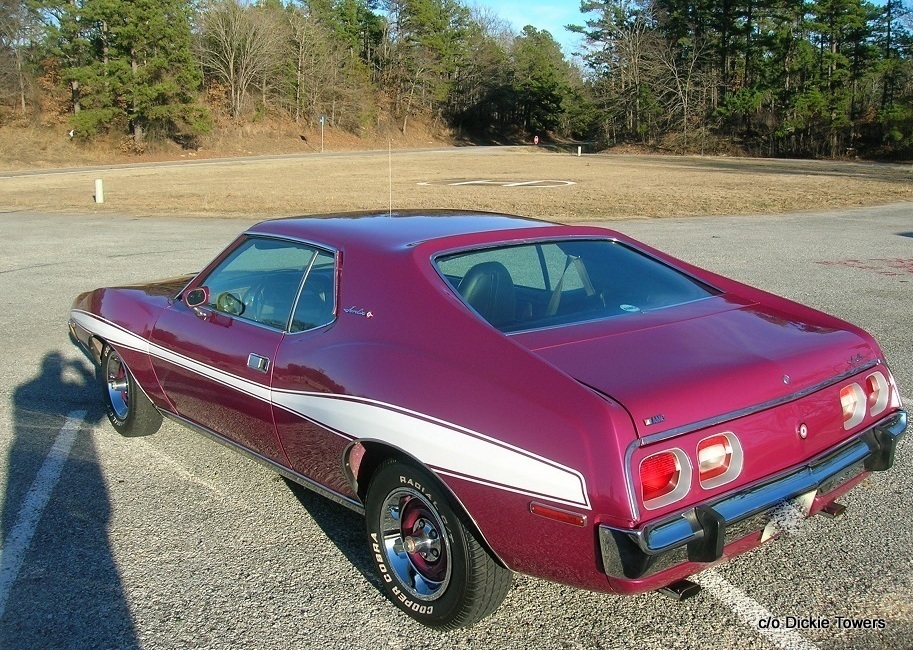 Dickie and Linda Towers are the proud owners of this unique car with an even more unique back story and they were happy to share its tale with MSCC readers. 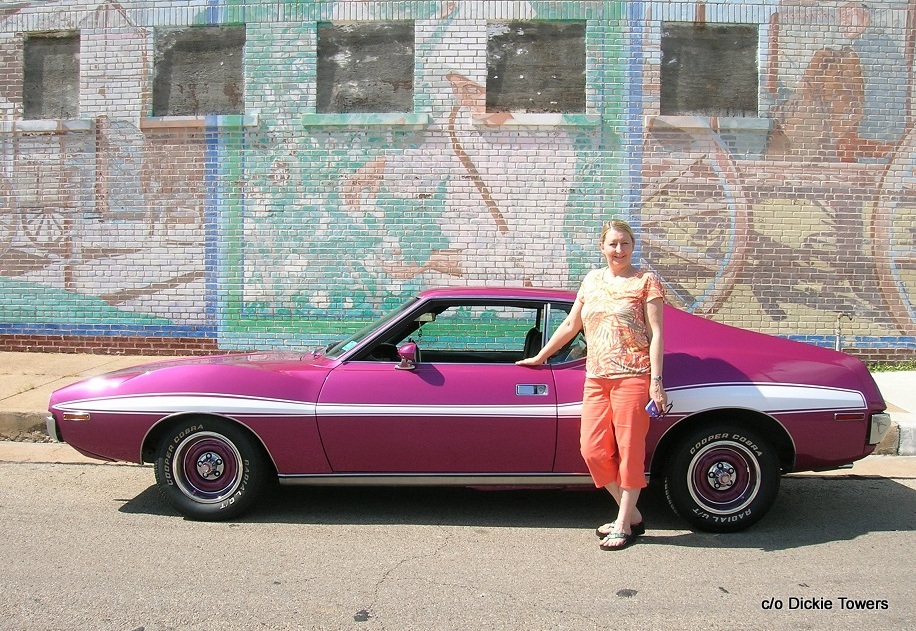 Dickie explained how the Javelin entered the family: “This is a brief recap of how my family became a part of the “AMC Family” and how the love for one particular automobile by my wife inspired her to hold onto the car for nearly 40 years and have the determination and dedication to dream that someday the Javelin would be restored to its youthful appearance and performance that had brought so much joy to her in the past. 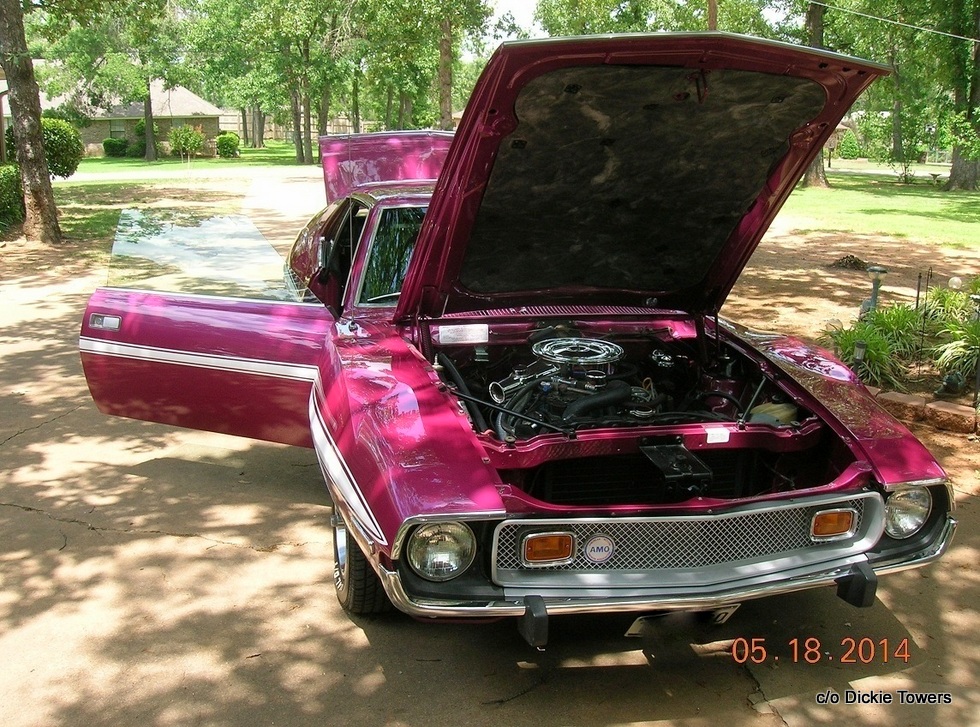 The Javelin had a family connection from the start: “The story of my wife, Linda Towers, and her 1974 Javelin actually began in April 1974, when my parents bought my younger sister, Debbie, a brand new 1974 Javelin for her 16th Birthday Linda fell in love with my sister’s Javelin, and wanted one herself. 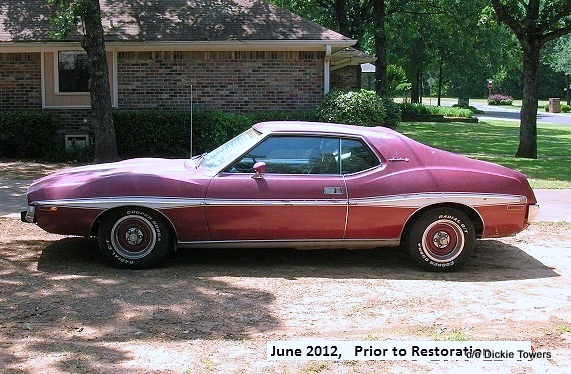 “So, on May 24, 1974, Linda and my mother, visited Hooker AMC, and Linda special ordered her new Javelin with the same options as my sister’s Javelin, except Linda wanted G-4 Plum exterior paint.  Linda loves anything related to the color purple. 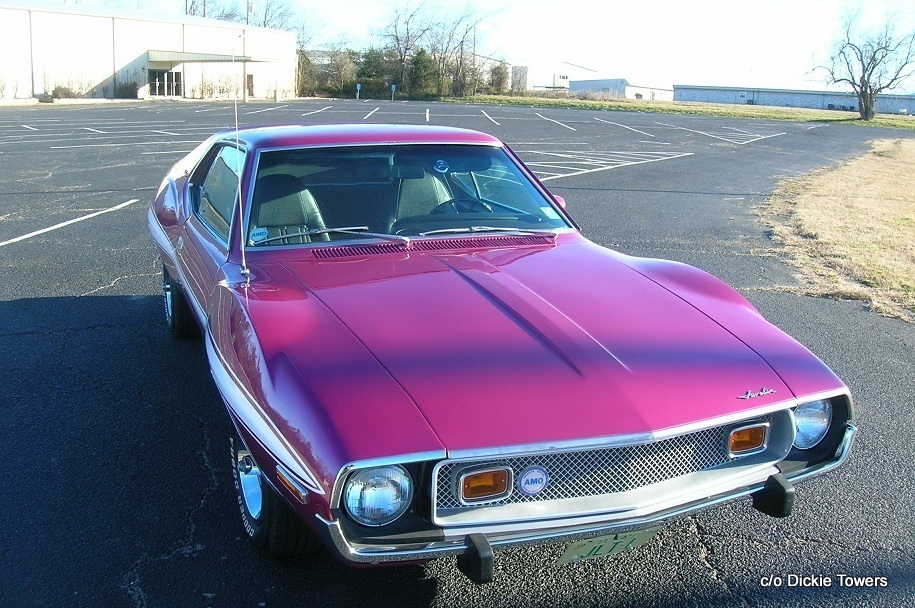 This car wasn’t for show—it had a working role in the Towers family: “From 1974 until 1998, Linda put 118K miles on the Javelin as a daily driver. In 1982, a massive tornado had struck Paris, Texas with little warning, and the Javelin was parked in our driveway, and was severely damaged on the top and passenger rear quarter. The insurance company considered the Javelin a total loss and wanted to scrap it, but Linda refused to concede that, and instead had the Javelin repaired and drove it for several more years”. 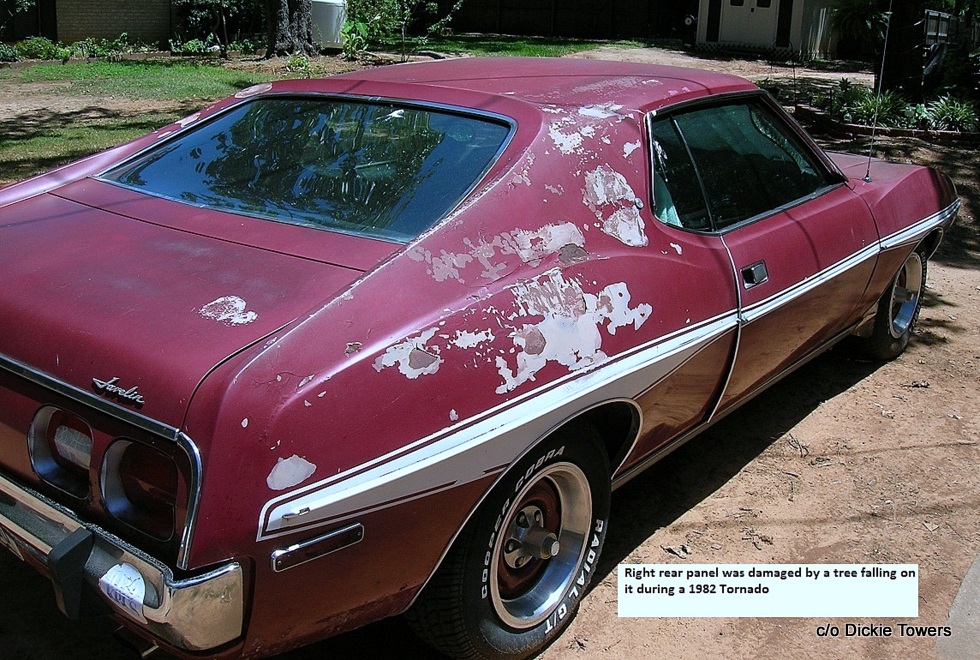 The car then went into semi-retirement: “In early 1998, we put the Javelin in storage, with the goal of having it restored someday”.

The years were kind but storage isn’t a car’s best friend: “In May, 2010, we decided it was time to get the Javelin out of storage, to assess what shape it was in, and drive it a little. After sitting idle for about 12 years, the automatic transmission would not operate, but a cleaning of the screen and new fluid, and it worked properly. Linda drove the Javelin on a limited basis for the next 2 years.” 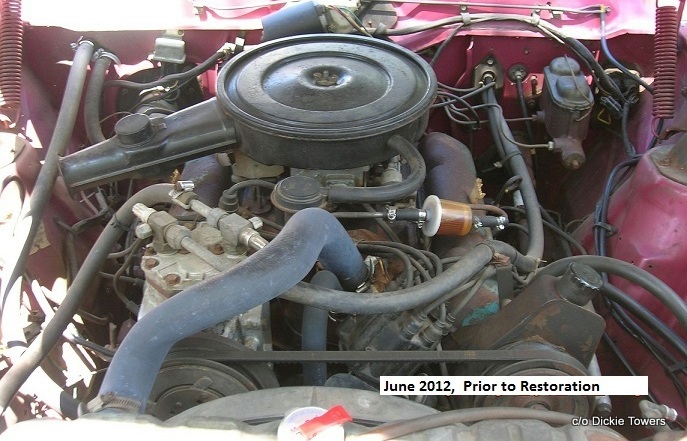 The next stage was the most dramatic one: “In July 2012, we decided it was time to get the Javelin restored, but we had no idea what was involved. Linda was not interested in making the Javelin a Concourse Rotisserie Level Show Car, she just wanted it restored so she could drive it and enjoy it, as she had in the past”.

Projects can be a minefield: “Like most folks, we got a few bids on the restoration work, and took the lowest bid….Big, Big Mistake”. 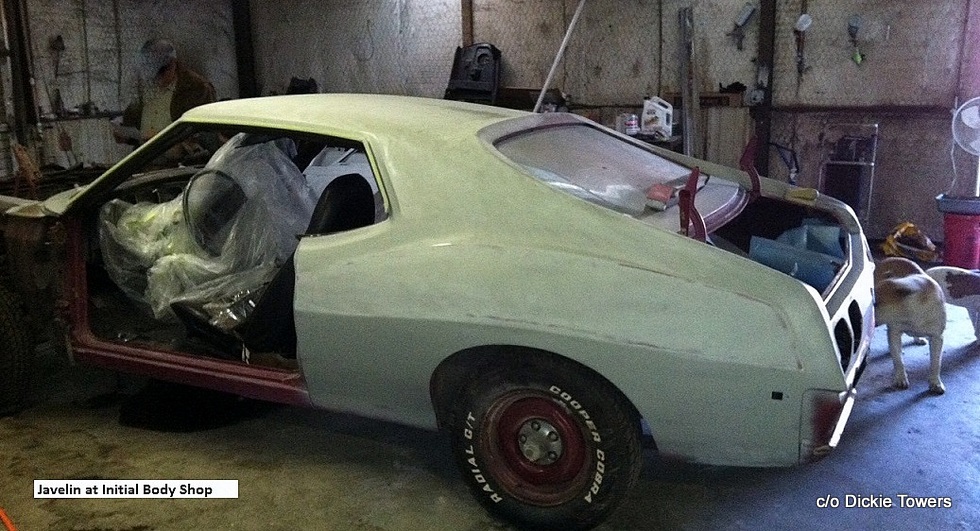 The decision to move on came over time: “For several months, we believe them, but finally, in June 2013, after the Javelin had been at this body shop about 11 months, and no work was being done, we knew we had to take the Javelin somewhere else, and we were lucky enough to found another local man that agreed to restore the Javelin”. 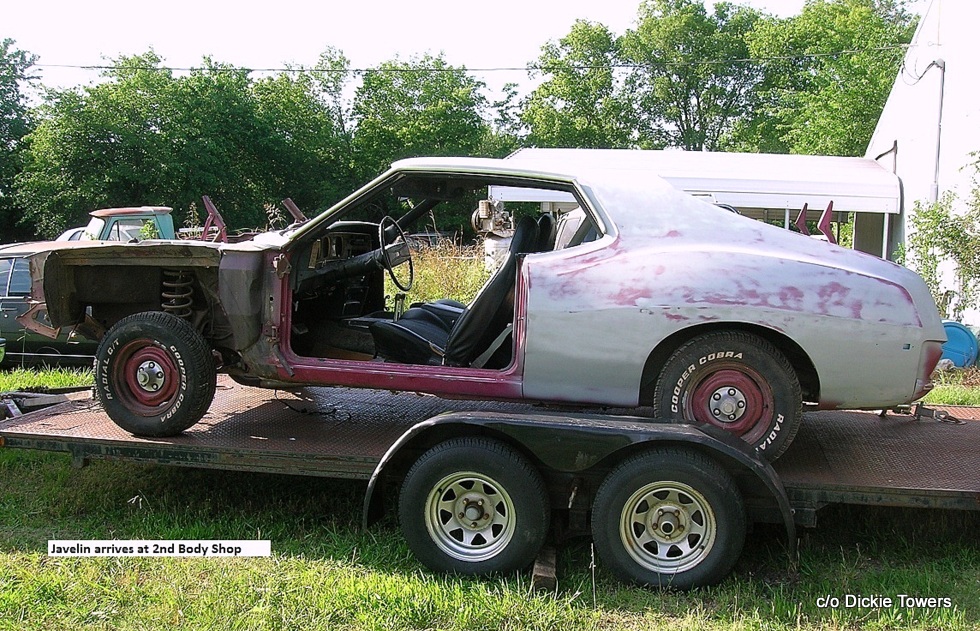 Unfortunately, there was a lot of collateral damage from the first shop: “When we picked up the Javelin from the initial body shop, it was in 1000 pieces, like a jig-saw puzzle, nothing labeled or categorized, parts thrown everywhere, bolts/nuts just piled in floorboard, chrome trim pieces and misc. parts thrown in the trunk, even the radiator was laying in the back seat, still with antifreeze in it. The initial body shop had let their kids play in the Javelin and they broke several items: front windshield, steering wheel, dome light lens, sail panel, turn signal lever, etc.” 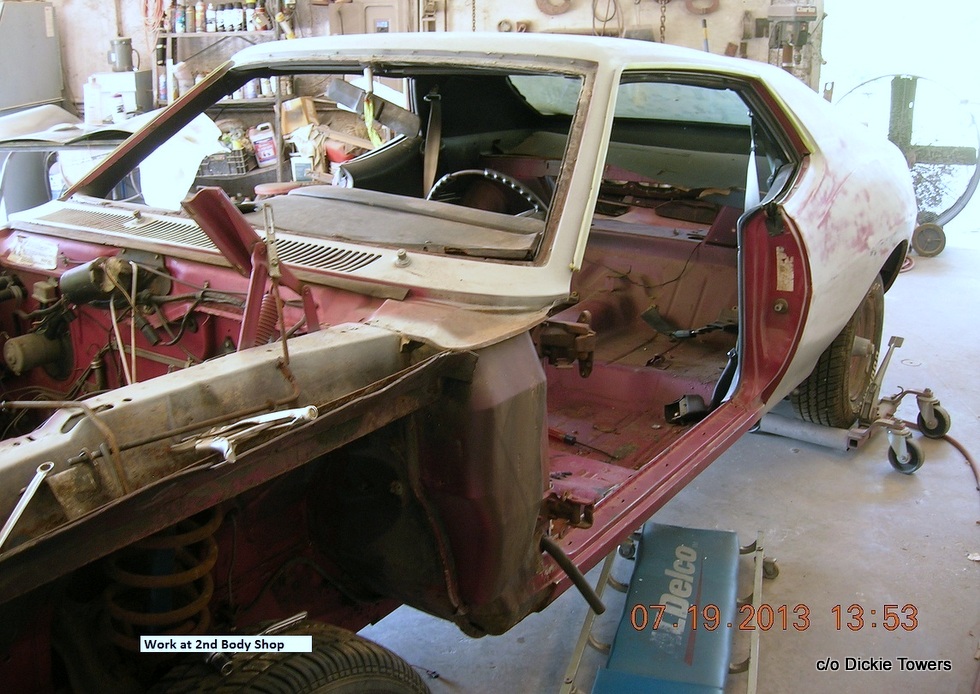 There was more indignity: “To top it off, the body shop even had large dogs in the shop at night, and they urinated on the Javelin’s wheels, causing them to rust. Linda actually started to cry when she saw how her baby had been treated. Overall, the experience with the initial body shop was a complete nightmare, and a valuable lesson learned.” 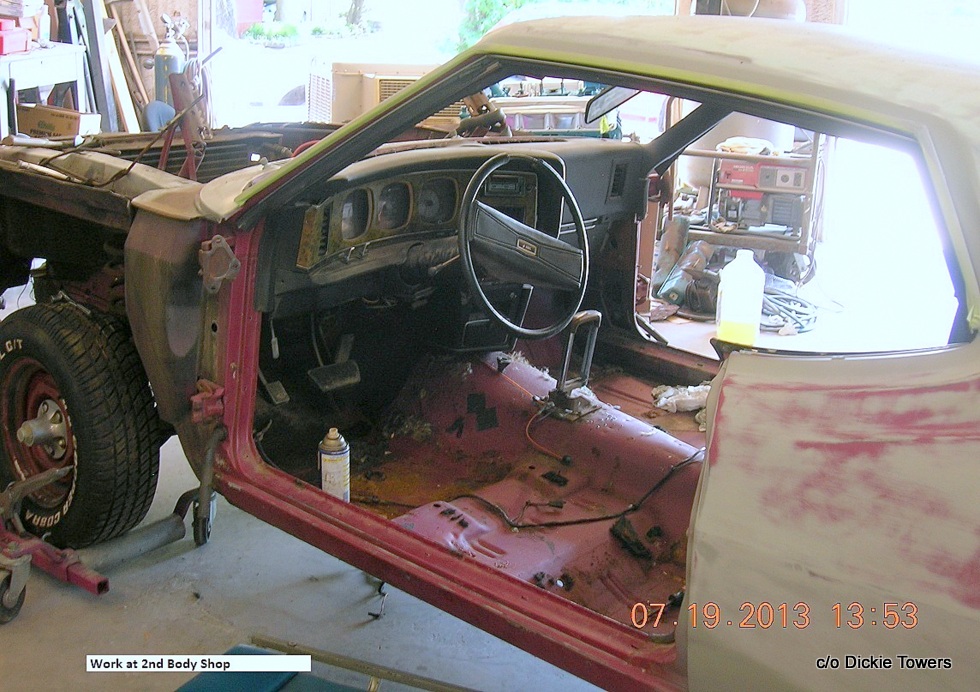 The hero in the story was clear at this point: “Most restoration shops probably would have walked away from the project, considering the mess and disarray the Javelin was in, but to his credit, Mr. Gary Armstrong, of Reno, Texas, agreed to complete the restoration. Mr. Armstrong had previously owned/operated a Corvette Restoration Business in Wylie, Texas for many years, and this was his “First” experience in restoring a Javelin, or any AMC vehicle, so he was unfamiliar with sources for parts, etc. I agreed to supply all parts as needed. I bought a complete Technical Service Manual (TSM) for him to use.”

The process fired up again but there more surprises: “In mid-July 2013, work again was started on the Javelin, at Mr. Armstrong’s Shop. Along the way there were several bumps in the road, one being that the initial body shop had supposed to have rebuilt the engine, and we took them at their word, but after Gary installed the engine and primed everything, there was no oil pressure and a very loud noise coming from the lower engine area. In order to find out exactly what was wrong, Gary had to remove the engine and tear it completely down. When he tore the engine down, he discovered that the initial body shop had rebuilt the engine, but did not order the correct size main and rod bearings, and there was excessive slack in the rods, this was the reason the engine would not pump up any oil pressure. So a new crankshaft and matching bearing kit had to be ordered, the engine was rebuilt, installed, and oil pressure was correct. This was just one of “Many” things the initial body shop had done in a non-professional way”. 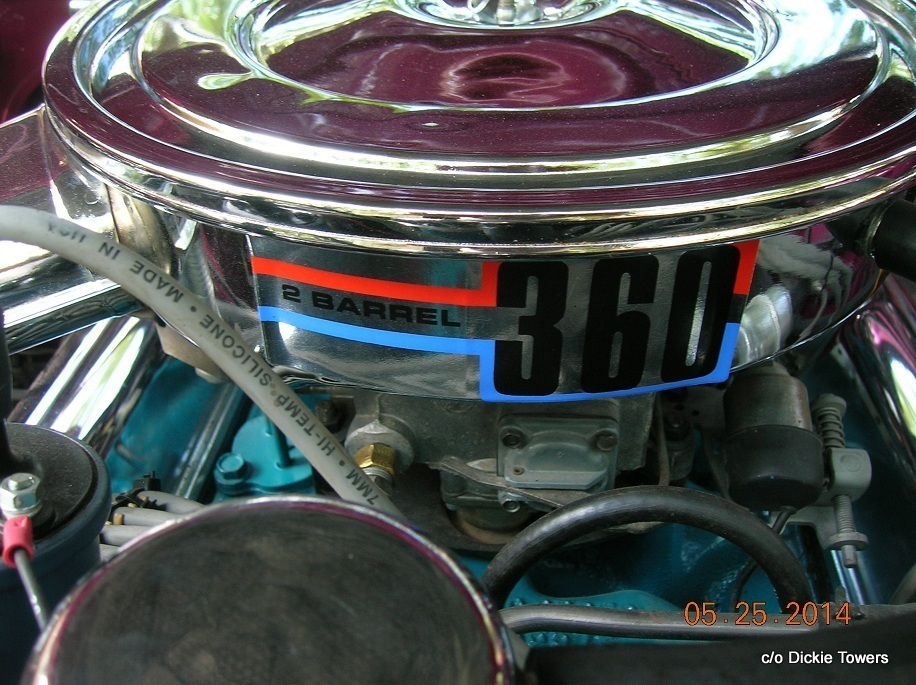 The final product was outstanding: “The Javelin was basically put back as original equipped from the factory, using Original Equipment Manufacturer (OEM) and New Old Stock (NOS) parts.Linda did want a few items on the engine chromed (air cleaner and valve covers) and she also wanted the wheels painted to match the color of the Javelin. Also, the exhaust was changed from a single pipe to a dual exhaust system, still utilizing the factory free-flow manifolds. The original Motorola Multiplex AM Radio w/8-Track Stereo Player was refurbished.** The original 40 year old Goodyear F70-14 RWL Polyglas spare tire is still in the trunk and has never been used. All original data plates/tags on components are still attached. 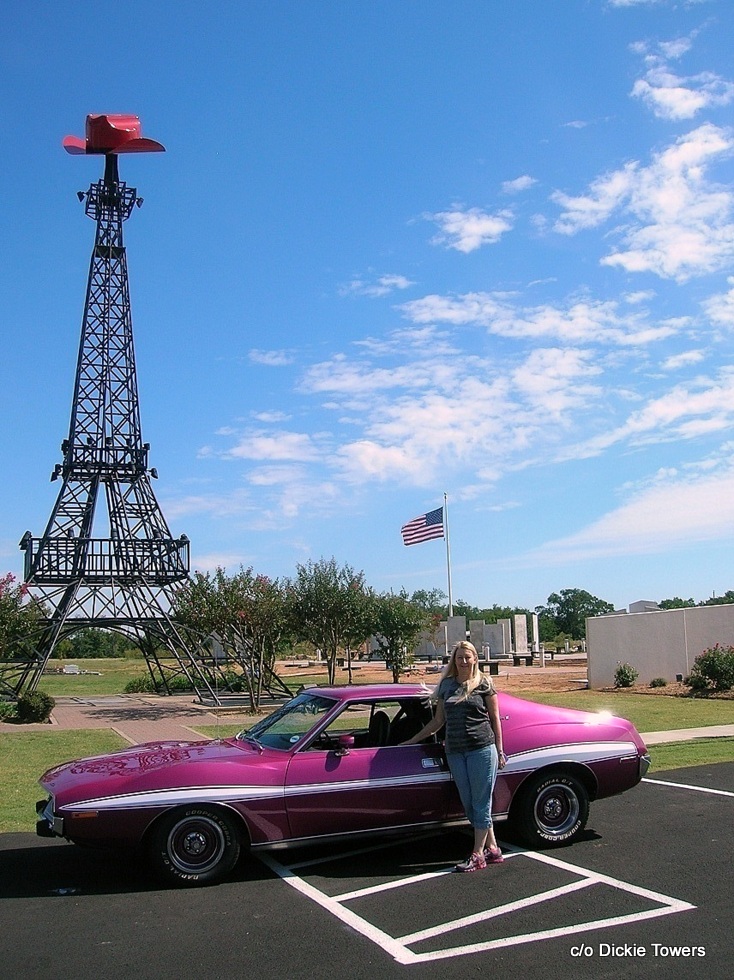 Dickie outlined his wife’s paper trail: “Linda’s Provenance of Ownership is that she is the owner of this 1974 Javelin since new, has all original dealership provided documentation, Window Sticker, Car Build Order, Warranty Card and Service Pamphlets. 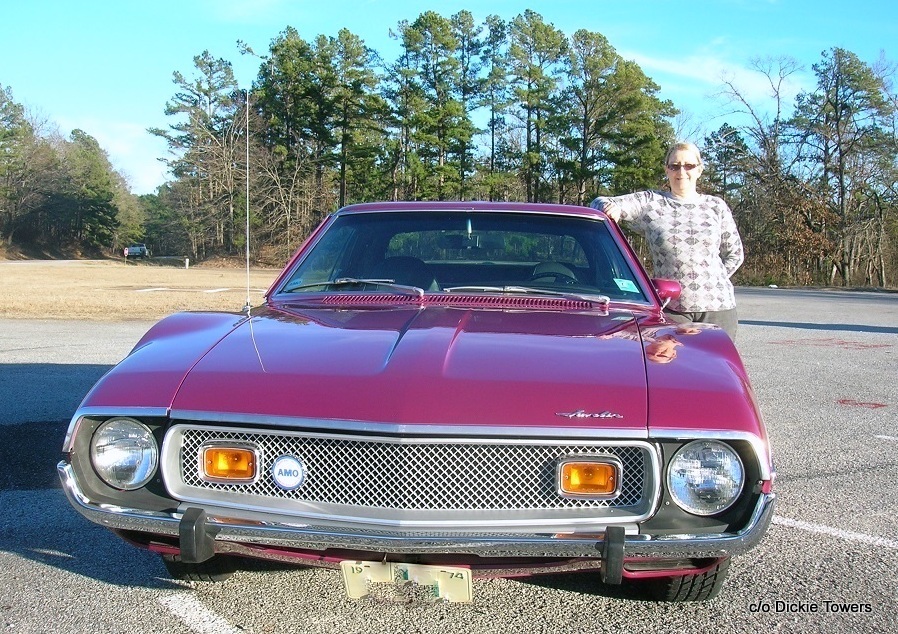 He was philosophical about the ups and down in the process: “The restoration project took nearly 2 years, and overall we spent about 3 times what our initial budget had intended for this restoration.”

The ends justified the means: “But, that “tear” that I saw in my Linda’s eye’s when she was handed the keys to her restored Javelin on 16, May 2014, by Gary Armstrong was priceless.” 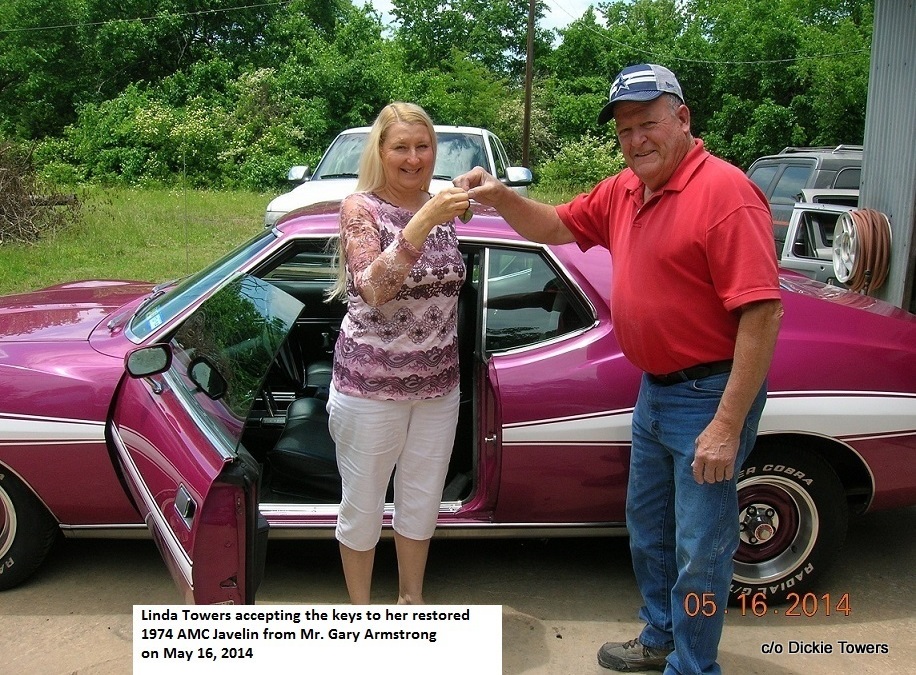 The future is clear for this ’74 Javelin: “Linda plans to enjoy the Javelin for many more years, then keep it in the family by passing it on to our daughter, Nicole.” 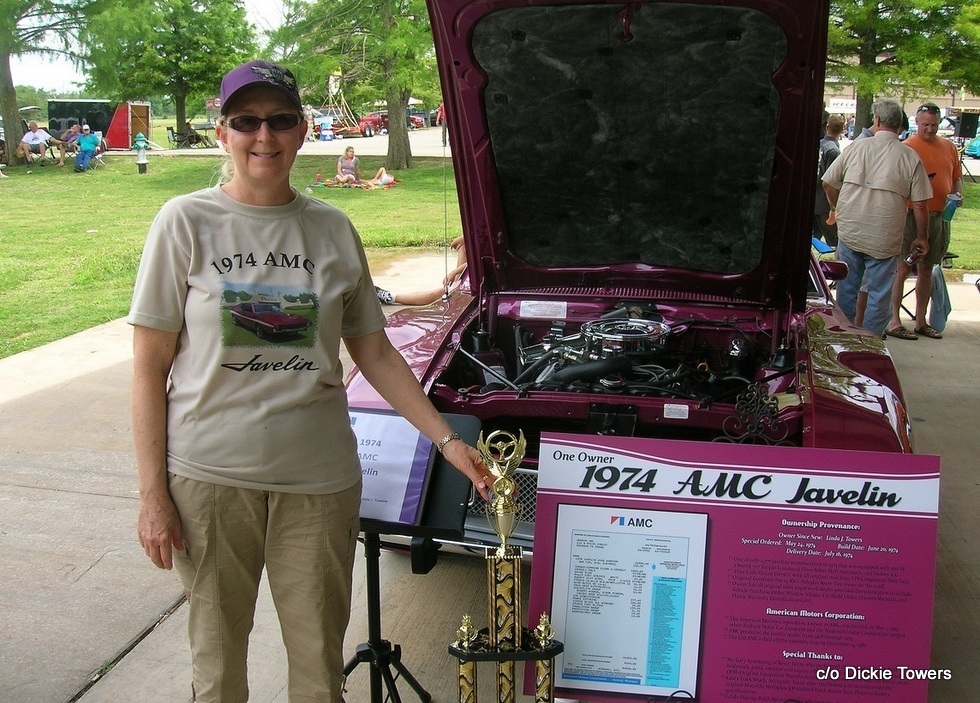 The real commitment is seen in Dickie’s final thoughts:

“In closing, I can honestly say that this restoration of a piece of AMC History would have never occurred without the persistence and dedication of my wife, Linda, and her sentimental love for this car, and I personally feel that this story needs to be told, to provide an inspiration to others interested in keeping the AMC Hobby alive.”