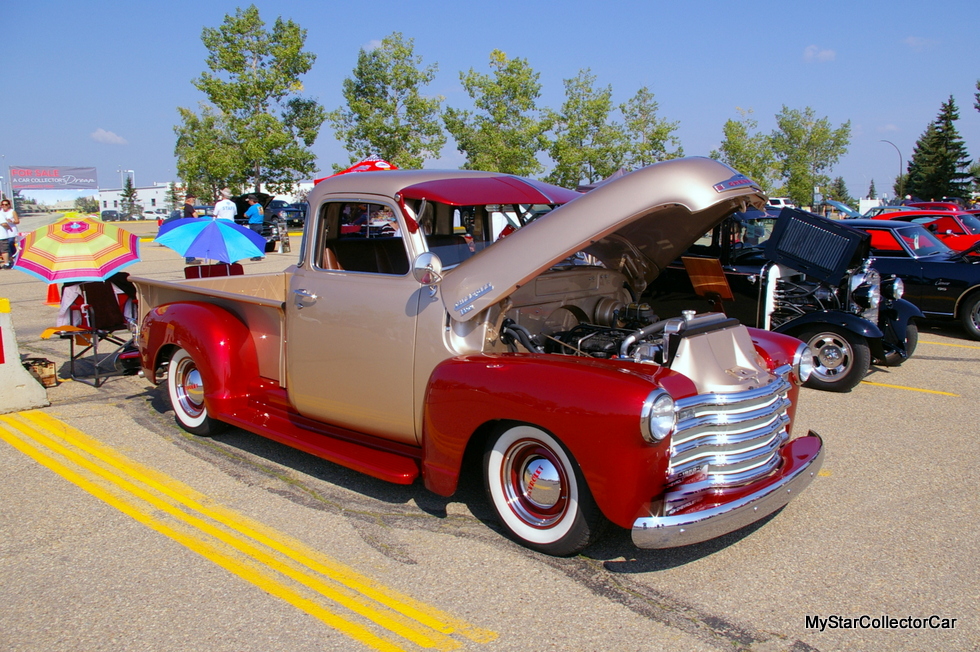 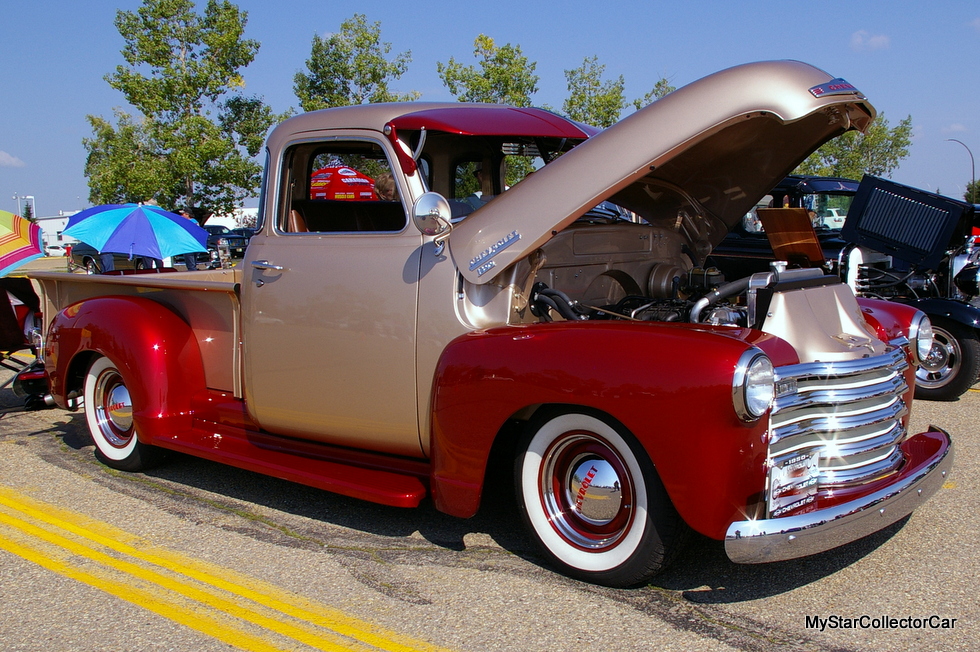 A 1950 Chevrolet 1300 ½ ton truck is not a major typo here on the MyStarCollectorCar website.

The 1300 was built for the Canadian market and is the Canuck counterpart to the Chevy 3100 pickup truck built for the American market during that same time frame. 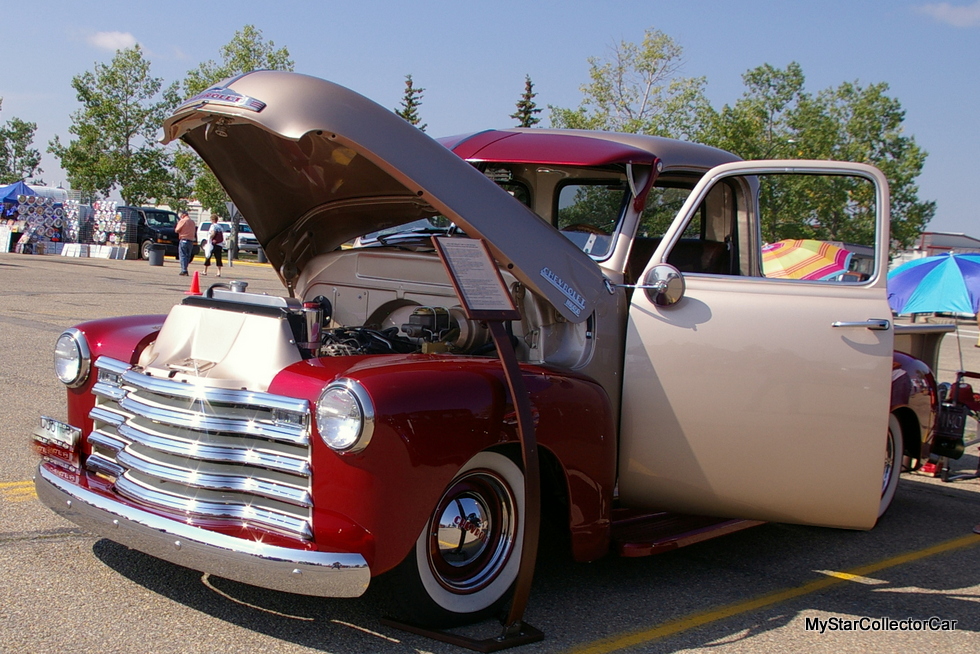 Ted and Sandy Dash are the proud owners of a 1950 Chevy 1300 ½ ton that Sandy named ‘Baby’ after it was restored into one of the coolest resto-mod Canuck trucks MyStarCollectorCar has ever showcased on our website/ezine. 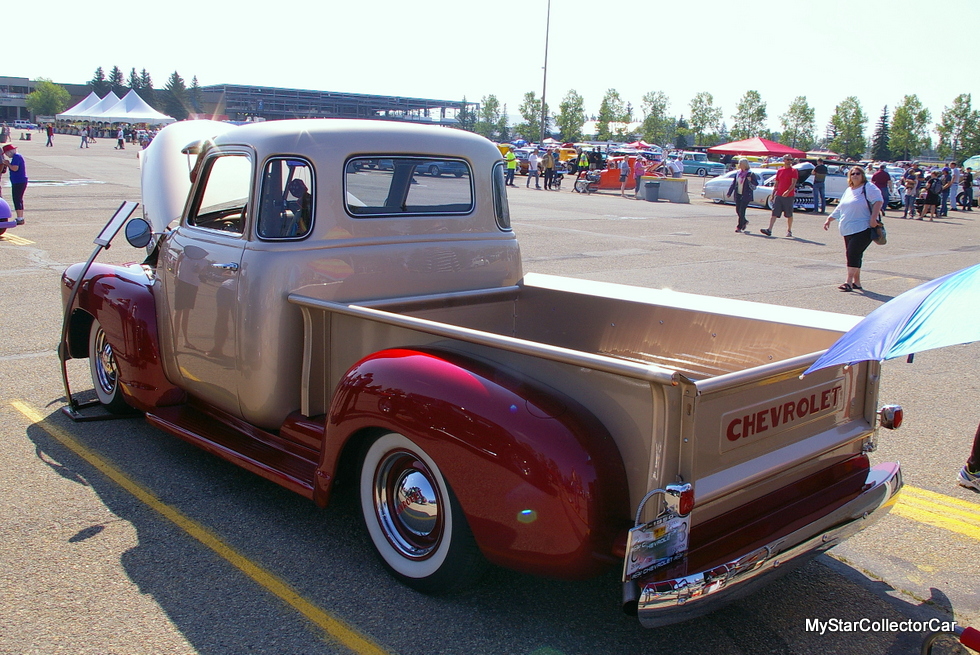 The truck was essentially a basket case when they found it only a few blocks away from their home. Ted is a talented car guy who viewed the project as a challenge and wanted to add his own custom touches to the restoration process. 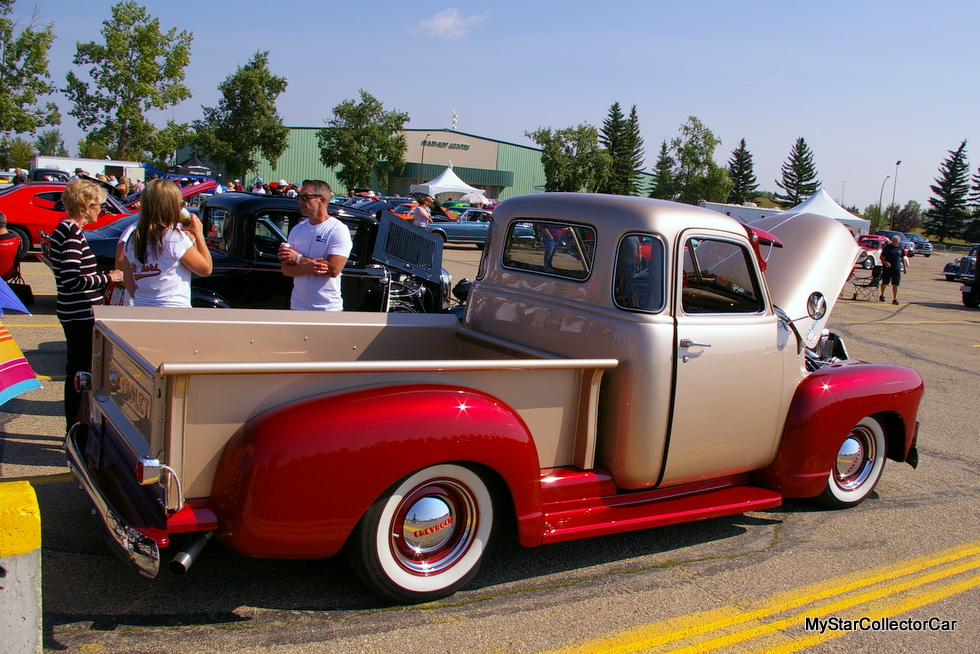 The original frame on the truck was beyond repair and needed a priest to perform last rites more than it needed to be included in the project. Ted was able to locate a replacement frame and a partially-prepared cab for his 69-year-old Chevy truck.

The Chevy truck has been beefed-up in a number of ways, including a powertrain donated by a Silverado truck. The ’50 Chevy pickup now sports a 4.8 liter GM engine bolted up to a 4L60E  4-Speed automatic transmission courtesy the Silverado. 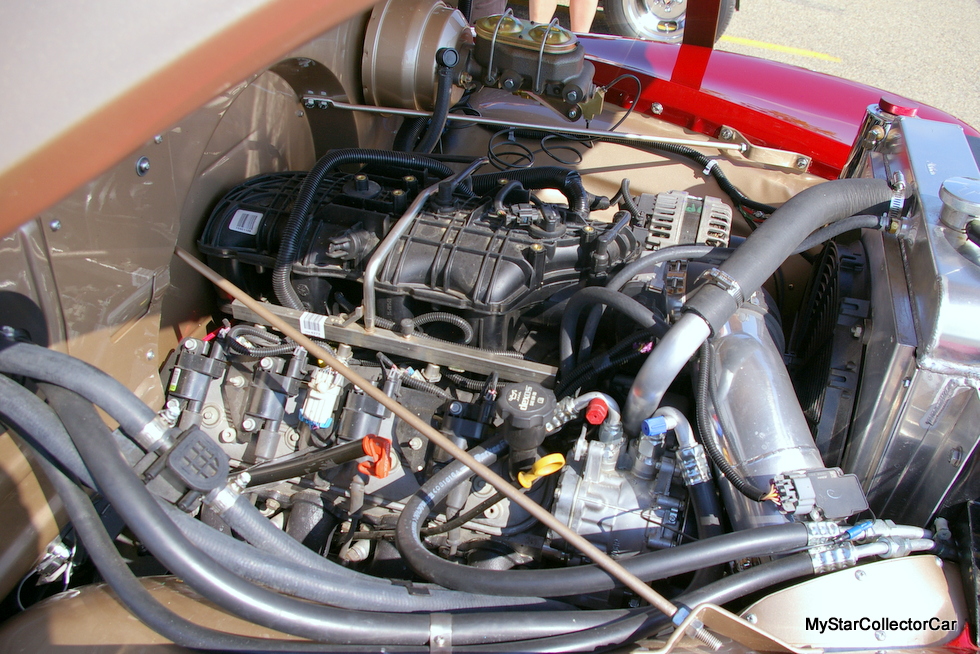 Ted is a gifted automotive technician who was able to apply his skills to this difficult project. He is also a practical man who went old school and was able to use modern donor vehicles to achieve his resto mod goals.

The 8.8” locker rear end was originally part of a 1995 Mustang and already had discs on it when Ted grafted it onto the rear of his Chevy truck. The seat was originally found in a 2005 Tacoma and was modified to fit the Chevy. 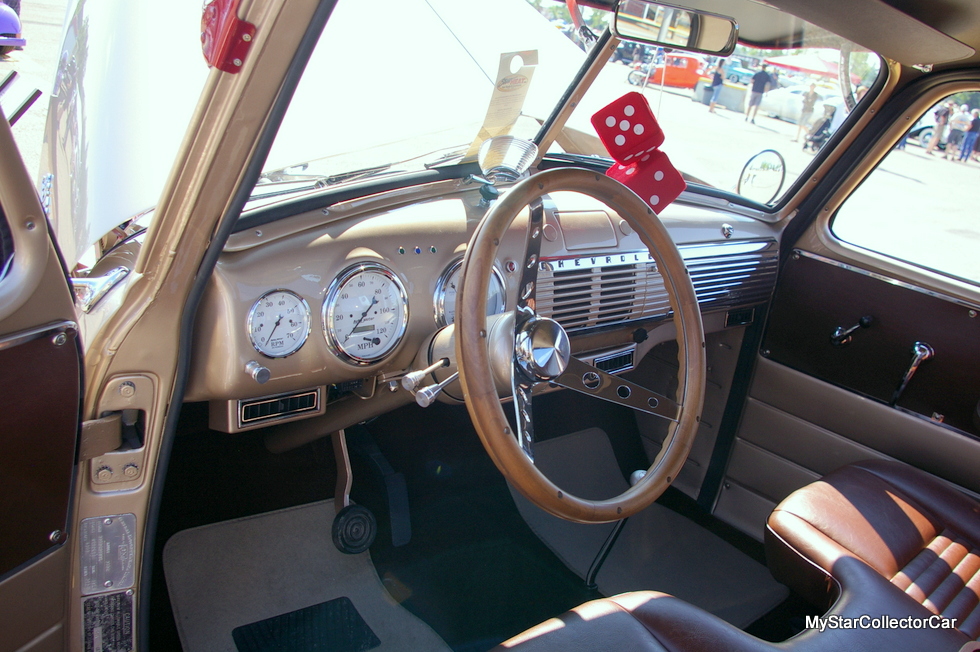 However, the windshield visor is pure Chevy and was donated by an old truck parked on Ted’s cousin’s farm.

Ted added a few aftermarket components that include a shift and emergency brake system, a tilt steering column, a custom steering wheel, an air conditioning unit, and a power steering system. 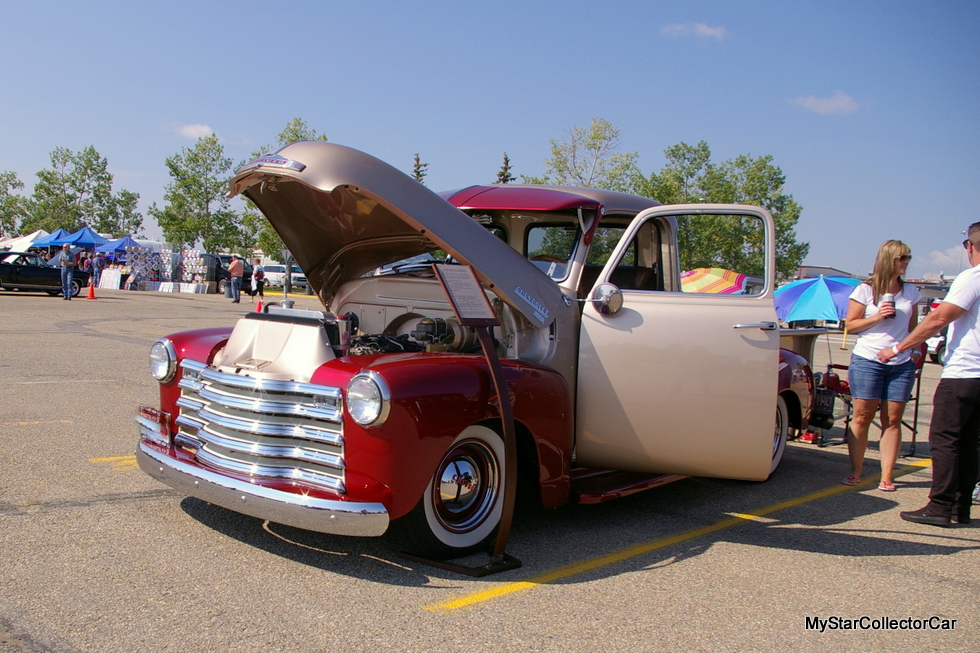 He moved the gas tank to the rear frame of the truck and lowered it “a little bit”, in Ted’s words. The custom two-tone paint scheme was actually inspired by a coffee bag color and is now a great look for the ’50 Chevy.

Female onlookers loved the custom paint job on the truck and we assumed Sandy was the creative force behind the two color choices. However, Sandy wanted MyStarCollectorCar to know that she and Ted consulted each other on the paint scheme after Ted noticed the colors on the coffee bag and Sandy agreed with his belief the two colors would work very on the truck. Both people were right because the truck has a very stylish paint job that places this Chevy well ahead of the pack in the custom two tone color department. 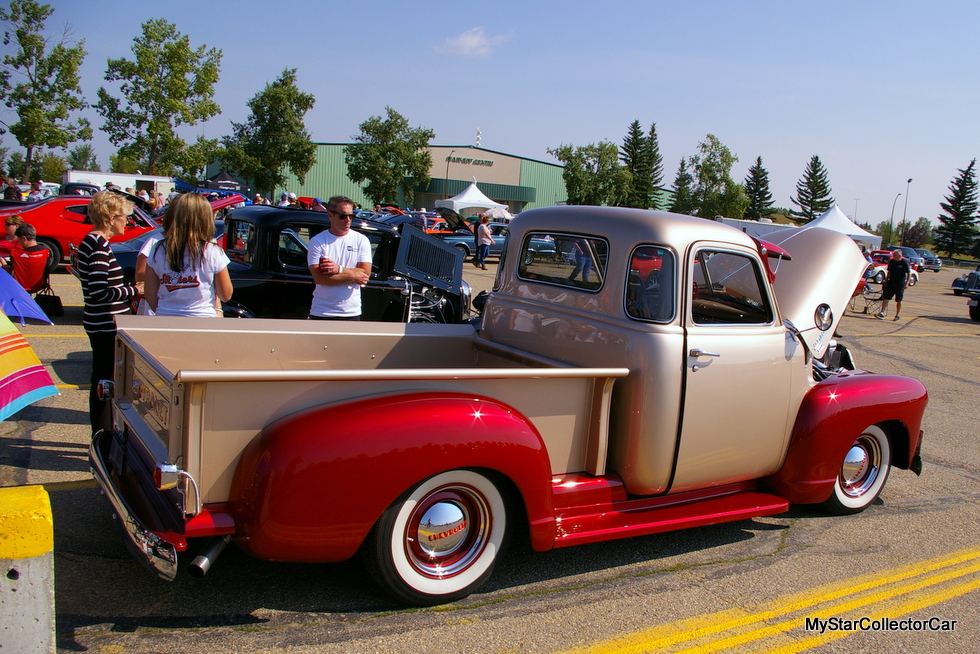 The 1950 Chevy 1300 project took about three years and was ready for the road by April 23, 2018. Ted and Sandy wanted to enjoy the truck and had already put about 1000 miles on the truck in the first few months. 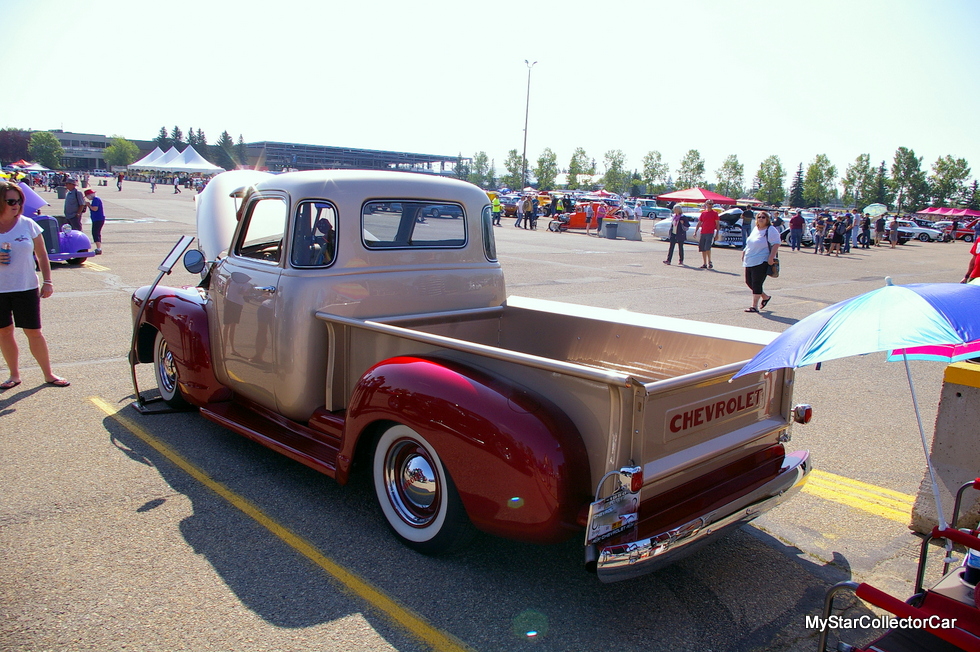 Their 2018 road adventures included a journey from Canada’s West Coast through the Rocky Mountains and they enjoyed every minute of their time with the Chevy resto mod. Ted gets the last word in this truck story: “ I really enjoy the truck because I built it.”