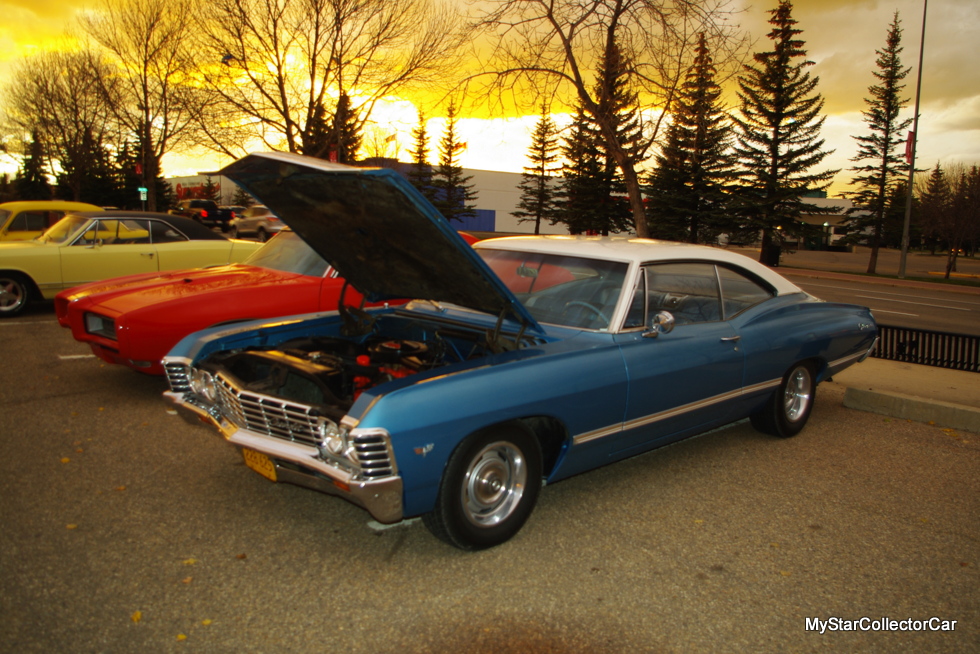 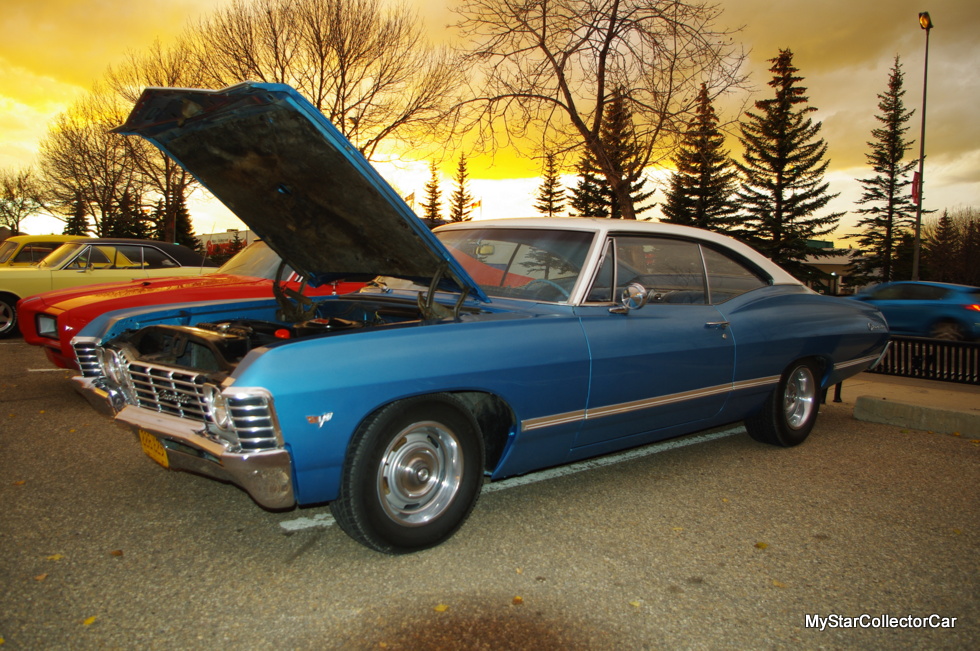 Sonny and Cher were still together both on and off the stage when they made The Beat Goes On a big hit in 1967.

1967 was also the third year for the next-generation Chevy Impala after it got a big makeover in ’65.

‘The ’67 Impala 2 door hardtop was a great-looking car with a roof line that swept back to the rear of the car with plenty of influence from the fastback look of the late 60s.’ 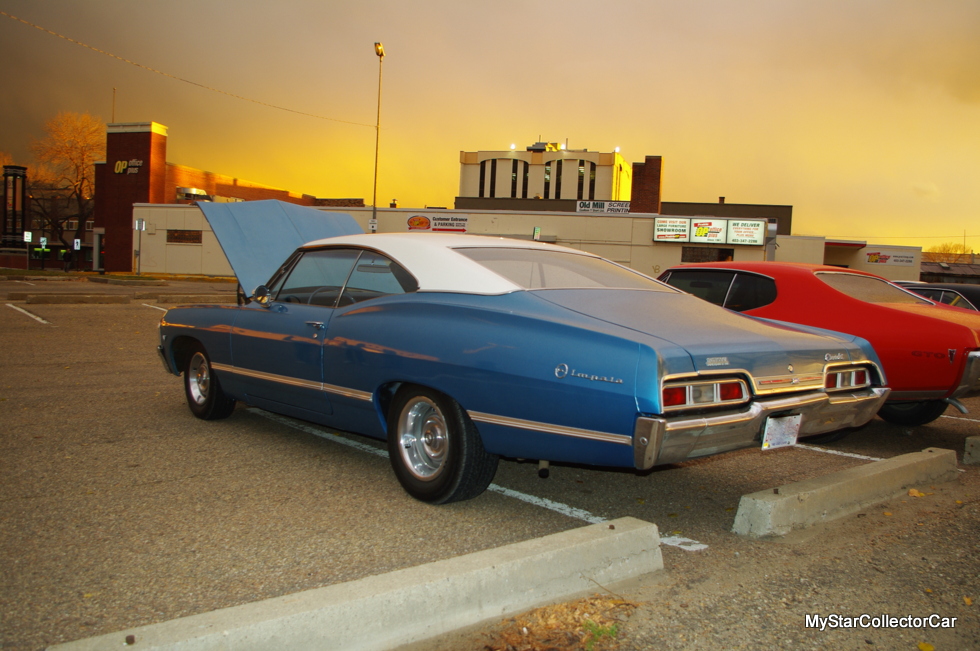 They were a full-sized ride with a very cool style during a time when most of the attention was centered on smaller muscle cars.
Rod Tennant was always a big fan of the 60s-era Chevys and wanted to own another one because he sold his 1964 Malibu over 20 years ago and wanted to jump back in the game. Rod’s search had a happy ending when he found a 1967 Chevy Impala last year. 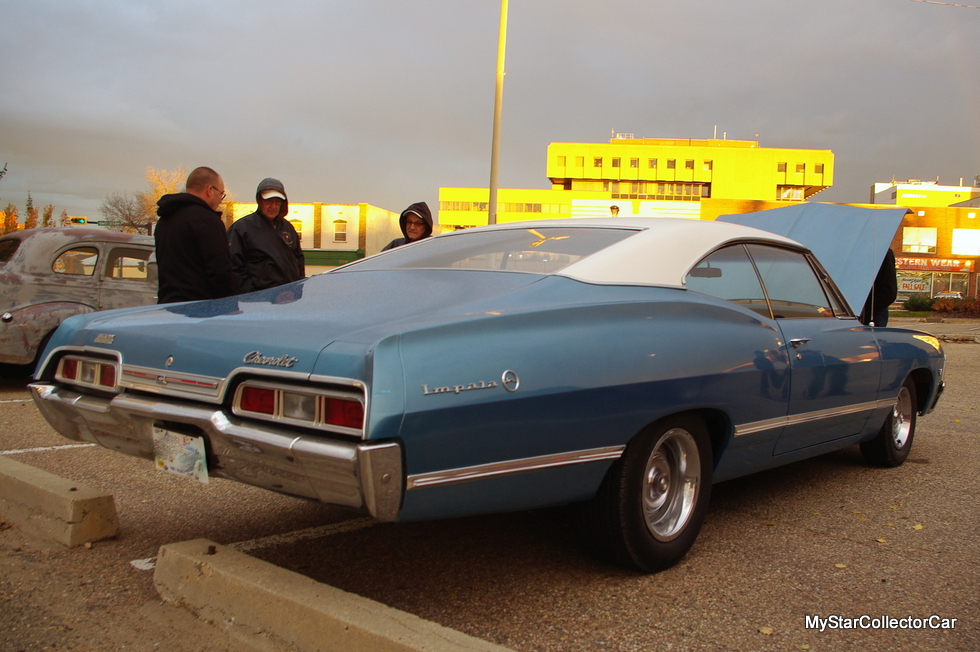 Rod spotted the car with a ‘For Sale’ sign at a British Columbia car show and purchased it from the vintage car dealers who owned it. He trailered the Impala back to Alberta and put it through a mandatory out-of-province mechanical inspection which it passed with flying colors.

The car was purchased from the original owner’s grandson by the vintage vehicle dealers and they were well aware of the car’s legacy with the family. The car was in the family long enough for the grandson to hit 60 years of age before he sold the car. 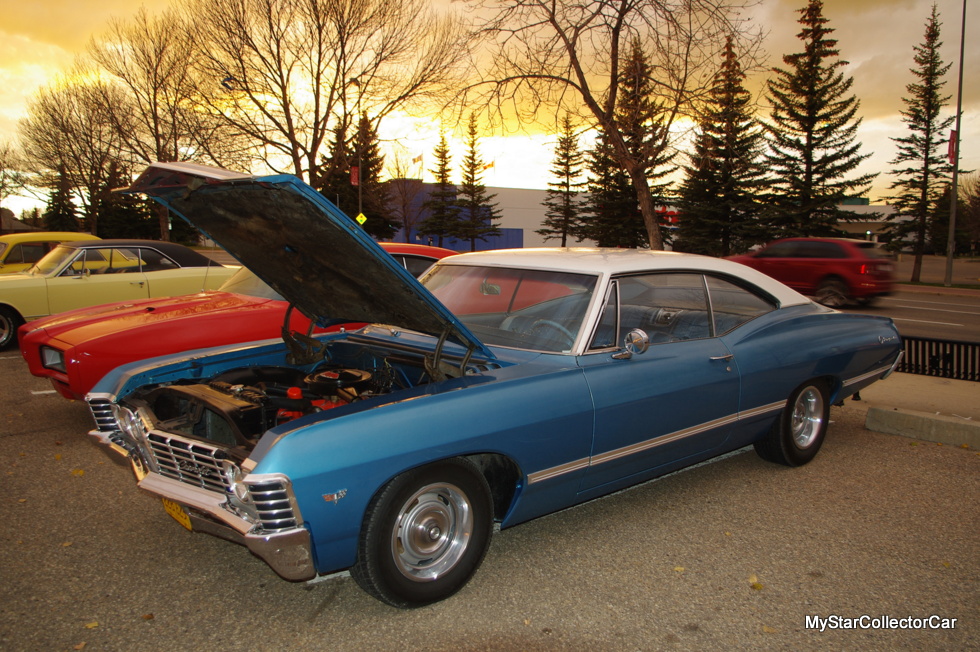 The Impala was pampered by the family over the many decades since Grandpa left the dealership and shows few signs of wear and tear over the past 49 years. In fact, the car only has 47,000 original miles on its odometer and still has its original paint from the factory. 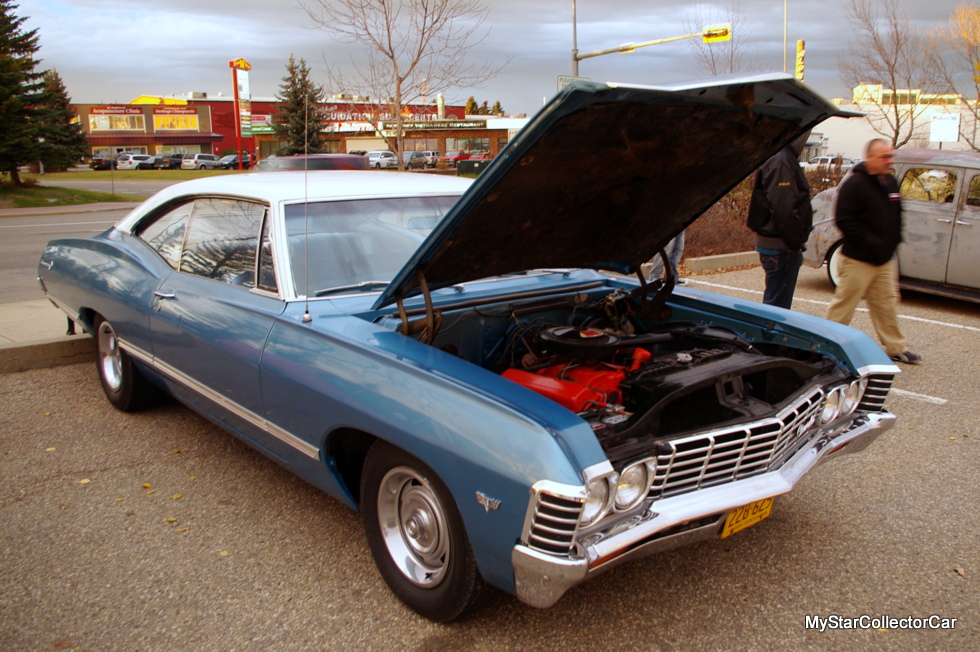 Rod changed out the alternator belt on the Impala and is quite certain it was the original belt because of the condition of the car.
Rod’s Impala has power brakes, power steering and a lively little 283 small block under the hood. The original 2-speed Powerglide automatic transmission still performs very well and Rod has no plans to change out anything on the Impala’s power train. He added; “Unless the engine blows, I have no plans to replace it.” 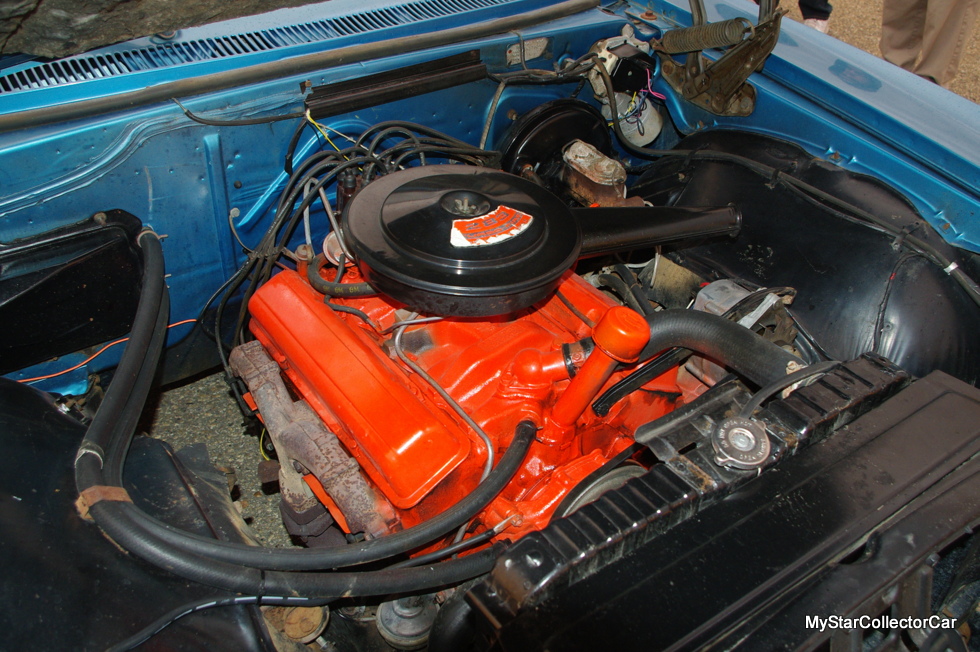 Rod said his driving experience is “pretty much everything he expected” from his Impala and that assessment is a big thumbs-up from him. He says he can cruise at 75 mph (125 km/h) and his Impala “goes straight down the road”, in his words. Rod added the car comes alive after it hits 30 mph and gives the second speed in the Powerglide tranny a chance to wind out a bit. 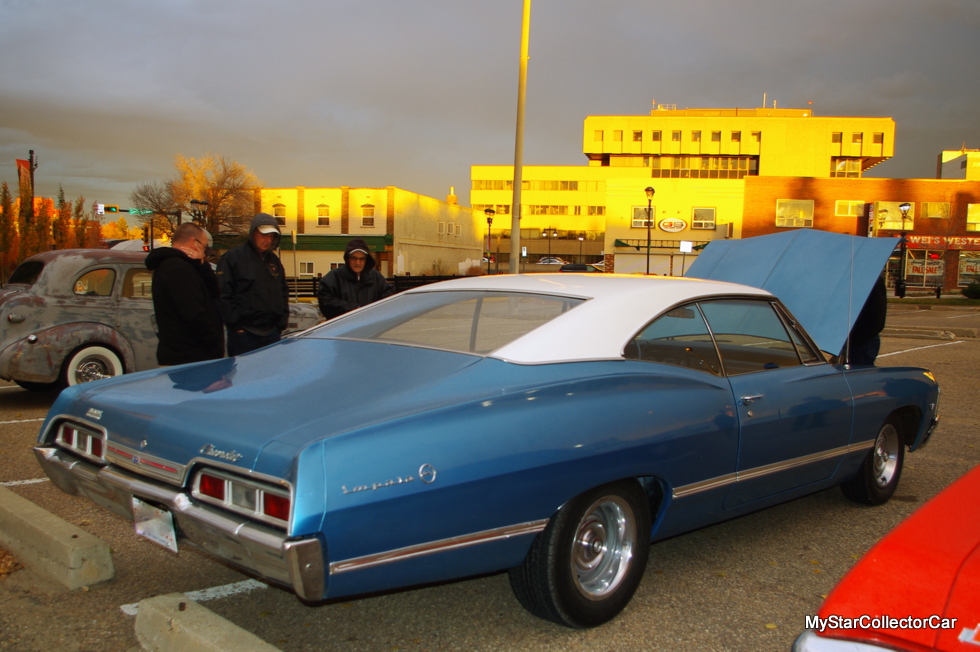 The Impala has averaged between 21 to 24 mpg on the highway during Rod’s limited period of ownership so he enjoys a good balance of performance and economy with his current power train.
One side mirror on a car with a high belt line makes lane-changing in the Impala “a little tricky” according to Rod, but one mirror is exactly the way it left the dealership back in ’67. 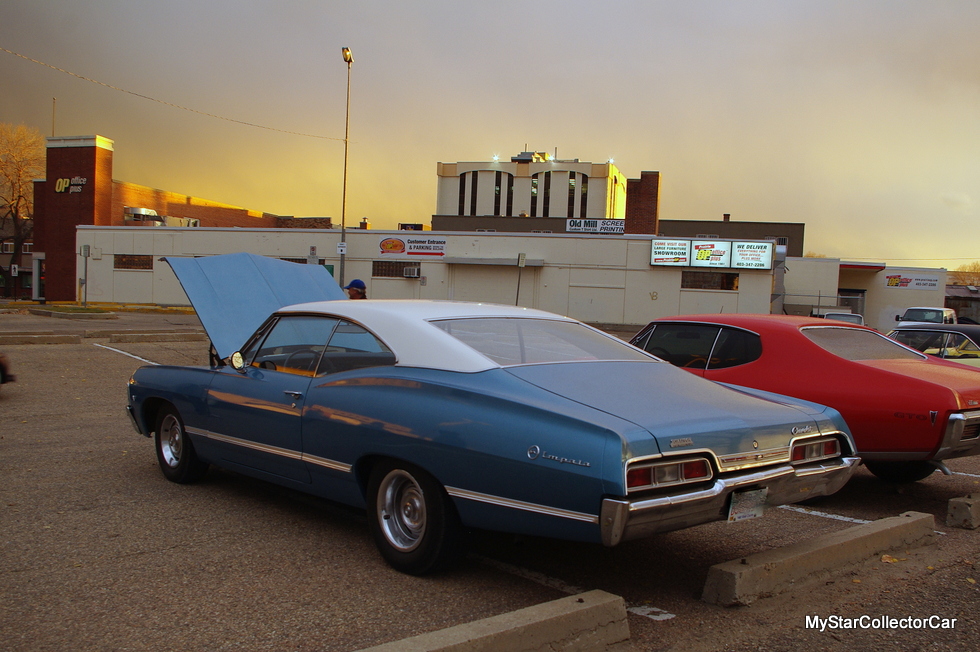 ‘We encountered Rod during his early honeymoon period with the Impala and predict it will be the start of a long relationship between this cool Chevy and its proud owner. ‘