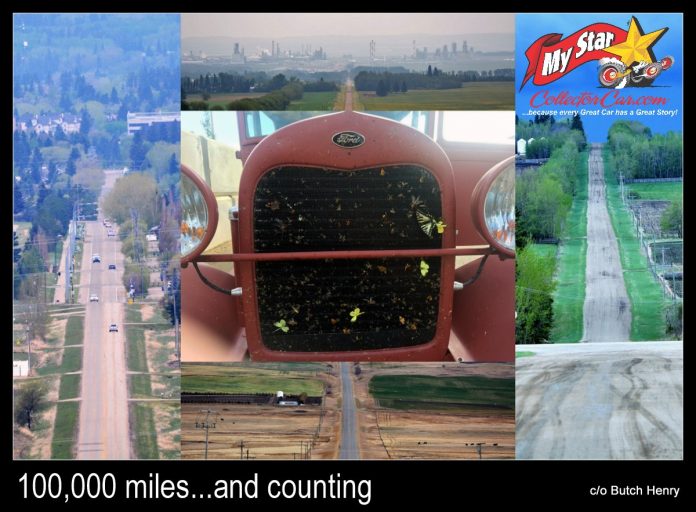 Butch Henry loves the open road, especially when he is behind the wheel of his 1929 Ford Model A Tudor hot rod.

Butch has always been a car guy who was heavily influenced by the local hot rod club (Igniters) in his hometown when he was a kid.

Eventually Butch was able to purchase a 1929 Ford Model A Tudor hot rod in the early part of the 21st century. The ‘29 Model A got Butch into the car guy game in a big way and has become his signature car over the ensuing years, mainly because he loves to hit the road in his hot rod- also in a big way.

Butch has logged over 100,000 miles (roughly 180,000 kms) behind the wheel of his trusty ’29 Ford and takes pride in the hot rod’s history of reliability over the years. The car has an aftermarket frame that was built to handle Chevy small block engines and was originally equipped with a 327 that Butch upgraded to a 350, followed by another 350 that is still in the car.

The car also has a 350 Turbo automatic transmission and a Ford 3:00 rear end, a combination that gives Butch plenty of room for higher speeds on the road. However, Butch likes to keep within the posted speed limits because he spends plenty of time behind the wheel of his Model A and thoroughly enjoys the journey.

There is a major freeway in Butch’s area, and it is a road he likes to avoid because it is a high traffic highway that does not allow Butch to enjoy his driving time in his hot rod. Instead, Butch takes the road less traveled and has racked up huge miles in the Model A on two lane highways.

Butch was not old enough to become a member of the Igniters car club when he was a kid but, later in life, he was able to join forces with like-minded car guys in his community who also love the open road.

The group hit the road under the banner of the Outkasts car club, a group of like-minded car guys who share a common bond of automotive adventure.

Butch likes the fact that he and his fellow travelers will never leave a car guy stranded on the side of the road, so he carries plenty of spare parts in his Model A, most of which have been used to fix other car guys’ vehicles.

Butch himself has spent very little time on the side of the road because his ’29 Model A has been very reliable over the years and miles. He added his Model A has “never been on a trailer”, a testimony to its durability, along with Butch’s rigid belief in driving it and not trailering it.

Butch lives in a western Canadian prairie province where winter is a big part of the year, but he refuses to let that grim fact stand in his way. He has driven his Model A countless times during the winter months and relies upon a solid aftermarket heater to keep him warm on the road. Butch has never had the heater on high because “It will cook you out”, in his words.

The Model A has front disc/rear drum brakes that will stop the car on a dime, but Butch drives defensively and has never dynamited them over all those miles on the road. He also drives with his lights on so other motorists can see him better in traffic and added an LED taillight system for that same reason.

You don’t blow by 100,000 miles on the odometer without some significant road trips and Butch has taken plenty of them, including several adventures that lasted two weeks. Butch leans toward drag racing so he makes these events part of the program on many of his runs.