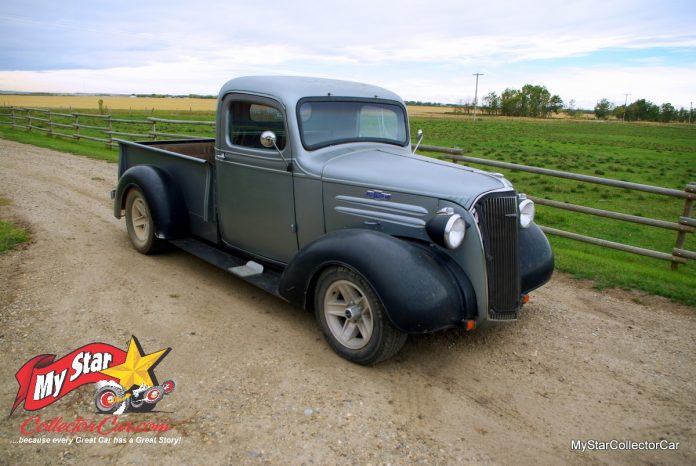 Ray Tithecott has owned his 1937 Chevy ½ ton pickup since 1978 after he purchased the truck from its former owner in Montana.

The truck and Ray were inseparable when he first met his wife, so it did not take much for her to convince Ray to keep it in the family. Ray’s wife was not a confirmed car girl when they first met, but now she is a big part of his car hobby, including their beloved ’37 Chevy.

Ray thought he would have his resto mod truck back on the road within a year, an optimistic prediction made by most car guys, but the process took about 3 ½ years, according to him. Ray was able to reintroduce the vintage Chevy back to the road in 1984 after completion of a massive makeover on the truck.

The Chevy’s original engine was swapped out for a 350 Chevy small block V-8 that delivers plenty of punch to its Turbo 400 automatic transmission. The retro changes reflect the era (early 1980s) because Ray added a Camaro front end to the ’37 Chevy, a popular resto mod choice at the time, particularly since the new front clip was already designed for Ray’s new powertrain choice.

A Buick donor car provided the coil-over suspension for Ray’s truck, and the wheels are vintage donor Camaro.

Ray also added power steering, tilt steering and power brakes to the build, but he drew the line at air conditioning because his truck already had AC in the form of an opening front windshield and fresh air cowl vent.

A 1937 Chevy pickup left the factory with one hand-operated windshield wiper for the driver, so Ray added an electric wiper system for both sides of the glass, although Ray mentioned “I’ve never used them, I rely on Rain-X and speed”.

The seat was cut and narrowed to fit the Chevy’s small cab, but Ray will likely make a few more alterations to enhance the comfort level for long trips. The close quarters in the truck and angle of the seat are noticeable when Ray drives it over long distances, so he plans to make the necessary improvements to the Chevy for the longer hauls.

There are a couple of Ford touches on the truck, including the mirrors and recessed taillights on the rear end of the ‘37 Chevy pickup. The headlights housings are original, but now include a signal light system below the headlights.

MyStarCollectorCar readers will likely notice the custom running boards on the truck. Ray built the Chevy’s running boards and firewall out of ¼ inch steel plate because he wanted extra weight on the light pre-war pickup to provide traction with the massive horsepower increase.

Ray may find himself on a trip down memory lane every time he gets behind the wheel of his ’37 Chevy pickup, but it still works on his rural property, most recently hauling posts for a fence project. Ray comes from a farm family, so it is no surprise his pickup trucks still have to work-no matter what their age.