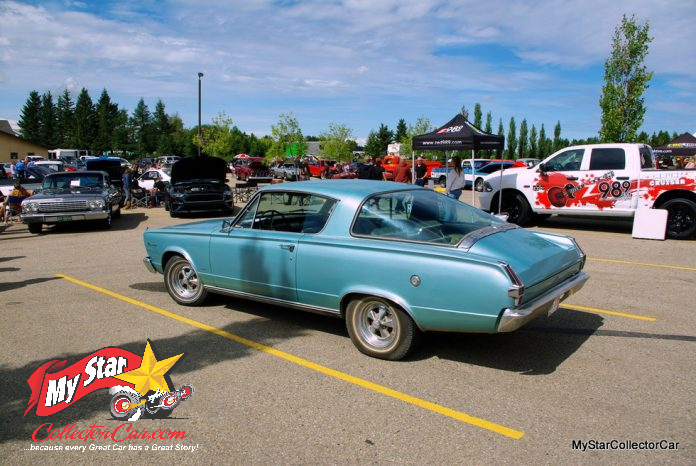 The first generation Plymouth Barracuda was introduced in 1964 and created quite a stir because of its unusual style.

The giant rear glass in the fastback roof design was controversial because people either love it or hated it.

James noted his car was “an attention-getter-kind of so ugly they’re neat”, in his words. James has owned the car for over 20 years–and he is only the second owner of the classic pony car with the fishy name.

James said he “kind of stumbled across it in an ad” and approached its former owner until the guy attached a big price tag to it. The man owned a Chrysler dealership when he gave the Barracuda to his daughter so she could use it as transportation during her university years.

Eventually she graduated from university and the ’66 Barracuda was returned to her father where it was largely stored and given limited time on the road.  Consequently, the car was a low mileage survivor car when James inquired about it.

The previous owner was “asking too much money for it” in James’ opinion when he initially tried to buy it, so no sales deal was made between buyer and seller at the time. However, James kept track of the Barracuda for the next year until he phoned the guy and eventually the former owner agreed to a price for the car.

The ’66 Barracuda still has its original 273 small block V-8 with a floor-mounted Torqueflite 3-speed automatic transmission. It’s a lively powertrain combination that still delivers solid performance on the road for James.

James noted the car is well-optioned and has most of the whistles and buzzers available in 1966 to a Plymouth Barracuda buyer. The car originally had small 13-inch wheels but James made a switch to larger tires so his Barracuda could handle the road in a more efficient manner.

However, James kept the original tires and hubcaps because he wanted to preserve the survivor status for his Barracuda.

The car still sports its original factory paint and interior and was adorned with a few bug splats because James likes to drive it whenever the opportunity arises for him. For example, he had driven the car about 50 miles (80 kilometers) to attend a car show when MyStarCollectorCar caught up to him and enjoyed every minute of the trip.

The car can easily handle the pace on the road and James admitted that he liked to drive the car “fairly fast”, in his words.

James also mentioned he and his Barracuda had also visited a drag strip where they competed in a stock class and occasionally beat the competition.

There are two ways to own a survivor car. The first way is to lock the car into storage and occasionally stare at it. The second way is to take the car back onto the road and have a lot of fun behind the wheel with it.

James is a smart car guy who made the second choice and likes to hit the open road with his survivor 1966 Plymouth Barracuda whenever the spirit moves him.

THE NUMBERS GAME: WHO OWN THESE CUBIC INCH TITLES?