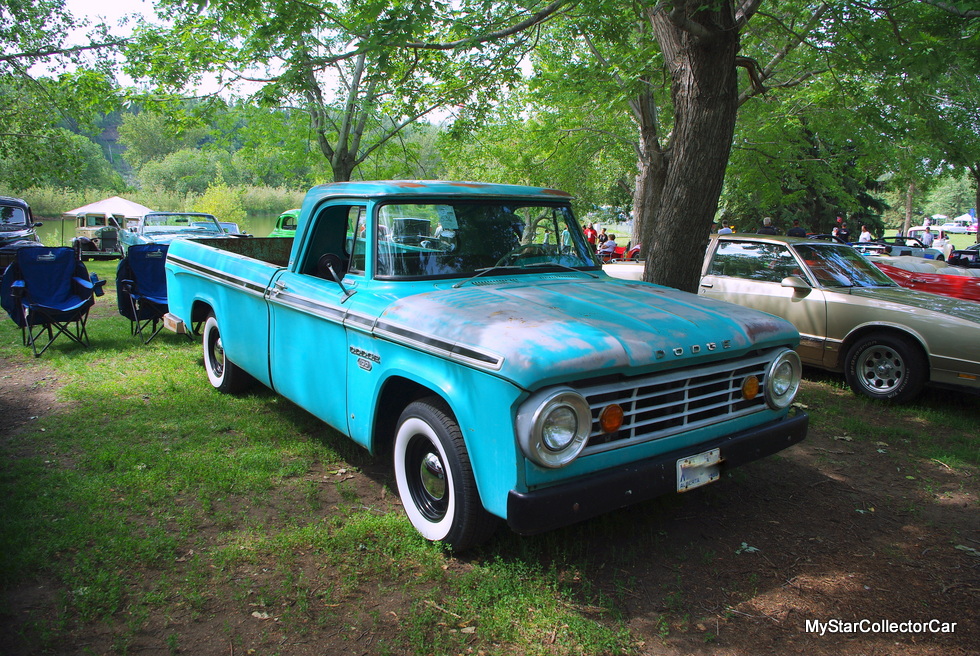 Everyone in the car hobby has some kind of brand loyalty.

You have your Chevy guys, your Ford guys and your Nash Metropolitan guys because they lean toward one brand over another. 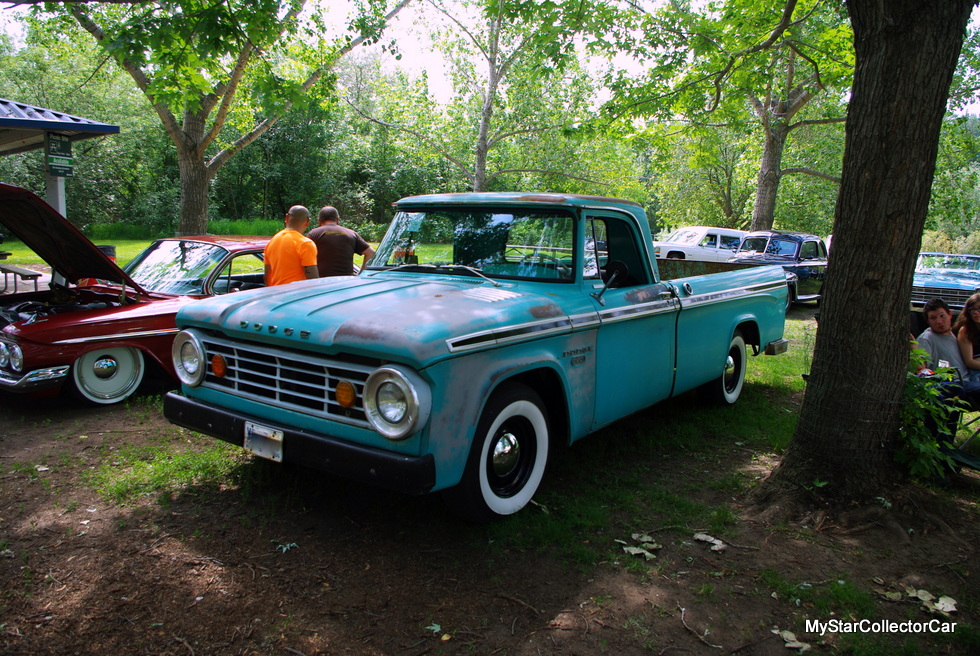 Tyler Romanchuk is a younger guy who started a search for an old pickup truck about three years ago and he only had one condition: “It’s gotta be a Dodge or Fargo (Canadian version of a D-100)” because Tyler’s “always been a Dodge guy”.

He found one in the fall of 2017 about 180 miles away in Calgary, Alberta, Canada. This was a survivor category 1966 Dodge D-100 with about 77,000 original miles on the poly 318 V-8 so it was perfect. Tyler wasn’t clear on the total history of the truck but he did know that it had a canopy on it and the last guy “played with it a bit but sold it to do a rat rod”. 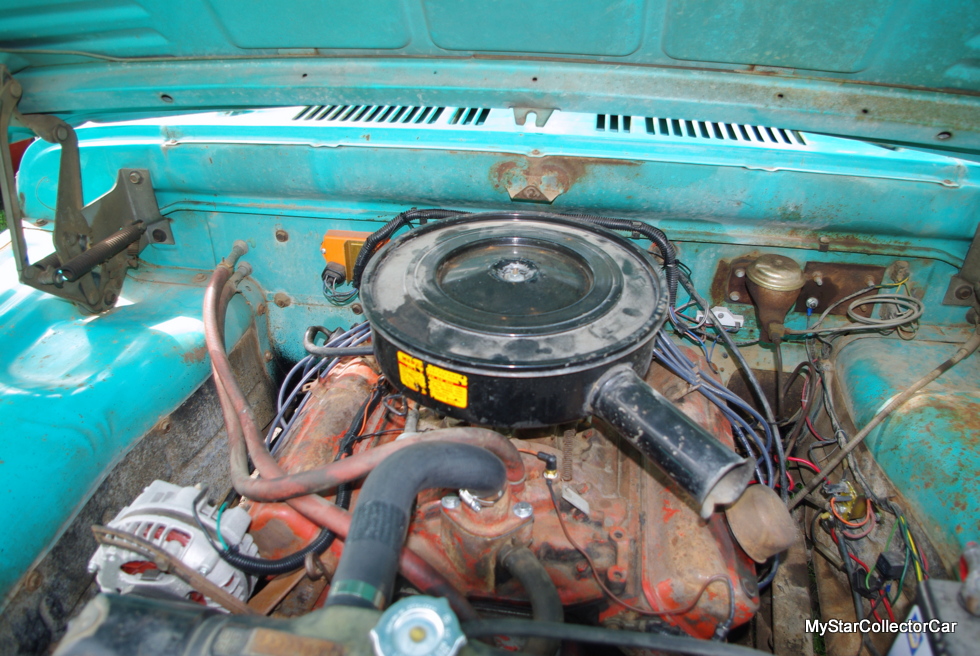 This truck wears its years well because it’s in solid condition after 52 years.  Tyler said “these bodies were bad for rusting out but this one wasn’t too bad” but he did replace the floors because they were “a little worse” than he’d expected. He admitted his brother helped with the work because he’s “a little bit faster”. 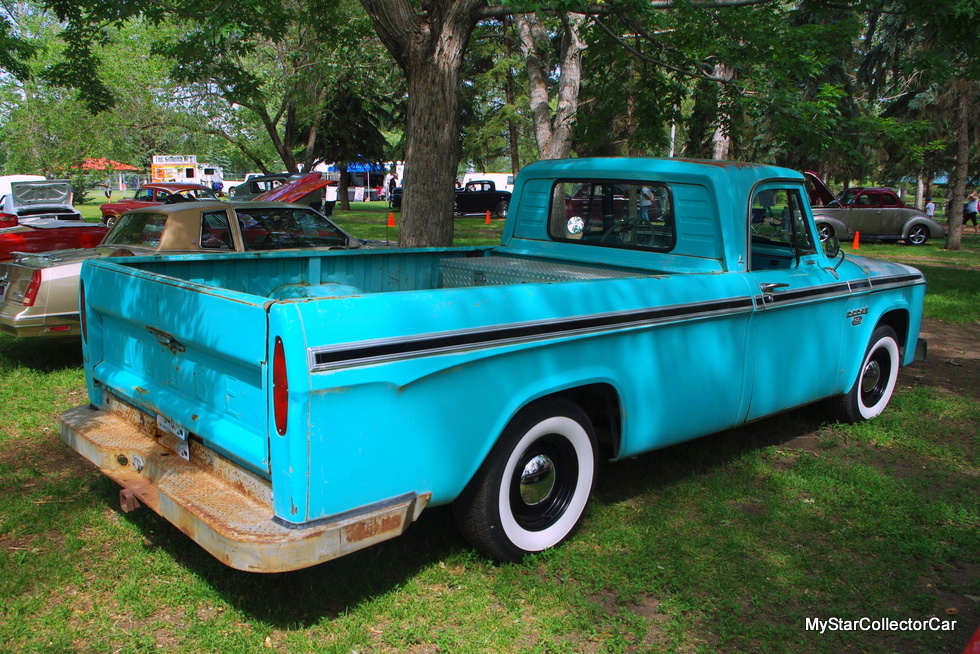 Tyler also cleaned up the interior plus he had to replace a rear seal and the motor mounts because they’d degraded over time. He’s still concerned about a carb issue because it runs a little rich but overall he’s happy with the power train in the D-100. 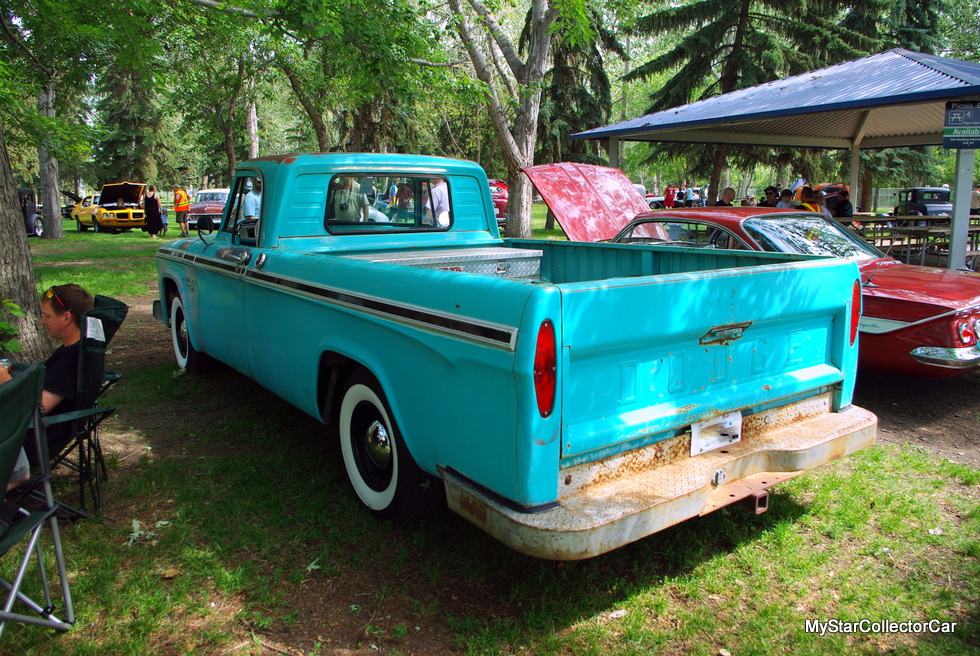 This ’66 Dodge is an odd combination because it came with radio delete but the first owner ticked off the dash-mounted automatic transmission on the option sheet. There isn’t much else because this ’66 Dodge has manual steering and brakes so Tyler is pretty happy he doesn’t have to wheel it around a parking lot on a regular basis. 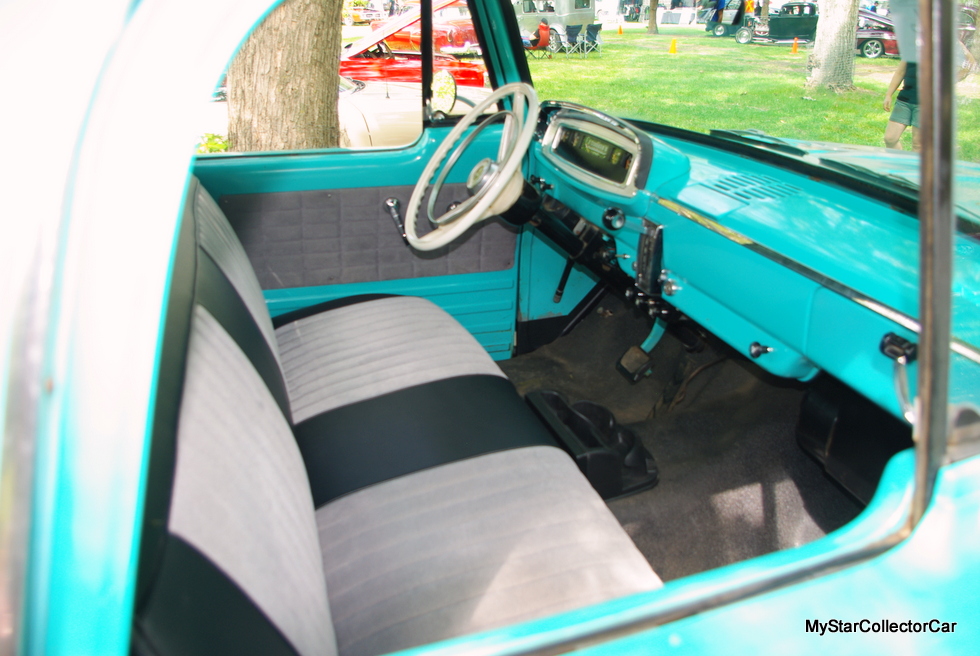 A previous owner also fabricated an auxiliary gas tank in the truck but Tyler discovered it had rotted away because it had been sheathed in plywood so he went back to the original tank behind the seat. It was in great shape because it was always inside the cab. 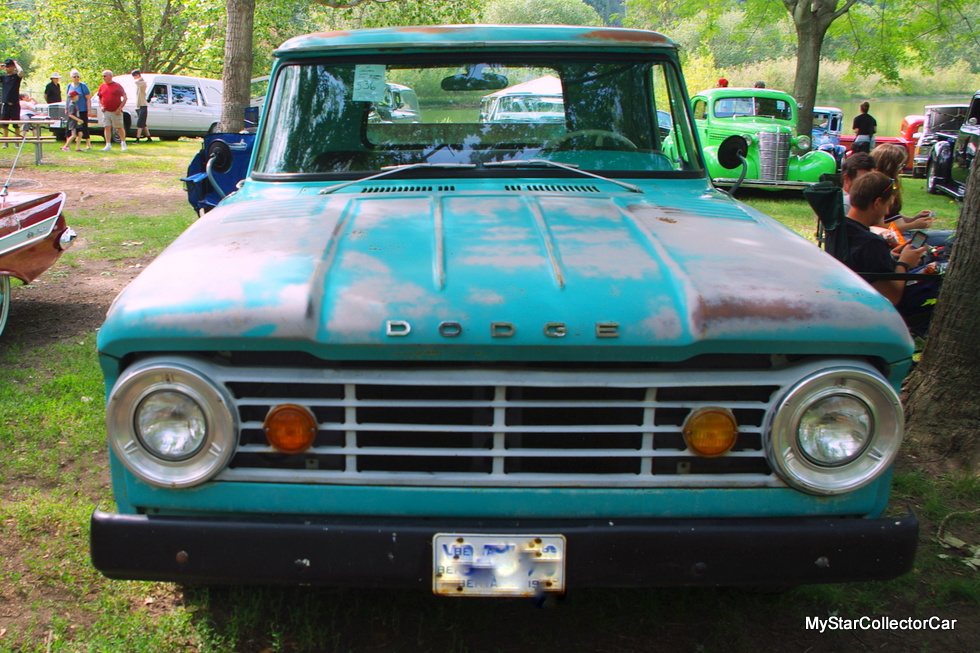 Tyler has a basic game plan with his truck—keep it original. His only concession to a cosmetic upgrade was to apply black vinyl inserts to the trim along the side of the truck. There are many reasons for his plan but an obvious one is that the truck sits outside on the driveway all winter. 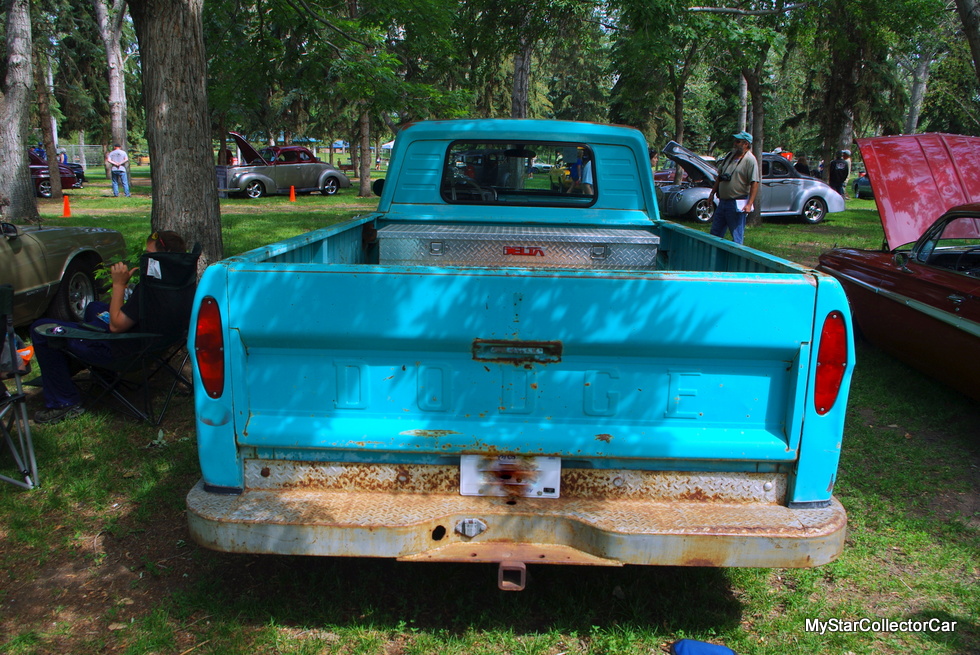 He does plan to address the weather stripping in the truck because it’s rotted away over the years and he wants to quiet down the driving experience in the cab. He’s planning on the upgrade when he tracks down the vent window rubber. 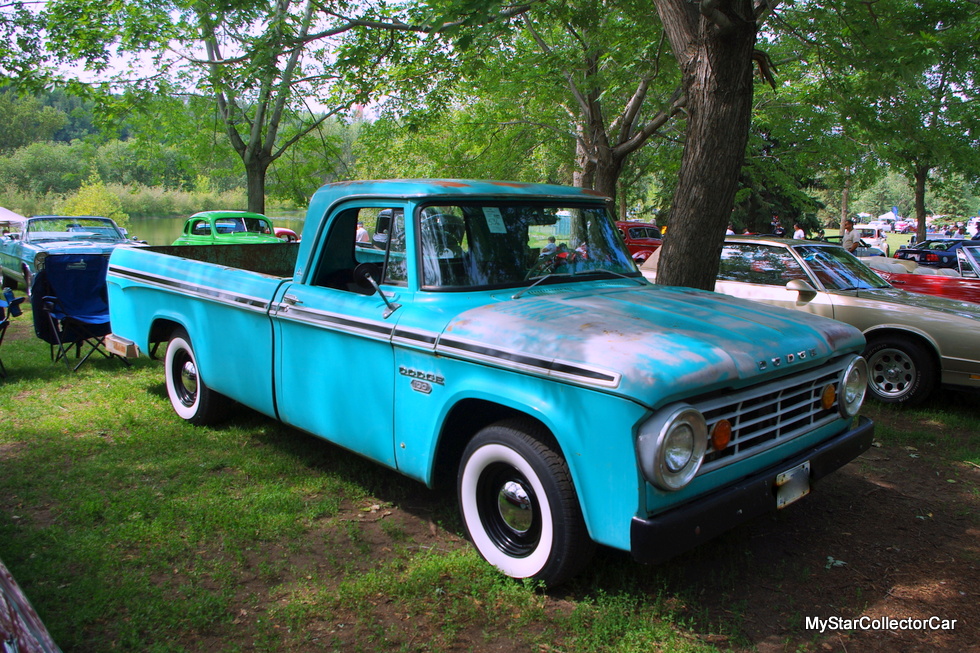 The truck “blew a little smoke” when he first started it but it went away with more use so Tyler runs the truck at 60-65 miles per hour because he finds that to be a comfortable speed. He found a tag on the rear end that said 3:91 for a gear ratio but he believes it was swapped out. He’s comfortable on the road although he said there’s “little play in the steering but it stops pretty good”. 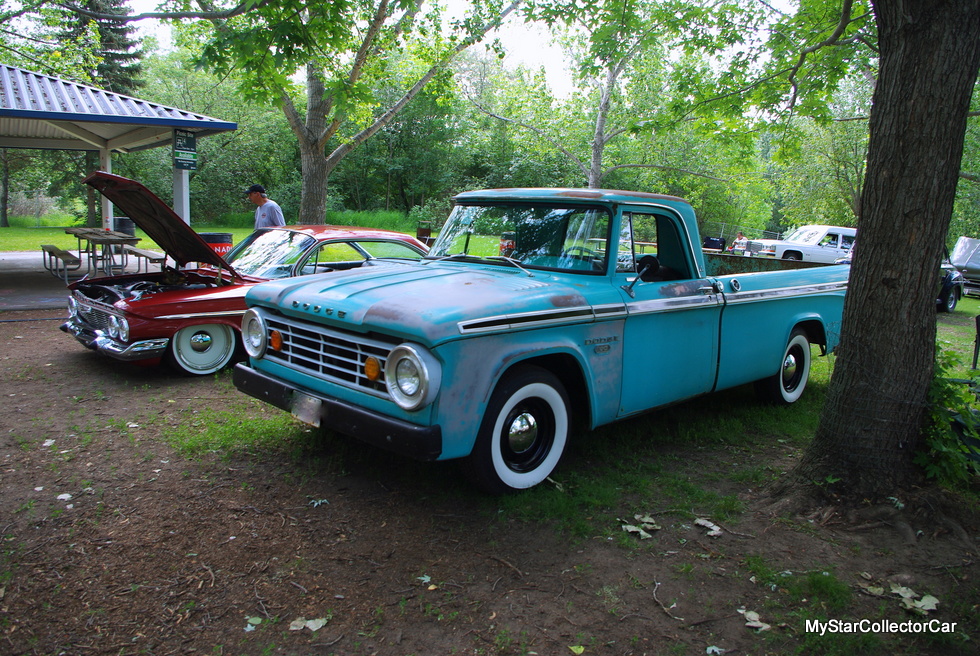 Tyler said he might “re-do the power train down the road” but the truck will not change cosmetically because “it took 52 years to make it this beautiful so why mess it up?”

COMPLICATED SIMPLICITY: WHY THE MODEL T IS GREAT PROTECTION AGAINST LOWLIFES

MSCC MARCH 27 “WHAT’S IT?” WEDNESDAY—IT STARTS WITH A TAILLIGHT AND...

CHRISTMAS CHRISTINE…A 1963 CADILLAC CONVERTIBLE STEALS THE SHOW IN A CHICK...