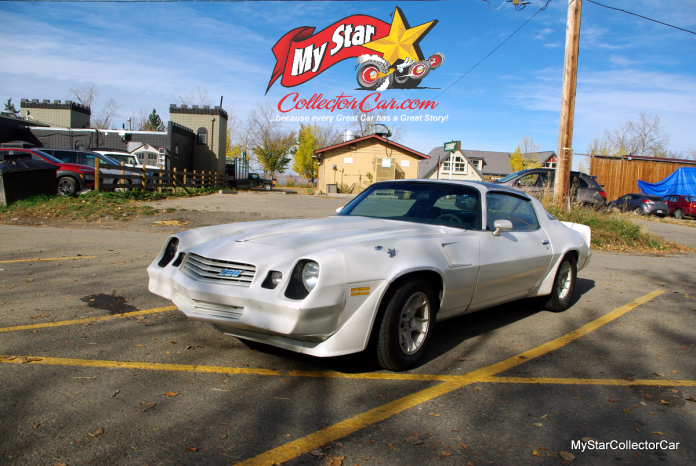 Camaro is a legendary name in the pony car category because this GM car brand has always able to gallop with the best of them, including the iconic Ford Mustang.

There was a major shift in strategy between 1967 and ’81, largely due to a thick book of new auto regulations that strangled the life out of high-performance engines during the 1970s. The result was a herd of gelded pony cars that were no longer able to deliver tire-melting performance to their lead-footed young customer base.

The new strategy was an overall Camaro body design that was both sleek and cool, particularly in T-top editions that offered convertible-like openness in a coupe edition. T-top cars became a major component of the sportier domestic cars during the back nine of the 1970s and the front nine of the 1980s, so the 1981 Camaro was a perfect choice for this unique roof design option.

MyStarCollectorCar spotted a 1981 Z-28 T-top at an autumn Camaro show and was able to track down its owner for an interview. Kyle St. Laurent. Kyle had been the latest official owner of the Camaro for only a brief period of time when MyStarCollectorCar interviewed him, but he was very familiar with the car because Kyle was aware of the car for the past 30 years. In other words, most of his life.

The Camaro had strong links to his family and Kyle had grown attached to the car over the years. It was originally a blue car, but his uncle was a body man and painted it white in the past. In fact, the car has two paint jobs on it since its blue days, but Kyle was quick to add his Camaro is essentially an original car — outside of the paint change.

Even the damage to the front fender was the result of somebody falling on it and is now part of the ’81 Camaro’s long legacy in Kyle’s world.

Kyle heard through his family grapevine the Camaro was up for sale and immediately declared “I want it” because he has always had fond memories of the car.

Kyle retrieved the Camaro from another province about six weeks before the interview and was able to register the car in his province after a rigorous mechanical inspection process that required a few repairs to make it roadworthy.

Kyle believes in safety, so he made the repairs so it could pass the inspection. Mechanical aptitude runs in Kyle’s family because his father was a mechanic, so Kyle became a car guy at a young age.

The important part of the equation was Kyle’s ability to finally own a car that has always been important to him. He will spend the winter mapping out his future game plan with the ’81 Camaro, including how far he wants to proceed with improvements to the car.