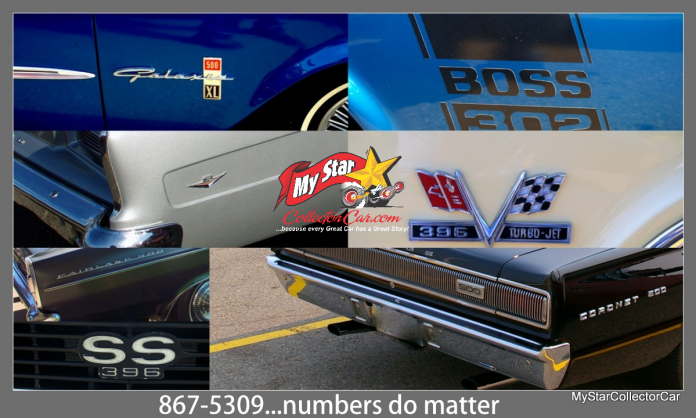 The 1980s was a decade that nearly died from great song starvation.

It was not a memorable musical era in every sense of the term, although every red-blooded male on the planet knew Jenny’s phone number was 867 5309. We at MyStarCollectorCar are old enough to remember Jenny’s number and name-even if we got the info from Top 40 music on our car radios at the time-and not on a wall.

But we also recall five memorable car names and numbers from the past that got our attention in a big way (then and now), so we decided to list them.

The first name and number that jumps off the table is the Ford Fairlane 500 model that graced the Blue Oval lineup from 1957 until it stepped aside for the Galaxie 500 model as a Blue Oval flagship model in 1962.

The 500 in the Ford models suggests a link with the famous Indy and Daytona 500 races held annually in the US, while Fairlane bonded the cars with the new freeway system in the States. The Galaxie was clearly interstellar word play, given the earthlings’ race to outer space at the time.

Ford was not alone when it came to 500 as a model number because Chrysler was our second addition to the name/number list since they used the same digit (500) on several of its Dodge models, including Mopar’s Monacos, Coronets and Polaras from the 1960s.

The name and number combination also linked Dodge’s 500 models with top-of-the-line trim and luxury appointments that ensured onlookers would know the extra bling meant more dollars spent on the cars and a loftier image for the owner. Maybe even a Fortune 500 image.

Our third member of the name/number list for car guys are the Chevy SS models that listed the cubic inches on their fender badges. There was nothing “sleeper” (i.e., an automotive version of a wolf in sheep’s clothing) about a Chevelle or Camaro SS 396. It was a name and number that warned other drivers to avoid a street confrontation with one of these Bowtie beasts at all cost.

Occasionally, the SS model’s number was upgraded to a monstrous SS 427. The best and baddest 427 cubic inch Chevy versions were known as Rat motors and few of them were challenged on the street by other drivers if they wanted to avoid crushing defeat.

The Six and V-8 numbers indicated the engine type under the hood of the mid-sized Rambler models, although neither version produced neck-snapping performance on the road. Nevertheless, the Rambler name with these two number choices definitely belongs on our list because the cars’ unusual design will link them permanently with homely but noteworthy cars from the past.

The fifth and final name/number vehicle on our list is the famous Mustang Boss 302 model. This pony became an instant legend because the Boss 302 was built to satisfy Trans Am racing circuit production numbers so Ford could compete head-on with its automotive rivals in this race league.

Trans Am regulations limited engine displacement to 305 cubic inches, so Ford came under the wire with its lively 302 small block coupled to a four-speed manual transmission. The Boss 302s were also equipped with Ford’s best brake, steering and suspension components right from the factory, features that gave the cars a healthy advantage on the track and street.

MYSTARCOLLECTORCAR MAY 2020 CAR SHOWS AND EVENTS